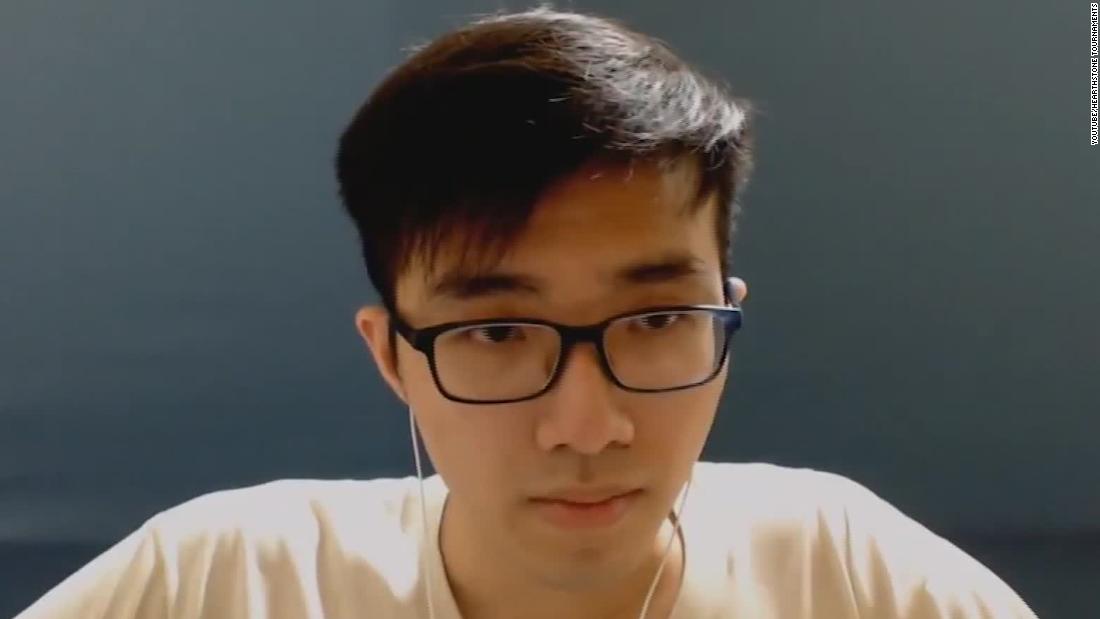 New York (CNN) Video game company Blizzard Entertainment walked back some penalties on an esports player who aired support for the Hong Kong protests after gamers around the world called for a boycott of the company.
Blizzard explained Friday that it disqualified Hearthstone player Ng “Blitzchung” Wai Chung for shouting the protest slogan “Liberate Hong Kong, revolution of our times” because it was a violation of rules that he had acknowledged.Anything that brings a player into “public disrepute,” offends the public, or damages Blizzard’s image would lead to a ban and loss of prize money, according to the competition rules.The company said that it will reduce Ng’s suspension to six months from a year, and return lost prize money.Ng told CNN Business it is about $10,000 in winnings.”We’ve had a chance to pause, to listen to our community, and to reflect on what we could have done better.In hindsight, our process wasn’t adequate, and we reacted too quickly,” J.

Allen Brack, president of Blizzard Entertainment, wrote in a statement published Friday.The lengthy statement from Activision Blizzard ( ATVI ) , the maker of games including Call of Duty and World of Warcraft, walked back the full-year suspension while explaining why it believes a penalty was justified.”There is a consequence for taking the conversation away from the purpose of the event and disrupting or derailing the broadcast,” Brack said.

Read More Ng responded to Blizzard’s decision in a Twitch livestream Saturday morning.”I’m grateful to Blizzard for reconsidering my ban,” he said.

“I think half a year [ban] is still pretty long.It’s still quite a loss to me, as an esports player.” He said that although he knew airing political views on a broadcast was against the rules, he did so anyway because he wanted to shine a light on the Hong Kong protests.The money is “not important,” he said on Twitch.”If I really cared about money, I wouldn’t have said anything on the stream during my interview.” Businesses have become ensnared in Hong Kong’s pro-democracy, anti-government protests, which are now in their fourth month.

Beijing has taken a hard line on some global companies and brands.It scrubbed television show South Park from the Chinese internet after an episode criticized censorship, and pulled NBA preseason games off the air after Houston Rockets general manager Daryl Morey tweeted in support of Hong Kong.Apple took down an app used used by Hong Kong protesters this week, saying it was being used to target police.”Activision Blizzard’s statement is totally inadequate given the circumstances,” said Rod Breslau, an esports and gaming consultant, “It took over five days for Activision Blizzard to finally give a response, much more than it took the NBA or Apple, and it can be argued they took the worst possible stance of the three.” Gamers have accused Blizzard of appeasing China’s communist-led government.

In response to the disqualification, some fans called for boycotts.Others drew fan art or made memes of a Chinese character within the Blizzard-owned video game “Overwatch,” recasting her as a Hong Kong protester in a bid to get that game banned in China.

On Tuesday, a small group of employees walked out of its Irvine, California, headquarters in protest.Blizzard stated Friday that “our relationships in China had no influence on our decision” and that if a player had shouted a pro-Beijing slogan, they would also be dealt with the same way.Chinese ties Other American video game companies with Chinese business ties have spoken out this week on how they would treat political views on broadcasts.The CEO of Fortnite maker Epic Games, Tim Sweeney, tweeted this week that despite Chinese tech giant Tencent’s roughly 40% stake in the company, he was still the controlling shareholder and would allow players to express political views.

Riot Games, a video game company owned by Chinese tech giant Tencent, said Friday that it won’t allow any political statements on its broadcasts.Political and religious “topics are often incredibly nuanced, require deep understanding and a willingness to listen, and cannot be fairly represented in the forum our broadcast provides,” John Needham, global head of Riot’s “League of Legends” esports, tweeted Friday.”Therefore, we have reminded our casters and pro players to refrain from discussing any of these topics on air.” Riot spokesman Joe Hixson clarified to CNN Business that meant “political statements of any kind — Trump, Brexit, Hong Kong, etc.— won’t be aired.” “Activision, Riot, the guys who are there are playing by the Chinese rules,” said Michael Pachter, an analyst at private financial services firm Wedbush, “The guys who aren’t there either won’t play by the Chinese rules or the Chinese don’t want them there because they don’t trust them.”.