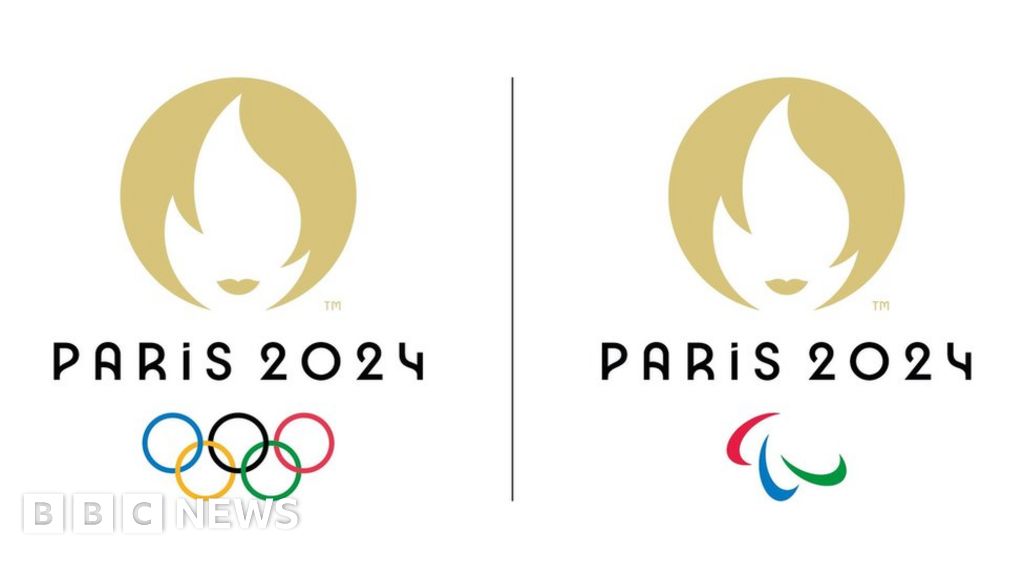 Image copyright Getty Images The logo for the Paris 2024 Olympic Games has been unveiled to both praise and mockery on social media.
The new design at once depicts the Olympic flame within a gold medal, and the hair and lips of Marianne – the personification of the French Republic since the 1789 revolution.
Organisers say the logo brings together iconic symbols of sport, the Olympics and France.
But some joked that it would be better suited to a dating site or hair salon.
The logo – which will for the first time be used for both the Olympics and Paralympics – took a year and a half to be created and was first unveiled in Paris on Monday.
What is the design? The new design marks a change in direction from the colourful depiction of the Eiffel Tower used as the logo in France’s bid to host the 2024 games.
Organisers said the three symbols were intended to be “both simple and powerful”.
The gold medal symbolises “striving for excellence”, while the flame “reflects the unique energy” of the games, they said.
Skip Twitter post by @Paris2024 🥇🔥🇫🇷
La médaille, la flamme, Marianne.
Voici le nouveau visage des Jeux Olympiques et Paralympiques de #Paris2024
The medal, the flame, Marianne
Here is the new face of the Olympic and Paralympic Games of #Paris2024 pic.twitter.com/6VvsItrql6
— Paris 2024 (@Paris2024) October 21, 2019 Report End of Twitter post by @Paris2024
The image of Marianne was incorporated as a reminder that the 2024 Olympics are for everyone in France and in homage to the female athletes competing, they added.
Marianne is also being used as a nod to history – women participated in the Olympics for the first time in the Paris Games in 1900.
The logo is accompanied by the words “Paris 2024” in an art deco-style font, which was popular when Paris last hosted the sporting event in 1924.
Look back at the Olympic logos of recent years Breakdancing moves step closer to Paris 2024 inclusion Esports ‘in talks’ over Paris 2024 demonstration “The combination of the gold medal, the Olympic flame and Marianne brings together the values, history and French touch that will make these Olympic Games truly special,” Pierre-Olivier Beckers-Vieujant, chair of the International Olympic Committee Coordination Commission, said of the new design.
“I believe that this innovative design will be quickly recognised around the world and be a wonderful calling card for the Olympic Games Paris 2024.”
How have people reacted? Many people have praised the design as a fitting tribute to France and the Olympics.Government spokeswoman Sibeth Ndiaye was among those to describe it as magnifique (magnificent).
But the new logo has also inspired a slew of jokes online.
Some social media users said the new design looked more like a modern chic Parisian woman than Marianne, while others suggested the designers appeared to have taken inspiration from the logo of popular dating app Tinder.
Skip Twitter post by @JAJeanAlexis Le logo des #JO @Paris2024 dévoilé, à ne pas confondre avec @Tinder , bien que ce soit un beau clin d’œil à la culture Française ! 🇫🇷🔥
Sinon, un super article à lire traitant sérieusement de ce logo sur @lemondefr sous la plume de @NLepeltier ! 🖋️ https://t.co/nPXZ6YWQep pic.twitter.com/US0LhleICw
— J.A.(@JAJeanAlexis) October 22, 2019 Report End of Twitter post by @JAJeanAlexis
One of the most common jokes about the new logo was that it looked like an advert for a hair salon or product.
“Is this a new range of shampoo?” one Twitter user asked in French.”A new hair salon will open in Paris in 2024,” said another.
Skip Twitter post by @gregthanas pic.twitter.com/LKfpXINoOP
— Grigoris Thanasoulas (@gregthanas) October 22, 2019 Report End of Twitter post by @gregthanas
Others said it looked like an emoji or a cartoon character.
Paris 2024 is not the first Olympic logo to be met with mockery.The brightly coloured London 2012 design was widely ridiculed after being unveiled in 2007.
You might also be interested in: How a proud mum’s Facebook post got her kids into the Olympics
Media playback is unsupported on your device Media caption Siblings Latroya, Troy and Jayla Pina have been picked to swim for Cape Verde at the 2020 Olympics.