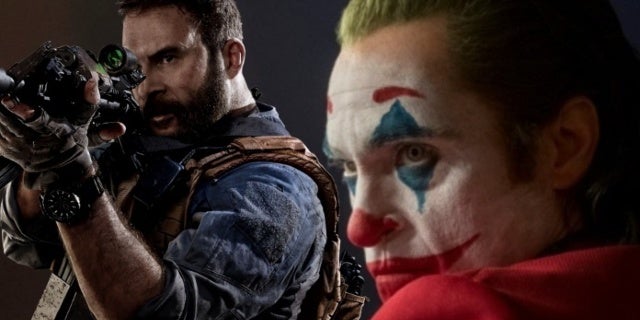 Activision Blizzard shared some numbers this week regarding Call of Duty: Modern Warfare’s launch and touted some impressive claims and milestones for the series overall. One of the comparisons made in the company’s news release about the game’s debut made sure to point out that Modern Warfare soared past the opening weekend profits for Joker , the standalone DC film which released earlier in the month. Modern Warfare reportedly brought in $600 million within its first three days, Activision said, while Joker brought in $248.2 million .
The announcement from Activision Blizzard can be seen on its investors site where it detailed the accolades Modern Warfare has now earned on different scales. A $600 million figure was provided for the game’s worldwide sell-through total, and Activision Blizzard’s CEO, Bobby Kotick, made the comparison to Joker .
“Call of Duty is once again the top selling new premium game of the year, proving the enduring nature of the franchise across console, PC, mobile, and esports,” Kotick said. “In its first three days of release, Call of Duty: Modern Warfare more than doubled the box office opening of Joker .”
Seeing a game triumph like this over a movie isn’t all that uncommon especially when you consider that Modern Warfare started at a $60 price tag and only went up from there depending on what edition you wanted. That doesn’t make the $600 million earned by Modern Warfare any less impressive though even if it was a predictable outcome considering how excited people have been for the new Call of Duty game compared to previous installations in the series.
A more apt comparison to another major game released around the same time last year better shows how Modern Warfare did. Compared to Modern Warfare’s $600 million, Rockstar Games’ Red Dead Redemption 2 earned over $725 million during its first three days .
Rob Kostich, president of Activision, thanked everyone who was involved in Modern Warfare and said this is just the start of what’s to come. 0 comments
“Through the first three days, Modern Warfare has more total players and total hours played than any Call of Duty opening release in the last six years. More importantly, our players are having a great time playing,” Kostich said. “Congratulations to Infinity Ward and all our teams involved on an incredible game and its spectacular launch. We also want to thank the community for your incredible support. The launch of Modern Warfare is only the start. There’s much more to come.”
Call of Duty: Modern Warfare is now available for the PlayStation 4, Xbox One, and PC platforms.