HomeEsportsLeague of Legends: Millions catch a glimpse of the ‘future’ at Worlds – CNN 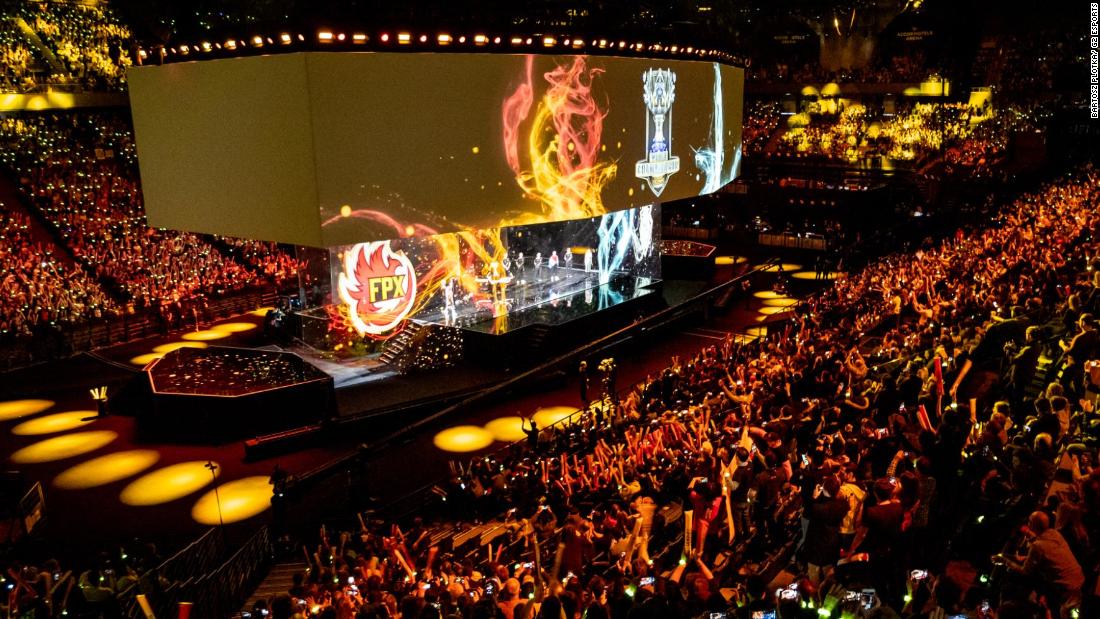 League of Legends: Millions catch a glimpse of the ‘future’ at Worlds – CNN

(CNN) Millions of online viewers tuned in to watch the League of Legends World Championship final Sunday and were treated to a thrilling finale.
FunPlus Phoenix beat favorite G2 Esports in all three of its games to lift the trophy but the final in Paris arguably pushed the boundaries of what people will come to expect from a live event.Organizers relied on innovative graphics, music, and holograms to create a spectacle which wowed the 15,000 spectators in the arena and the online audiences around the world.Official viewership figures have yet to be released but, without counting Chinese or TV audiences, 3.7 million peak concurrent views were recorded — double the figure last year.The final in 2018 attracted an online audience of over 100 million through streams on platforms such as YouTube and Twitch.Despite his team’s defeat, G2’s founder and owner Carlos Rodriguez says the grand final was a remarkable occasion.Read More “Those visuals combined with music is actually the future,” Rodriguez told CNN Sport.”As technology gets better and more realistic, there’s a very high chance that you will be selling tickets worth thousands of dollars in a virtual stadium.” READ: Arsenal’s virtual Thierry Henry on the inaugural ePremier League READ: How to become one of the world’s best professional gamers League of Legends World Championship Finals at AccorHotels Arena in Paris, France.G2 Esports was favourite to win Worlds but looked tired in the final.

G2 vow to return Reflecting on the loss, Rodriguez says it was particularly hard to take due to the momentum G2 had prior to entering the Worlds — the team had won every tournament it played in before heading to Paris as one of the hot favorites to lift the trophy.Rodriguez believes his players had begun to feel the effects of a long, grueling season which started back in January.”Imagine it as a warrior being in the field, just battling for two, three hours and at some point, even if he wants to keep moving and keep swinging the sword, he just can’t, he just has no energy left,” said Rodriguez.”We had the chance to make history and we just couldn’t make it happen.” Despite admitting that both he and the team felt “terrible” after the loss, the organization still published a series of humorous posts on social media which poked fun at its own disappointment.There’s simply no way, right @CarlosR ? pic.twitter.com/lnzpwciV0U
— G2 Esports (@G2esports) November 11, 2019 It’s an attitude that Rodriguez has built his organization upon and one he says will prepare the team for dealing with the initial heartache.”This moment is like a muscle hitting the gym.You destroy some fibers and then you grow stronger and bigger.That’s where we stand right now,” he said.

G2 has been creeping closer to success in the World Championship finals every year and Rodriguez is confident his team will claim the top prize “sooner rather than later.” Until then, he wants his teams to continue having the fun its millions of fans have come to expect.”Whoever wants to find bad news, sad news and disappointment, there’s so many places to go all over the internet,” he said.

“When you follow us, you’re there to have fun, to laugh and to be entertained […] that’s our role in this industry.” READ: Miami Heat and Schalke back League of Legends teams READ: Inside the world’s first professional FIFA house G2 Esports founder and owner Carlos Rodriguez found the positives in defeat.’Unorthodox’ Rodriguez has told his League of Legends team to go on holiday to recharge over the off-season but work never seems to stop for the Spaniard.The former player has built an empire at G2, an organization recently valued by Forbes at $165 million, but the ambitious 29-year-old has his eyes firmly set on expanding into the lucrative Chinese market.”Our goal is to entertain and to inspire the world through operating competitive and successful teams while everybody is holding themselves to the highest possible standards,” he said, identifying G2 as an entertainment company, rather than one comparable to a traditional sporting outfit such as Manchester United.”For 2020, you should expect very unorthodox, creative pieces of content like comic books, music pieces, a lot of collaborations on top of the bread and butter which is competition.”.