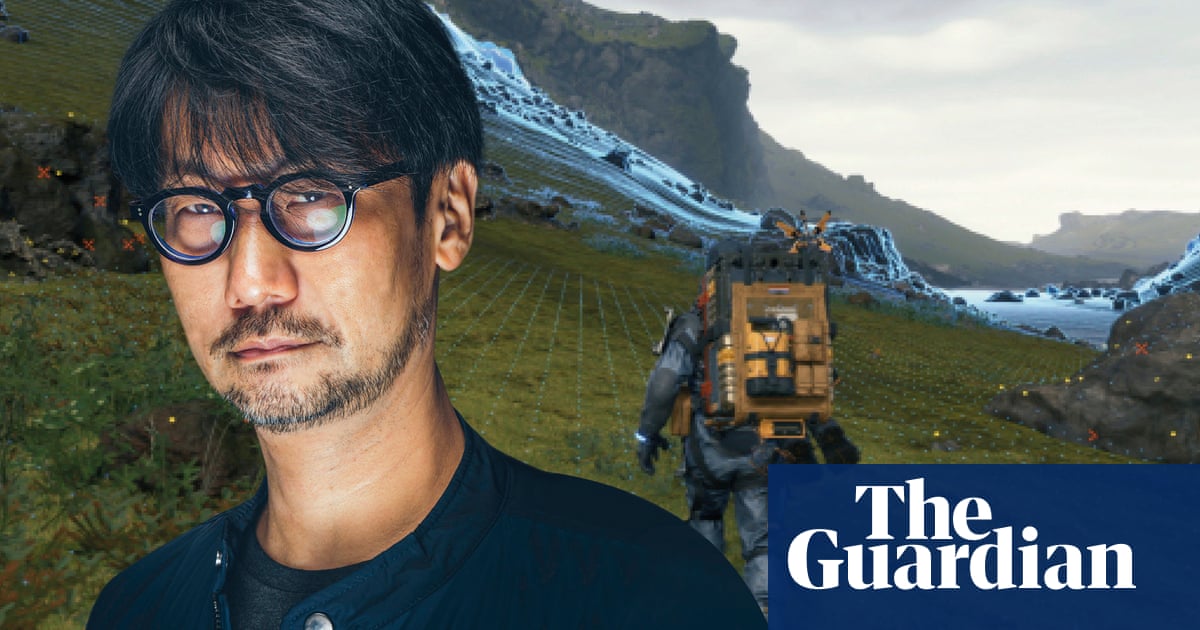 It has baffled gamers with its Brexit analogies and babies in jars, but the Japanese auteur says he’s just trying to bring humanity together.Y ou might not know his name, but with 2.8 million Twitter followers and a coterie of Hollywood disciples, Hideo Kojima is the world’s most famous video game designer.Over a three-decade career, the Japanese 56-year-old has come to be regarded by his industry peers as something akin to an auteur such as Martin Scorsese or Terrence Malick.Indeed, he has actual auteurs lining up at his feet.

“I’ll do whatever the fuck he wants,” said Oscar-winning director Guillermo del Toro of Kojima in 2016.
Del Toro features, along with the likes of Mads Mikkelsen and Léa Seydoux , in Kojima’s new game, Death Stranding .Hugely ambitious and hugely divisive, it tasks players with delivering packages across a barren America where the living and dead coexist.The focus is on bringing isolated communities together – a response, Kojima has said, to Trump’s wall and Brexit – with the game rewarding players for working together, not drifting apart.

The Guardian review compared it to “2001, The Road, The Leftovers, Silent Hill and Planet Earth reinterpreted as three days of UPS contract work”.The game has split critics over whether its profundity outweighs the 60-hour completion time, its gruelling repetition, and indulgent and often hammy storytelling.Would Hideo Kojima care to explain himself?
Facebook Twitter Pinterest Uncanny valley…Norman Reedus and Léa Seydoux in Death Stranding.Photograph: Kojima Productions
“This is about an era of individualism.Everyone is fragmented, in America or Europe, but at the same time we’re connected by the internet.

This magical technology should have made people happy, but we’re battling each other,” Kojima explains from the sofa of a central London hotel.He is in town for the launch of the game, which has been more than three years in the making and is one of 2019’s most feverishly anticipated releases.Yet Death Stranding also stands apart from its blockbuster gaming peers, prioritising a theme of “connection” over traditional video-game violence.“On the internet, like in games, we’re all competing for a headshot,” Kojima says.“Of course it’s fun, but we’re animals and can’t live alone.I want people to experience the meaning of connection through Death Stranding’s world and its systems.”
As video games start to resemble on-demand services, delivered in Netflix-style chapters such as cultural-phenomenon shooter Fortnite , Kojima stands as a lone auteur, obsessing over the texture detail of a doorknob, and inserting tonally jarring gags about Flavor Flav into Death Stranding’s most earnest scenes.The game’s painstaking focus on preparing to deliver parcels – you need to balance your cargo carefully like a Jenga stack – is a metaphor for a duty of care to others.

Players experience “connection” via Death Stranding’s online world: you will not see other players, but can leave signposts (which can warn of danger ahead or restore stamina), share items such as parcel-repair spray and contribute to construction projects, including building a bridge over one of the game’s wild rivers.
Given Death Stranding’s Hollywood cameos and its epic aesthetic, it is no surprise that, as a child, Kojima wanted to direct movies.However, he felt obliged to follow a more responsible path after the death of his father, a travelling salesman.Instead of film he studied economics, but found himself absorbed by video games at university.

He soon took a role at renowned Japanese game company Konami, where he foresaw a new era of interactive storytelling.

Kojima went on to invent “hide and seek” stealth gaming with his hugely influential PSOne hit Metal Gear Solid , but made his reputation by defying fans’ expectations.Over five games since 1998, Metal Gear told an indulgent, prescient, anti-war tale about genetics, family, legacy and the rise of the information age, while also proving totally unafraid of a fart joke.When Kojima left Konami in 2015 after 29 years, in mysterious, acrimonious circumstances, publishers worldwide queued up to offer him a blank cheque, hoping to tap into his creative kudos and devoted fans.
Facebook Twitter Pinterest
In person, Kojima looks much slicker and younger than his 56 years, with Keanu Reeves-like jet-black stubble, designer trainers and a “Kojima Productions” sweatshirt.

He answers questions in a cheerful blur, punctuated by intense nodding.Yet contrary to his sunny demeanour, he embraces the cliche of the isolated creator.

“Of course I have my sons, to whom I’m connected,” Kojima says, “but I can’t really rely on anyone, actually.That’s why I’m creating things, because I can’t rely on people, in a way.”
Death Stranding review – Hideo Kojima’s radically tough slow-burning epic Read more
Kojima’s self-reliance comes from the hardship he experienced when he was young.

“Everyone thinks I do crazy stuff, but I’m sensitive.I lost my father when I was really young.I couldn’t really speak to my dad.

I had to say: believe in yourself, and do what you believe.That’s how I lived and who I am today.” Tellingly, the Metal Gear Solid games address complex father-son relationships, but Kojima’s work seems in recent years to have moved from personal reflection to a wider social message.“Everyone has [trauma], whether they say it or not.I’m not saying: go over your trauma, but I think people should look at it as their individualism as well.You don’t need to be embarrassed.

I hope I can encourage people with trauma to be brave and just go on”.
Kojima is a master of complex emotions but his chief talent as a game designer is his ability to challenge expectations of what games are supposed to do.For example, Metal Gear Solid 3 forces players to climb a ladder for almost three minutes, inviting reflection on the bewildering one-hour boss battle that preceded it.

Metal Gear Solid V keeps doling out increasingly tough missions that force players to question why they are still ploughing on in a game about the dangers of the obsessive pursuit of “truth”.
Facebook Twitter Pinterest Game for anything…Guillermo del Toro in Death Stranding.

Photograph: Kojima Productions
Death Stranding’s gruelling 15- to 20-hour middle section, a blur of repetitive delivery missions, takes this concept to extremes.It serves as a sermon on belief; the power of putting one foot in front of another when all feels futile.It is a blunt metaphor for society’s unsustainable excess in a game that also allows you to craft poo grenades while guzzling Monster energy drinks.There is a danger of assigning Hideo Kojima too much reverence, but Metal Gear Solid 2, his most prescient work, took fans years to understand, and even predicted the dangers of digital information control 15 years before the emergence of Cambridge Analytica (the game dupes the player into believing they are a super soldier before revealing that they’re really a simulation created by a shadowy artificial intelligence network).
Kojima knows his fans crave provocation.So, after introducing the world to a postie-simulator and a psychic baby in a pickle jar, what is next for him? “I can’t say right now, but it’s something you’ve never seen,” says Kojima excitedly.

“It’s a game, but also a movie … no, I’m starting to say it! Right now, you can broadcast Esports and people watch it.What’s the next step? A creator creates a game, someone plays it, and in the future the viewers could become creators, too.I can’t say more than that.”
The tease is vintage Kojima.His output verges on performance theatre.Every interview, cryptic trailer and tweet is integral to the experience, blurring the line between games and reality.Later that night, he is speaking to a live audience at a Bafta presentation and shares the same details about his new project that he’d “accidentally” let slip during this interview.The world’s most feted video game creator may – or may not – be acting out the role of the elusive auteur, but even in these moments when the illusion unravels, you still cannot wait to find out what is on the next page of the script.
Death Stranding is available now on PlayStation 4
Topics Death Stranding Games Metal Gear Solid V interviews.