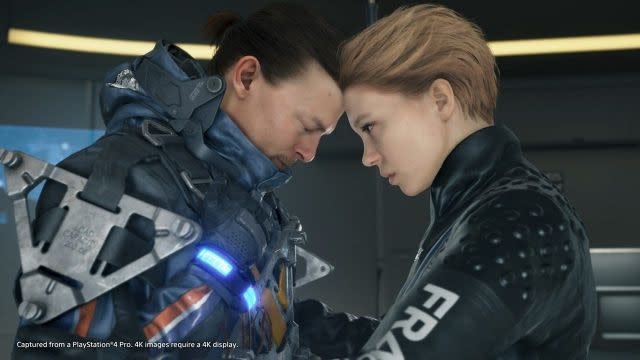 ‘Death Stranding,’ featuring likenesses of Norman Reedus and Léa Seydoux as two of its main characters More “Death Stranding,” “Control,” “Sekiro” each accumulated five or more nominations across a dozen eligible categories, including Game of the Year, with “Super Smash Bros.Ultimate,” “The Outer Worlds” and the “Resident Evil 2” remake also put forward for consideration as 2019’s best new video game.Post-apocalyptic delivery challenge “Death Stranding,” secret agency thriller “Control” and mythological warrior fantasy “Sekiro: Shadows Die Twice” lead nominations going into The Game Awards 2019, which are to be held on December 12.The trio are joined by Nintendo’s “Super Smash Bros.Ultimate,” already the best-selling title in its fighting game genre, a remake of horror classic “Resident Evil 2,” and sci-fi escapade “The Outer Worlds” in the Game of the Year category.

Those categories encompass specific genres, such as the Action-Adventure format to which five of six Game of the Year contenders adhere.Others span craft awards such as those for Creative Direction, Sound Design, and Performance, as well as a whole tranche dedicated to Esports.

Ultimate” and “Yoshi’s Crafted World.” In mobile, traditional computer and console franchise “Call of Duty” makes its debut, opposite Apple Arcade subscription titles “Sayonara Wild Hearts,” “What the Golf?” and “Grindstone,” as well as “Sky: Children of the Light,” currently iOS exclusive but awaiting Android release.Now that nominees have been announced, a public vote is underway at The Game Awards website.Winners are determined by a combined ballot in which a preselected jury contributes 90% of the vote; public voting accounts for the remaining 10%.One potential thorny issue for the 2019 Game Awards is the admiration frequently expressed by host and organizer, Geoff Keighley, for “Death Stranding” director (and The Game Awards advisory board member) Hideo Kojima.

Keighley was also one of several game industry or industry-adjacent personnel to cameo in “Death Stranding,” as was the ex-president of Famitsu Group, which publishes influential Japanese video game magazine (and The Game Awards jury member) Famitsu.The jury consists of 80 media outlets from around the world.Of those, 24 are based in the USA and 9 in the UK.

Some 20 are from European countries, 12 from South and Central America, 9 from Asia, 3 from Australia, 2 from the Middle East, and 1 from South Africa.A separate collection of 17 global media outlets votes on Esports categories.The Game Awards’ public vote is derived from its website, Twitter direct messages and Discord messages (and through Bilibili in China), as well as a digital ballot that can be summoned by making a Google search for “The Game Awards Vote.”.