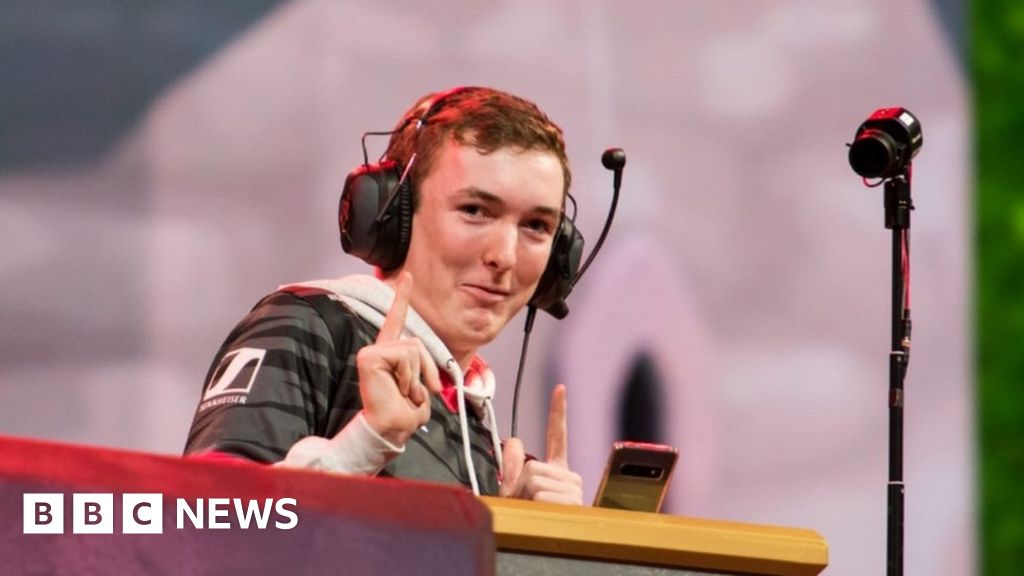 These are external links and will open in a new window Close share panel Image copyright OGN Esports Image caption Liam McCarron is a world champion on the free mobile game ‘Clash Royale’ When his skin condition stopped him going to school for a year, Liam McCarron turned to his mobile phone.
Three years later, he has become a world champion gamer, earning a living from the thing he loves and with big plans to move to Los Angeles.
But the path to success was not an easy one for the 18-year-old from Largs.
Living with a chronic skin condition was debilitating for Liam.Image caption Liam said he would be leaving Largs for LA as soon as he gets his visa
Liam went to Largs Academy, until his condition – chronic urticaria – forced him to stop attending.
“What it would prevent me from doing is basic things like going to school, getting dressed, going to the shops,” he said.
Liam said the painful skin rash meant he needed a tutor to stop from falling behind after taking so much time off school.
“It was tough, for sure,” he said.”But I would make sure to still do basic things.” Image copyright Liam McCarron Image caption Liam won the Mobile E-sports Open in Dortmund
While Liam was off school, he says he began playing a free game called Clash Royale on his phone to stave off the boredom.
“By the time I was back in school, I had been playing it for around a year,” he said.”I had enough experience to build on what I had already learned.”
Just six months ago he started playing the game professionally, after winning a world championship, he now competes in events around the world.
He’s earning as much as his parents do and, once his visa comes in, he’ll be leaving Largs for Los Angeles.Image copyright OGN Esports Image caption Liam has competed across Europe and America
He already spends a lot of his time in America at a house owned by his e-sports team, NRG Esports.
“We’re a group of four players, one coach and one house manager.

So there’s six of us living in that house,” he said.What is e-sports?
Electronic sports, or e-sports, is a form of competition where participants play popular video games.
It’s grown in popularity in recent years, drawing huge crowds and prize money.
Liam won the Mobile E-sports Open in Dortmund in February.

When he was presented with the prize he said he was “so hyped up”.
“As nerdy as it sounds that was probably the best moment of my life.I won $16,000 and competed against the best players in all of their respective countries.I just felt on top of the world in that moment.” Image copyright OGN Esports Image caption E-sports has grown in popularity in recent years
Now Liam’s skin condition is under control, and he’s looking forward to competing again in two weeks in London, where he will defend his world title.
But getting to the top, and staying there, means putting in the hours.
“I practice every day and I try to practice at least six hours a day,” he said.”It’s similar hours to other jobs”
“I’m living the dream at the moment,” he said.Related Topics.