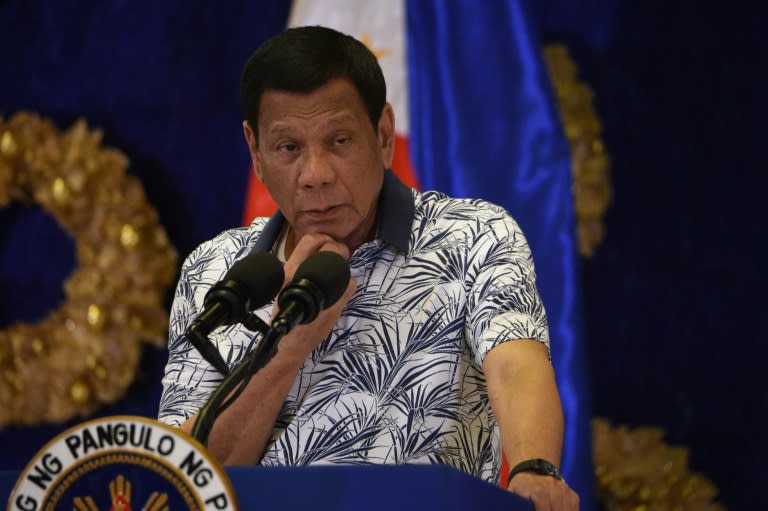 1 / 2 Philippines President Rodrigo Duterte has called for an investigation into preparations for the Southeast Asian Games Philippine President Rodrigo Duterte apologised and pledged a probe into the troubled run-up to Saturday’s opening of the Southeast Asian Games after a rush of logistical problems and last-minute construction.
Complaints over transport, accommodation and food stacked up as thousands of athletes have flooded into Manila for the biggest ever edition of the Games, which are also threatened by an approaching typhoon forecast to hit the northern Philippines early next week.
Though initially contrite, Games organisers eventually pushed back against the criticism and took aim at the media for critical reports on the mishaps.
“I’m really apologising for the country…they (other nations) should know while they are still here that the government is not happy,” Duterte said in an interview that aired Friday, adding he had ordered an investigation.
“You cannot just cast away all those — the discomfort, the sufferings of the athletes, sleeping on the floors, getting hungry,” he added.”To the countries that sent them here, it’s a big deal.”
Earlier, the PHISGOC organising committee chief operating officer Ramon Suzara had promised action regarding what he termed “glitches”.
“We’re doing our best to strengthen all those early glitches, which is very normal in the Games,” he told reporters.
As the build-up woes cast a shadow over the Games, Indonesia clinched the first gold medal of the competition with a historic victory, bringing Singapore’s 54-year stranglehold on the men’s water polo competition to an end.
In matters out of its own hands, the Philippines was also bracing for a typhoon which national forecasters warned was steadily intensifying.
PAGASA said Typhoon Kammuri — which is packing gusts of 170 kilometres (87 miles) per hour and maximum sustained winds of 140 kph — is presently heading right for Games venues in the north of the country and is expected to make landfall on Tuesday.
– Tight security –
This year’s Games in Clark, Manila and Subic, which run through to December 11, are particularly complex with a record 56 sports across dozens of venues that are in some cases hours’ drive apart, even before Manila’s notorious gridlock traffic is factored in.
The vast scale of the multi-sport event has included erecting a massive sports complex in New Clark City, which is at least two hours’ drive north from the capital.
The Philippines’ path towards Saturday’s opening ceremony — an all-singing, all-dancing celebration of the island nation — has been tortuous from the start.
Manila in July 2017 suddenly pulled out of hosting the Games to focus on rebuilding the southern city of Marawi which was heavily damaged during siege by jihadists.
But officials made a U-turn just one month later after securing backing from Duterte.
Security remains a top concern, and police have increased visibility at nightspots near competition venues and suspended Filipinos’ right to carry firearms outside their homes.
Almost 16,000 policemen are deployed in various parts of greater Manila, particularly in the venues and hotels where athletes and other delegations are billeted.
– Home advantage –
The Philippines, which last hosted the biennial games in 2005, is aiming to win the most medals, and history is on their side: seven of the last 11 SEA Games hosts have topped the table, reflecting the tradition of rewriting the sporting programme to suit local strengths.
Malaysia topped the table two years ago with home advantage in Kuala Lumpur, ahead of Thailand and Vietnam, with the Philippines in sixth place.
Around 8,750 athletes and team officials are expected at this year’s edition, and there are some 12,000 volunteers.Organisers hope more than 500 million viewers will tune in on TV.
In an eclectic programme, Olympic sports like swimming and athletics sit side-by-side with regional favourites like martial arts pencak silat, arnis and wushu, and this year athletes will even battle an obstacle race course in Manila.
Medals will be awarded in eSports — a first for a multi-sport competition sanctioned by the International Olympic Committee, after the discipline featured as a demonstration sport at last year’s Asian Games in Jakarta.
Southeast Asia nations rarely shine at the Olympics, but the region’s two gold medallists from Rio 2016 — Singaporean swimmer Joseph Schooling and Vietnamese shooter Hoang Xuan Vinh — are among the athletes competing in the Philippines..