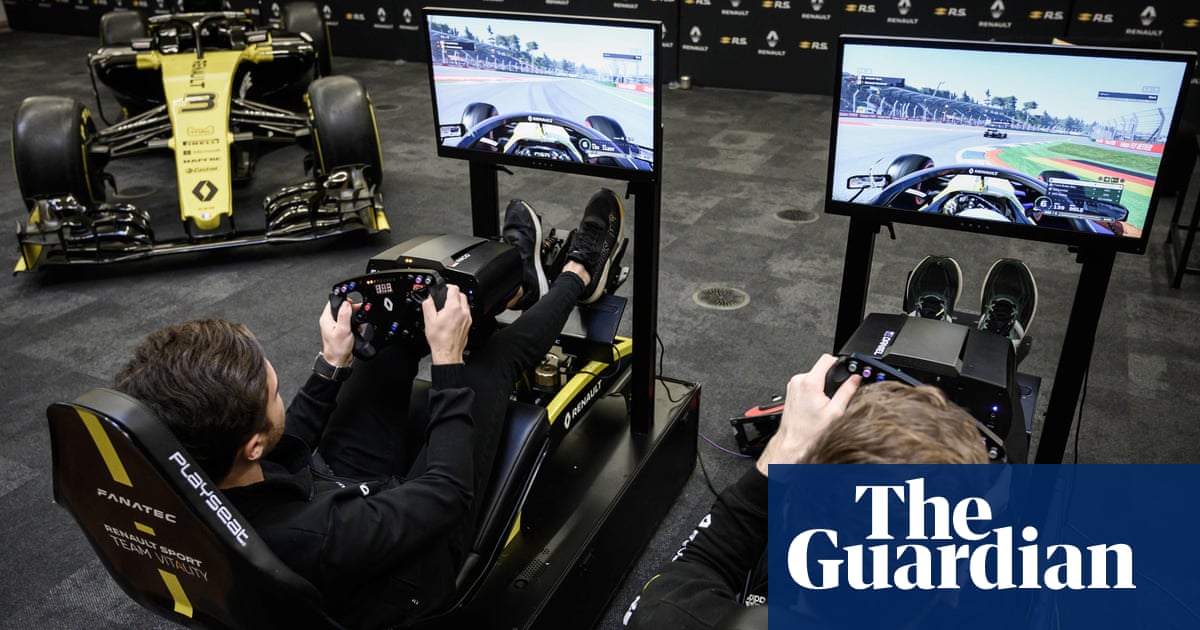 Jarno Opmeer will race at a shopping centre in Fulham before taking to Renault’s F1 simulator to help fine-tune the real thing.T he 2019 Formula One Esports series will come to a climax at a shopping centre in west London on Wednesday.Inside the Vue cinema on Fulham Broadway a customised arena will host racers from 10 different teams, each associated with an official F1 team, as they complete the final three grands prix of a virtual season.Up for grabs is prize money of $500,000 (£385,000).But there is also the chance to shape the future of the sport, both online and off.
Currently third in the standings is Renault Vitality’s Jarno Opmeer – lying 43 points behind the leader, Ferrari’s David Tonizza – and this year’s title might be just out of reach for the 19-year-old Dutchman.A podium finish, however, would still be a welcome improvement for the team who finished bottom of the classification last year.
Lewis Hamilton would be welcome at Ferrari, says Charles Leclerc Read more
Something significant is also happening on Thursday, when Opmeer will become the first esports athlete to test-drive Renault’s F1 simulator.Housed in their base at Enstone in Oxfordshire, the simulator is a critical tool in helping the team to fine-tune their F1 cars, and for Daniel Ricciardo and Nico Hülkenberg to get used to driving them.

Costing by some estimates as much as £20,000 an hour to run, it has not been a facility made available to gamers.
Opmeer, it is true, came to esports through traditional racing.

A member of the Renault Academy, he was encouraged to try out for virtual competition at Enstone this spring.He took part in the qualifying tests and was selected, alongside Germany’s Cedric Thomé.Renault Vitality’s third racer, Simon Weigang, was chosen from the pro draft, a pool filled by winners of online heats from around the world.
“Formula One is one of the few games where the skillset required to perform is the same as that in the actual sport,” says Nicolas Maurer, the CEO of Team Vitality, currently the biggest esports team in France as well as Renault’s partner in F1 Esports.“Of course there are differences, mainly the physical part; you don’t get the lateral force when you’re driving the video game.But Jarno being accepted to the real F1 simulator shows that you can build from video game to the sport and back, so it’s very interesting in that regard.”
No doubt it is also a handy piece of marketing.The truth is that F1 is a minnow in the esports ecosystem.While the game itself has been well reviewed, and the latest version reached No 2 in the UK sales charts, its online audience is small in comparison to heavyweights like League of Legends or Dota 2.“It’s a successful product but still only for a niche audience,” says Maurer.
Pushing the narrative that F1 Esports is as close as it gets to the real thing, and that it is taken seriously by the high-precision world of F1 proper, is one way of setting the game apart from the competition.

If the strategy is successful it might help to sell more copies and, Renault hopes, sway decisions when those gamers (preferably Chinese) come to buy their next car.But there are also real, sporting benefits to be had if F1 and F1 Esports can work in tandem, or perhaps even converge.
Facebook Twitter Pinterest Jarno Opmeer will become the first esports athlete to test-drive Renault’s F1 simulator at their base in Enstone, Oxfordshire.Photograph: John Sibley/Reuters
“[It] is still a new industry and a few years back if you wanted to win at esports all you needed to do was sign the best talent,” says Maurer.“Then we started to add coaches, video and data analysis, that was the next step.Nowadays, if you want to win in the biggest competitions of course you need the best talent, you need the best resources around and you need the best training infrastructure.In that last part, where you use physical and mental conditioning we’re using a lot of what Renault can help us with.

They are using their coaches and their experts to help us train our esports athletes and that’s very interesting and that’s one of the ways we can achieve the performance we’re looking for.That’s a big, big part of the partnership.”
Renault have further plans for working with Opmeer and co, including opening their enormous telemetry suite to analyse data during esports races.In F1, data is taken from hundreds of sensors that record the output of thousands of parts.

In F1 Esports there are 190 data points, and 12 customisable elements that allow for one trillion unique combinations.That’s a difference but not a huge one.With each new version of the game, that gap will close.Some inside Renault believe it will be only a few years before the simulation in the game matches that of their expensive invite-only machine.
Sign up to The Recap, our weekly email of editors’ picks.Soon Renault might be able to test real-life changes through mass virtual practice.It might also create a whole new generation of drivers.McLaren’s Lando Norris, fresh from a rookie season in F1, says not only is the compatibility between the two disciplines real but the limitless practice gaming that makes possible can offer benefits.
“In the future I think you can get people who start in esports and come over,” he said.“I don’t think they can go straight from esports to Formula One, they would have to still do some steps: F3, F2 and so on.

But I think there’s already been some drivers who have proved that having skills on the simulator can translate very well on to the actual racetrack.
“The better the simulators get and everything then the higher the chance of something like that happening.”
Topics esports Renault Formula One Motor sport features.