HomeEsportsThe biggest esports facility in the US has training rooms, an apparel shop and lavish gaming chairs – CNN 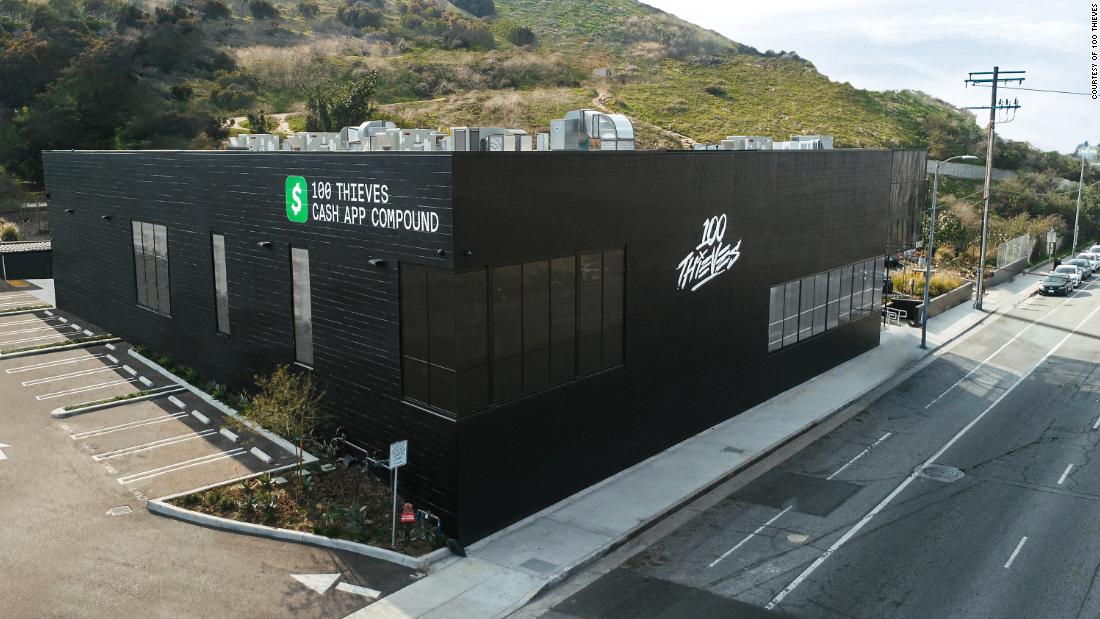 The biggest esports facility in the US has training rooms, an apparel shop and lavish gaming chairs – CNN

New York (CNN Business) Gaming company 100 Thieves has built the biggest esports facility in the United States.Located in Culver City, Los Angeles, the 15,000-square-foot compound may have an arcade and an outdoor basketball hoop, but it also has designated training rooms for playing video games professionally.
Twitter and Square CEO Jack Dorsey was present Wednesday for a ribbon-cutting ceremony.Square’s Cash App is a sponsor of the building.100 Thieves, which was founded in 2017, is best known for selling apparel and having famous “Fortnite” streamers and pro players who compete in games like “League of Legends” and “Counter-Strike: Global Offensive.” The new building has rooms dedicated to gaming including a “Fortnite” room, a “League of Legends” room and a “CS:GO” room.The rooms are decked with gaming chairs that retail for hundreds of dollars each and PC gaming rigs.

The new building, dubbed the “100 Thieves Cash App Compound” after its sponsor, is a warehouse that took about nine months to complete.Neighbors include Nike LA and Beats Electronics.

Robinson said that the apparel shop will be open to the public a few times a year when 100 Thieves drops new clothes for purchase.It’s designed with an open-office layout so that passersby will be able to glimpse content creators’ workstations.Read More “From the stereotypes of having kids in their basements or how people are nerds to now seeing what [competitive gaming] has been building into and what it’s become, it’s an honor to take part in it.When everyone sees the big reveal today, they’ll really have their jaws drop,” Jack “CouRage” Dunlop, a popular Fortnite streamer with 100 Thieves, told CNN Business.The unveiling of the lavish, multimillion-dollar building reveals what the 100 Thieves was spending its large investment on when it declined to participate in the Call of Duty League, an expensive franchise that holds its first match this weekend.Last August, CEO Matt Haag announced that 100 Thieves could not afford to participate in the league and “everyone in our entire company is upset.” “For us to make such a costly investment into Call of Duty would possibly jeopardize everything that this company has been building over the last year and half and two years for me.And it’s just a risk that we can’t take right now,” said Haag.

“To make a financial commitment as large as this just isn’t possible for us right now…I’m just bummed.” The building is designed with an open-office layout so that passersby will be able to glimpse content creators’ workstations.At the time, the announcement drew eyebrows from industry watchers, who noted that Haag is a former professional “Call of Duty” player with strong ties to the franchise and that the company had announced in July it raised an additional $35 million.100 Thieves President and COO John Robinson told CNN Business the company had been working on building the esports facility while pursuing the Call of Duty League, but “ultimately decided that Call of Duty wasn’t the right fit for us.” Teams had to pay $25 million to join the Call of Duty League, ESPN reported last March .Call of Duty League Commissioner Johanna Faries economics but said “it was great how much demand there was for franchising in the first season.” Faries told CNN Business in January, “Everyone who has become part of our ownership group clearly understands the vision of the business.” 100 Thieves has raised $60 million in funding from investors including rapper Drake and co-CEO of Salesforce, Marc Benioff.”It’s nice to have such a significant amount of investment behind us, but we’re definitely not burning through that in a significant way,” said Robinson.”We are not profitable yet,” he said.”We’re getting closer and it’s certainly in the near term future for us.”.