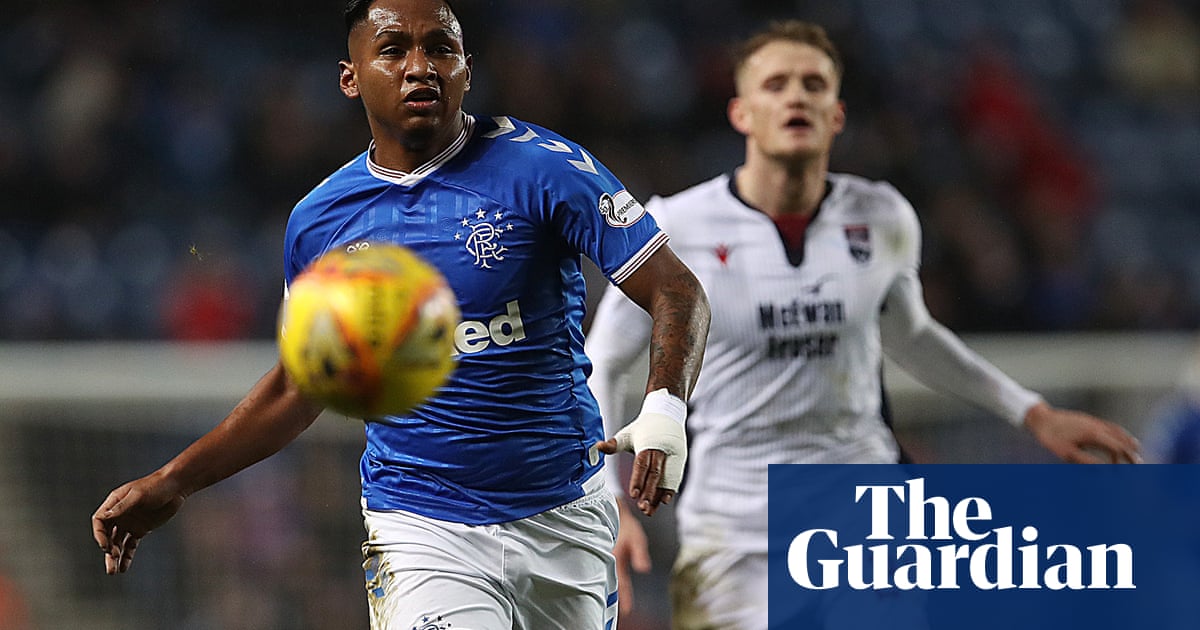 The Fiver | Life in the Glasgow goldfish bowl

In today’s Fiver: Alfredo Morelos, Neymar’s 1996 FA Cup final vibes, a PFA warehouse party and more banging walk-on music.GONE FISHING With the January transfer window shut, a series of FA Cup replays coming down the pipe and half the Premier League stampeding to Dubai for their holidays, the boffins at Sky Sports News woke up this morning in dire need of what the kids these days are calling #content.Luckily for them, Pope’s Newc O’Rangers striker Alfredo Morelos had agreed to a sit-down for an exclusive hour-long interview and managed to get through the interrogation without adding to the seven red cards he’s picked up since moving to Scotland.
‘There is no debate’: Celtic’s Griffiths deserved red card, says Hamilton manager Read more
In a wide-ranging chat that is likely to prompt no end of whataboutery among rival Old Firm fans, Morelos opened up on life in the Glasgow goldfish bowl as a hot-headed 23-year-old striker about town.“Living in Glasgow is great but it is also complicated,” he said.“The passion for football is incredible.

Half the city loves me but half the city probably doesn’t like me so much,” he added, the word “probably” audibly groaning under the strain of all the heavy lifting it was being forced to do so early on a Monday morning.
Despite talking at length about his frustrations at the everyday vicissitudes of being racially abused, hearing his mother bad-mouthed and being pelted with coins and drinks as he tries to go about his business of scoring goals for the O’Rangers, Morelos seems content with his lot in life and is enjoying life at Ibrox, referring to his teammates and coaching staff as “a second family”.The delinquent child with a disciplinary record has done little to iron out the giant crease in his manager $tevie Mbe’s perma-furrowed brow, although he concedes he has tried to change his errant ways and insists some of the half-century of red and yellow cards shown to him by assorted referees were brandished “sometimes unjustly”.
Away from the cameras, Morelos made weekend headlines when it emerged that early last week he had found a stranger up to no good under his parked car and chased him down the street.Subsequent internet babble that somebody might have been tampering with the brakes of his Lamborghini prompted a local private detective to present himself to police and admit he had been trying to place an electronic tracker on the chassis after being hired by Yesenia, the footballer’s wife.

While The Fiver is not going to speculate on what prompted Mrs Morelos to embark on such a wheeze, we’re prepared to guess his one-on-one with Sky was not the only intensive grilling her husband endured in recent days.
Quote: OF THE DAY “It’s my choice not to participate in the party.It’s a choice as a coach; it’s not against Neymar personally” – Thomas Tuchel defends his decision to swerve the Brazilian’s white suits-themed birthday bash because, presumably, he didn’t want it to become a thing .

Isn’t that right, Yaya?
Facebook Twitter Pinterest 1996 FA Cup final vibes? Photograph: Zakaria Abdelkafi/AFP via Getty Images FIVER LETTERS
“‘Welcome To The Pleasuredome’ may be the Bury FC walk-on music (Friday’s letters) that Adrian Foster remembers but when I mentioned that to my friend Andrew Dietz, another who has been left bereft by the scandalous events at Gigg Lane he pointed me to this classic ” – David Carr.
“Jon Millard’s letter (Friday’s Fiver) about Notts County’s self-penned-belter was so good I decided to click on the link provided within.The song definitely benefits from some Jonny Briggs-esque heavy lifting from the trombonist, but it brought to mind the song that Scarborough FC did when we were promoted in 1987.

Ours has more of a ‘bontempi organ’ feel, and has the benefit of including Neil Warnock, our manager and part-time chiropodist, as one of the backing singers .Enjoy!” – Nick Kinsella.
“For what seemed like an eternity, the much-missed Inverness Thistle played a Deacon Blue album during every half-time.One day, they forgot to turn it off – the second half kicked off nonetheless and we were treated to several minutes of Highland League footballers running around to the accompaniment of Real Gone Kid, etc.To the hilarity of all (except perhaps the players)“ – Toby Blake.
“John Kyle (Friday’s letters) calls himself a Cambridge United zealot, then admits he doesn’t know why I’ve Got a Lovely Bunch of Coconuts is played after every home win (about twice a season, then).

He, despite possibly being a relative of ex-U’s wing half John ‘Jock’ Kyle, should hang his head.The explanation can be found here .The Billy Cotton Band with vocalist Alan Breeze, 1950, since you ask” – Patrick Morgan.
“If memory serves me right, Fulham used to come out in the second half to A Town Called Hypocrisy by Lostprophets in the longer Premier League era.In good taste, this obviously stopped quite sharpish in 2012 but always struck me for how niche the choice was and how unlucky they got with it.That was also the year Dempsey and Dembélé left but I don’t think that was in protest at the musical association” – Phil Jones.
Send your letters to the.boss@theguardian.com .And you can always tweet The Fiver via @guardian_sport .Today’s winner of our prizeless letter o’the day is … Toby Blake.
RECOMMENDED LISTENING Football Weekly is here .Tickets are also on sale for the next live show in London .
NEWS, BITS AND BOBS Two people have been arrested after allegedly making homophobic gestures towards Brighton fans during West Ham’s 3-3 draw at the London Stadium.
Dele Alli has forgiven Raheem Sterling for the tackle which left him with ankle-knack during Spurs’ 2-0 defeat of Manchester City.

“He would never intentionally try to [knack] someone,” cheered Alli.
Bradford boss Gary Bowyer is now former Bradford boss Gary Bowyer.
And who took the brunt for City’s defeat? None other than former Premier League chief suit Richard Scudamore.“Two seasons ago there was the owner [sic] of the Premier League who said that could not happen again, it’s not good for the Premier League for City to win the title in that way, with 100 points,” roared Pep Guardiola.
And Manchester’s Victoria Warehouse will be staging the end-of-season PFA rave in which the whistle posse will be making some noise for Jordan Henderson, the current favourite to win the best player gong.Bangin’!
STILL WANT MORE? Matt Le Tissier gets his chat on with Barry Glendenning on VAR , Liverpool and staying till the bitter end of that 9-0 drubbing.
Facebook Twitter Pinterest Your man, right here.Photograph: Roger Arbon/The Guardian
Olivier Giroud and Hugo Lloris are reunited in a Premier League talking points with a French flavour .
Andy Brassell on Werder’s sinking feeling .
Sid Lowe on the new masters of defence in Madrid .
Rachel Brown-Finnis reviews the latest round of WSL matches .
Forget fancy formations and statistics, says Jonathan Liew , Tottenham’s win over Manchester City proves football remains riotously random.
Hipsters rejoice, Francisco Navas has compiled a list of the best South American exports to Europe this January.
And Liverpool will be busy this summer if you believe this morning’s Rumour Mill .
Oh, and if it’s your thing … you can follow Big Website on Big Social FaceSpace .

And INSTACHAT, TOO !
WALES.GOLF.ESPORTS.IN THAT ORDER Topics Football The Fiver features.