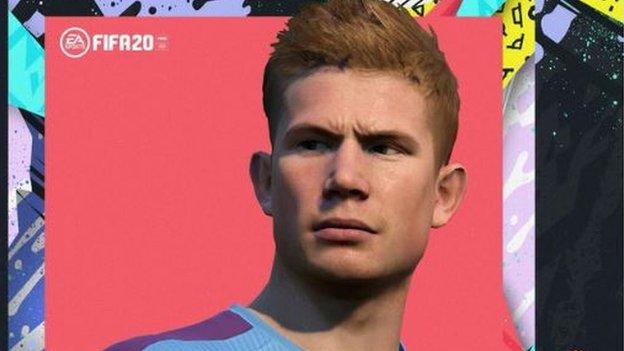 Read more about sharing.Pessoa helped Man City reach the the quarter-finals at last year’s eClub World Cup in London If you can’t be a professional footballer, then being a professional virtual footballer is a pretty good second best.
Ryan Pessoa is one half of Manchester City’s eSports team, which this weekend will attempt to win Fifa’s eClub World Cup in Milan.
“I never thought I’d be doing this as a job, it’s a dream come true,” says 21-year-old Pessoa, who likens his playing style to City’s Belgian midfielder Kevin de Bruyne.
“I back myself and think we can win but with Fifa you never know.Things don’t always go your way.”
The competition started on Friday and features 24 teams from all over the world battling it out to be crowned the winner on Sunday.
Only four other professional football teams have qualified for the tournament – Roma, Lyon, Basel and Austria Vienna.
The rest are specialist eSports teams and include Ellevens, formed by Real Madrid’s Gareth Bale.Pessoa’s team he used to qualify – Alisson, Pereira, Van Dijk, Luiz, Mendy, Gullit, Traore, Sissoko, Eusebio, Mbappe, Ronaldo.Managed by Marco Silva.
It is City’s third appearance in the competition and it is also the third year in a row that Pessoa has qualified.
Pessoa has played Fifa since he was nine years old but admits he became a professional by accident.
“I just started playing the Fifa weekend league against my friends.

I had to play 40 games from Friday to Sunday and did so well that I qualified for an event in Munich,” he says.

“I then ended up winning that event and that was the start.”
Pessoa graduated from university last summer so this is the first time that he has been able to concentrate solely on the competition.
“I’ve always had coursework and exams to worry about, but this time I’ve been able to fully focus.”
But his training does not simply consist of playing Fifa every day.
“I practise five to seven hours per day, but it isn’t just playing the game.I’ll watch gameplay – my own from previous tournaments and my opponents – to see if there is anything I can implement into my own game.
“I also play some of the other pros, as they’ll set up tournaments.

They’ll put out shout-outs on Twitter.” Preparation is everything Pessoa trained in Austria, at the Red Bull Athlete Performance Centre, prior to travelling to Milan for the eClub World Cup
In a sign of how seriously the competitors are approaching the eClub World Cup, Pessoa has prepared in a manner not unlike that of football’s real-life superstars.
“Last week I was in Austria at the Red Bull Athlete Performance Centre, which was fantastic.I spoke to a nutritionist and I had a sleep assessment,” he explains.
“I now realise I need a routine, rather than sleeping at random times and stick to a good diet, so that my brain can function in the best way possible.”
And with $40,000 (about £30,900) set to be awarded to the winning team, Pessoa is hoping his new regime will give him the edge.
“It would be amazing to win and be called the best Xbox Fifa player in the world.”
But what Pessoa really wants is to take on a certain England player.
“I’d love to play Raheem Sterling.That would be cool.”
So if you’re reading this, Raheem, slide into Ryan’s DMs.Donovan Hunt (Tekkz) and Nicolas Villalba (nicolas99fc) of KiNG eSports won last year’s Fifa eClub World Cup Fifa eClub World Cup Q&A with eSports commentators Brandon Smith and Richard Buckley
How big a competition is the eWorld Cup?
It is a huge tournament, similar to the real football Club World Cup.

This year there have been even more clubs involved and the competition has been stronger than ever before.Gareth Bale has even formed his own team.

As well as the prize money, there are huge points at stake, which will help players qualify for other big tournaments.
Who are the favourites?
Fnatic.They have the poster boy and MVP of the Fifa 19 season Tekkz on their team.With his team-mate Tom Lease ranked eighth in the world, they are the odds-on favourite to lift the trophy.
What are Man City’s strengths and weaknesses?
Both Ryan and Shellz are great friends which will be crucial with the 2v2 matches.But, we haven’t seen too much of these guys in major events so far this year.
How would you describe Pessoa’s gameplay?
Ryan plays very aggressive in the final third – he has a great eye for a killer pass and is also deadly in front of goal.

He can defend with men grinding out results if necessary.He is one of the world’s best.
How big can Fifa tournaments become? Do you think matches will be selling out football stadiums in years to come?
Fifa esports will continue to get bigger and bigger.There were 3,000 fans at the grand finals last year and $250,000 for this year’s winner.

The eWorld Cup is the bridge between football clubs and eSports organisations and is one of the highlights of the year.Share this page.