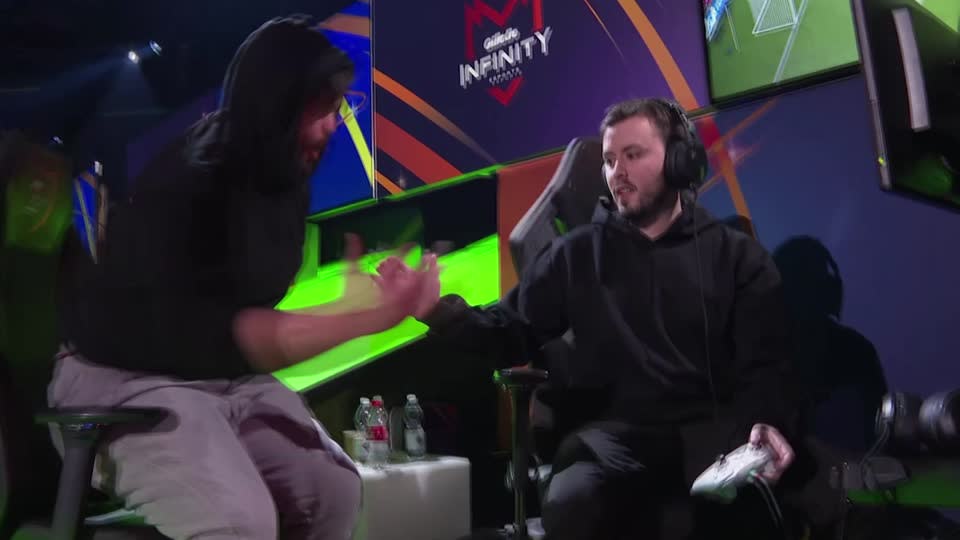 AS ROMA ESPORTS (GROUP C) PLAYER
17.(SOUNDBITE)(English) FNATIC PLAYER DONOVAN ‘TEKKZ’ HUNT SAYING:
“My first day was…it was different, I started off bad, I lost my first game, Tom (teammate) won his first game and then 2v2 we played bad but we won, and then I played again but I won.Tom is just killing everyone, Tom is the best PlayStation player in the world, I did an interview earlier and I said Damien is, Tom is, Tom is the best PlayStation player in the world, and 2v2 we just kept winning and, yeah, it’s been a good day other than the one loss we had so I’m feeling good but in eNations, where me and Tom played for England, we did the exact same thing but then just lost in a random knockout game so hopefully that doesn’t happen this time, but I think we’re through the groups and we’ll see what happens Saturday and Sunday.”
18.IN GAME FOOTAGE OF GOALS OF THE DAY – TEAM QLASH SCORING GOAL IN EXTRA TIME IN MATCH AGAINST NASR AND REPLAY
19.

TOM FROM FNATIC SCORING PENALTY KICK GOAL IN MATCH AGAINST TEAM QLASH AND REPLAY
STORY: The finals of the FIFA eClub World Cup 2020 got underway Friday (February 7) in Italy with the opening group stage matches as 24 teams from around the world battle for e-sports club soccer supremacy.
After worldwide online qualifying that saw 190 teams compete, the 24 finalists gathered in Milan were divided in four groups of six teams and spent the first day of the three day competition playing 1v1 and 2v2 matches.
Playing the Electronic Arts FIFA 20 title on the PlayStation console, the top finishers in each group will advance to the knockout stage with Sunday’s winning team taking home $100,000 usd.
(Production: David Grip).