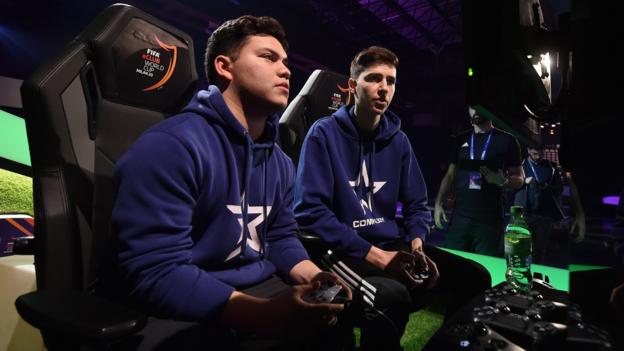 Complexity Gaming beat Gareth Bale’s Ellevens in Milan to win the Fifa eClub World Cup for the first time.
Complexity, co-owned by Dallas Cowboy owner Jerry Jones, beat Ellevens on penalties after the game finished 0-0.
Americans Joksan Redona Tello, 21, and Max Popov, 17, won $40,000 (£31,000) and 20 Global Series ranking points.
“Winning the Fifa eClub World Cup title is huge for us and a major step forward ahead of the Fifa eWorld Cup this summer,” said Tello.
Manchester City esports finished fifth in their group, and so did not qualify for the knockout stages.Bale’s esports team
Real Madrid and Wales forward Bale announced his arrival in esports on social media on 3 February.
Ellevens is co-owned with 38 Entertainment Group, founded by entrepreneur Jonathan Kark and former footballer Larry Cohen.
As well as Fifa players, Bale is also inviting other gamers from around the world to participate in a talent hunt to gain a professional contract.Share this page.