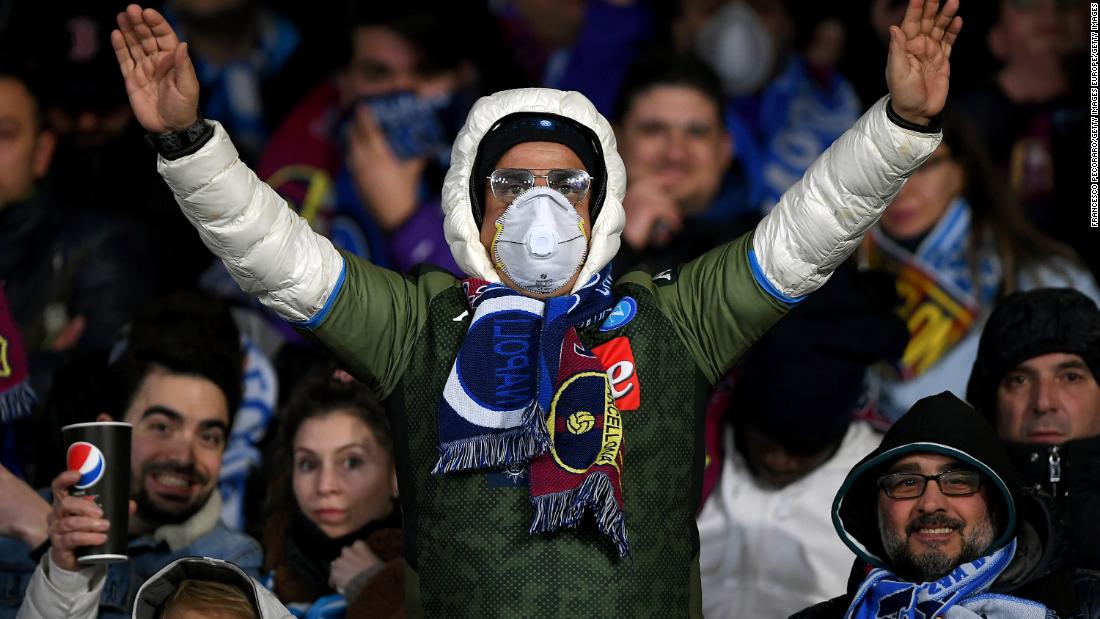 (CNN) As countries across the world scramble to get to grips with the coronavirus outbreak , sporting events across the board have been compromised.
There are now more than 80,000 confirmed cases of the virus around the world and the death toll is over 2,700 — the majority of which are from mainland China.With the World Health Organization saying it’s time to prepare for a potential pandemic, it seems the list of sports affected by the virus will continue to grow.Rugby’s Six Nations tie between Ireland and Italy in Dublin on March 7 is the latest event to be postponed as Italian authorities struggle to contain the biggest outbreak of the virus in Europe.There are also fears Tokyo 2020 may be impacted but organizers insist preparations are going ahead as planned.Read More Here is a list of the major sporting events so far hit by the coronavirus.

READ: Tokyo 2020 preparations going ahead ‘as planned’ despite coronavirus threat A Napoli supporter wears a mask during the Champions League tie against Barcelona.

Football The start of the Chinese Super League has been postponed.China’s women’s national football team was held in quarantine after Olympic qualifying matches were moved from China to Australia.

South Korea’s professional soccer league has postponed the start of its new season.Four Serie A matches postponed in March due to a spike in cases in northern Italy.Inter Milan’s Europa League game against Ludogorets will be played behind closed doors.Japan’s J.League postponed seven Levian Cup matches in February and all domestic games through early March.Athletics The 2020 World Athletics Indoor Championships in Nanjing has been postponed until next year.The Tokyo Marathon in March has been restricted to elite athletes only.

Boxing The Olympic boxing qualifiers for Asia and Oceania teams were moved from Wuhan to Jordan .Winter Sports The first Winter X-Games event to be held in China has been postponed.The downhill and super-G men’s alpine skiing World Cup races were canceled in February.The World Short Track Speed Skating Championships in South Korea have been postponed.

MUST WATCH
Wuhan coronavirus affecting sporting events 03:53 Rugby Hong Kong and Singapore Sevens tournaments have been moved from April to October.The Six Nations tie between Ireland and Italy has been postponed after advice from Government.Table tennis The world championship to be held in Busan, South Korea, has been pushed from March to June.Tennis China had to forfeit a Davis Cup tie against Romania because its team was unable to travel.