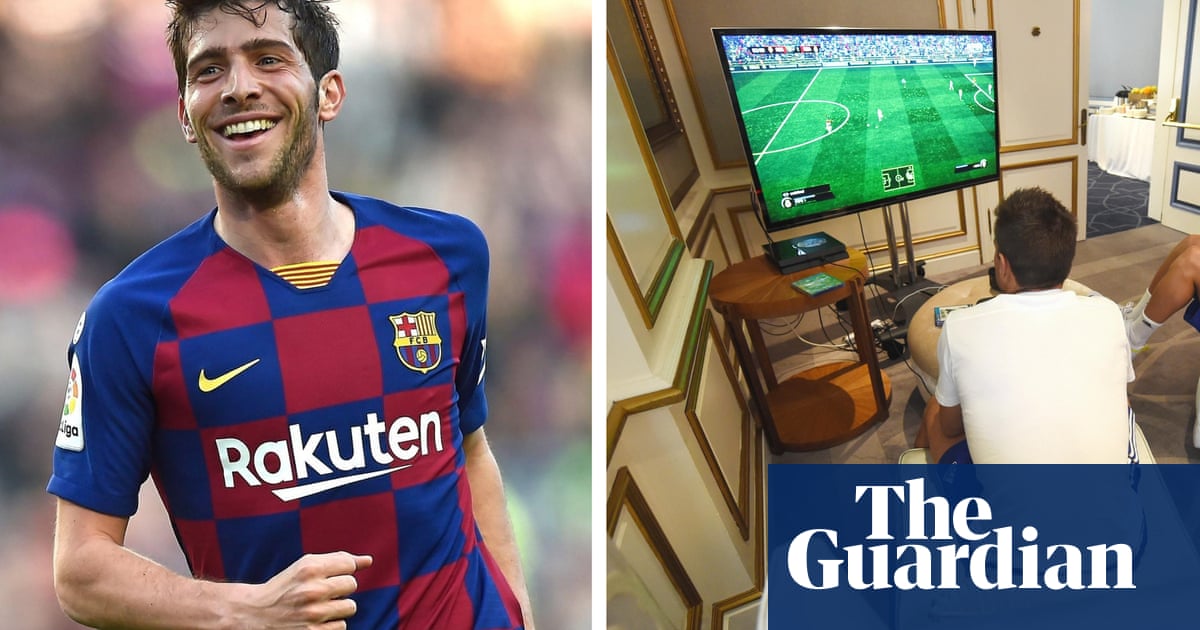 La Liga hopes to return by the middle of May but in the meantime it is staging a computer game competition for top-flight clubs.T he president of La Liga , Javier Tebas, is convinced the competition can be completed by 30 June.If not, there may be a solution to the thorny question of who should take the title, who gets the European places and which teams are relegated.Or at least a way of filling the time until football comes back, if it does.
La Liga hopes to return by the middle of May.In the meantime, a competition is about to begin between Spain’s 20 first division teams – on games consoles.
On Friday, Saturday and Sunday one player from each club will compete for an improvised national Fifa championship on PlayStation, with Marco Asensio, Sergi Roberto and Adnan Januzaj among those representing their clubs .The competition will be live online and some of Spain’s best-known broadcasters will provide commentary, with all proceeds going to help medical staff.

“It’s the chance to do something nice with the coronavirus issue [going on],” the competition’s organiser, Ibai Llanos, told El País.
‘People need them more than we do’: Valladolid reject coronavirus test kits Read more
La Liga has sought to adopt the competition, lending it an official status, and players from beyond Spain are keen to be involved in similar projects – including the Chelsea captain, César Azpilicueta.
It is the kind of idea dreamed up by an eight-year-old as a way of deciding the final league positions.But it was born with Real Betis’s Borja Iglesias and Sevilla’s Sergio Reguilón who played the Seville derby online from their homes on Sunday night after La Liga postponed all games for at least two weeks.The game was broadcast by Llanos, Spain’s most famous esports commentator, on his Twitch account; 62,000 people watched.
“When you find out 62,000 people are watching, you get nervous; there’s a lot of pressure, but it was cool,” Iglesias said.He also admitted to taking it very seriously, something that is true of most footballers, seeking something to fill the void during these days of lockdown.“We live to compete,” he said.“I competed as if it was a real match.” Betis won the derby 6-5 against Reguilón’s Sevilla and the virtual Iglesias scored a hat-trick for the real one.
Ibai (@IbaiLlanos) Os molaría un torneo de FIFA entre los 20 equipos de primera?
Buscamos un futbolista de cada club, como el Sevilla-Betis de ayer pero con todos los equipos
Podría llamar también a narradores de fútbol para que lo comenten.

Y todo lo generado en el streaming lo donamos.
March 16, 2020 The success of the derby prompted Llanos to pitch the idea of expanding the e-derby into a league-wide competition on Twitter and the response was rapid, with more than half the places filled within an hour.“I just tweeted without really thinking it through; there was no agreement in place with anyone, no business or clubs on board,” Llanos said.“I was overwhelmed by the reception.”
The Fiver: sign up and get our daily football email.At some clubs, there was more than one candidate.

Thibaut Courtois, Asensio and Dani Carvajal had to compete to see who represents Real Madrid.Llanos also invited football commentators to participate.Manolo Lama from Cadena Copa, Antoni Damiel from Cadena Ser and Miguel Ángel Román from Movistar, some of the most familiar voices in football in Spain, will be among the voices for the competition.
The draw was made on Friday .The top 12 in La Liga will go straight into the last 16, with the other eight clubs competing for the remaining four places.

From there, it will be a straight knockout.“It’s going to be EPIC,” Llanos tweeted.
Topics La Liga European club football Coronavirus outbreak Real Betis Sevilla features.