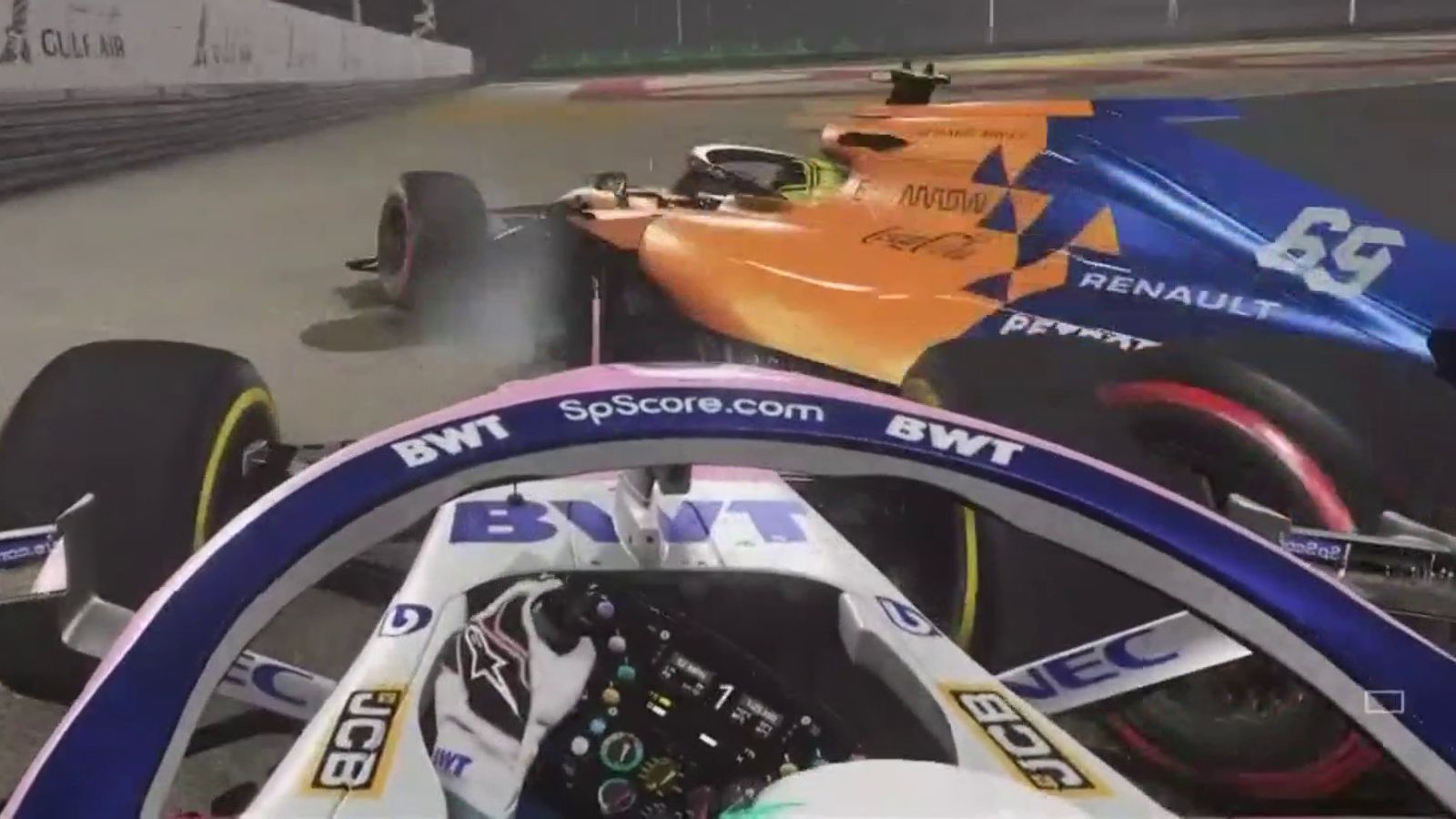 It started with Sky F1’s Johnny Herbert leaping from 16th to 1st by cutting the opening corner, it finished with McLaren ace Lando Norris being taken out by a popular sim-racing streamer.
Formula 1’s inaugural virtual Grand Prix, ‘in’ Bahrain, provided laughs and chaos throughout as a grid lined with stars – from Liam Payne to Ian Poulter – filled the live racing void by battling it out in an Esports spectacular.
Here were the best bits…Lando the star, even when not on-track, before big crash
In terms of current F1 stars, Norris was the leading light of this grid, with the young Englishman one of two drivers from the 2020 grid competing – along with Williams racer Nicholas Latifi.The only issue was, Lando wasn’t there.Zhou wins as F1’s virtual world delivers racing filip
Norris, plagued by technical difficulties as he tried to juggle the event and his own Twitch stream, couldn’t connect for qualifying, and couldn’t start the race.Not something he’s used to in F1.
The 20-year-old comically filled his time as he waited for his game to restart.He prepped for the race by calling Max Verstappen and Carlos Sainz, along with his McLaren crew, asking for advice, while Norris then cheered on a ‘LandoBot’ which was competing in his absence.Lando using his ‘phone a friend’ lifeline to ring @Max33Verstappen — #L4NDO (@TeamL4NDO) March 22, 2020
When he finally joined the action, Norris was on a mission.

He moved up to fourth place after a cracking battle with Jimmy Broadbent, a sim-racing and YouTube star – and was then involved in the highlight collision of the race.
Norris defended the inside into the final corner but Broadbent, determined in his pursuit as he made a move around the outside, nudged into the McLaren and pushed him off the track.Fourth place was his, with Norris dropped to fifth.
“JIMMY! JIMMY!” screamed Norris – thankfully unhurt from the crash.Johnny provides two memorable moments
Before becoming a much-loved member of the Sky Sports F1 team, Johnny Herbert made his name as a fearless and mega-fast F1 driver, with seven podiums and three race wins over a decade-long career.With that pedigree, it’s unsurprising that Johnny impressed in his sim-racing debut with little to no practice.
But that’s not to say his evening wasn’t filled with its hilarious hiccups! 0:32 Our very own Johnny Herbert crashes into the wall destroying his front wing in the process.Our very own Johnny Herbert crashes into the wall destroying his front wing in the process.
It started in qualifying as Johnny, on a quick opening lap, smashed through a trackside advertising barrier after losing control of his Alfa Romeo in the final sector.His virtual pit crew fixed his virtual car damage soon after, and he recovered on his next attempt to grab 16th on the grid.0:47 Nico Hulkenberg crashes into a wall on the opening lap of the Virtual Bahrain GP.

Nico Hulkenberg crashes into a wall on the opening lap of the Virtual Bahrain GP.
Eager to make amends, Herbert made a storming start to the race, unbelievably securing the lead within a matter of seconds.One problem: He had completely disregarded the first corner to do so.
After a hefty penalty, he would finish the race just outside of the top-10.

He said he was “surprised” by his qualifying performance as he lined up fifth on the grid, before being involved in a huge crash at the start in his Racing Point.Also See:.