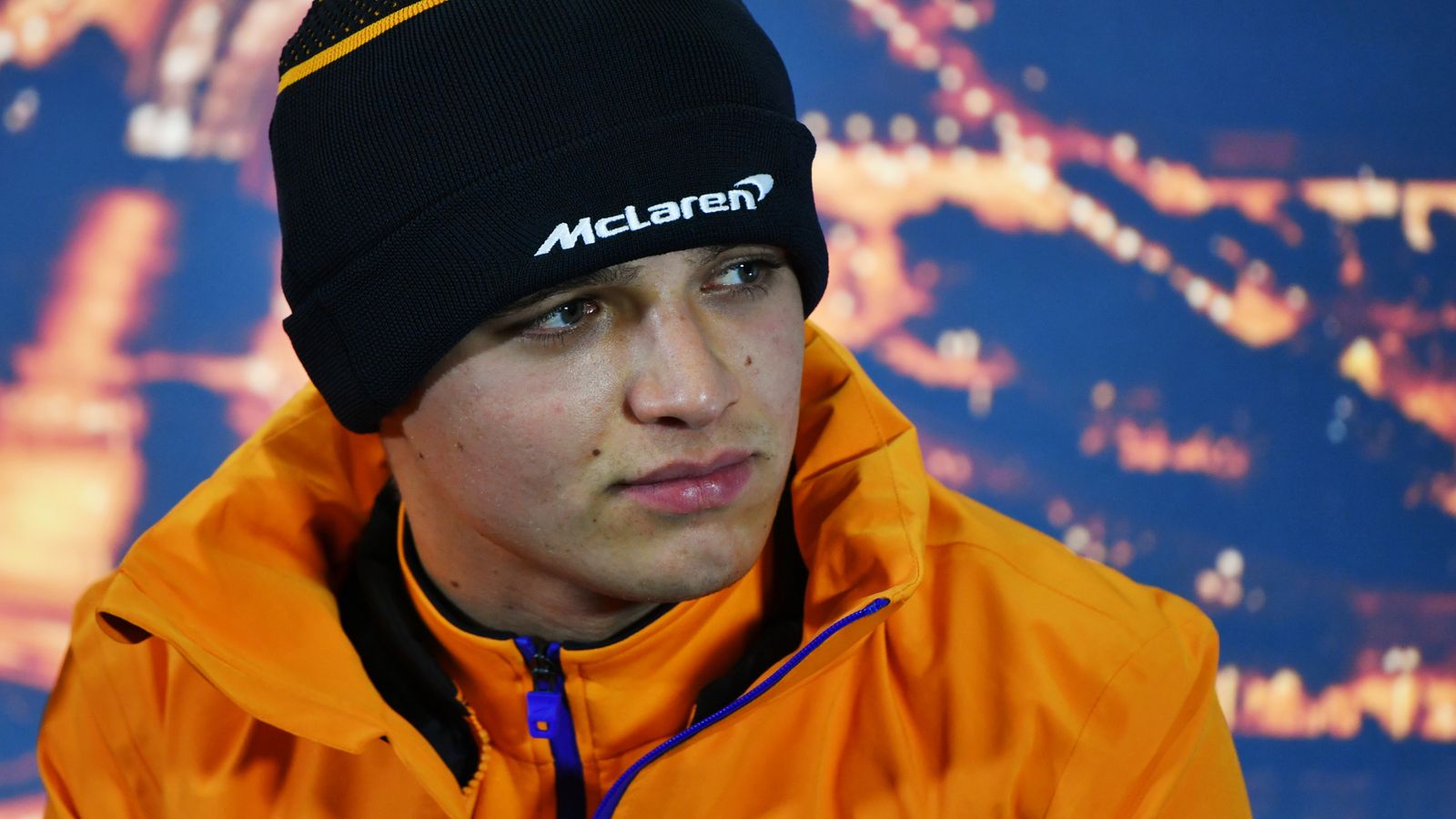 McLaren, and Verstappen” itemprop=”headline”> Lando Norris talks McLaren, Esports and Verstappen on Sky F1 Vodcast Episode 3: McLaren driver joined the Vodcast to chat with Sky F1’s Rosberg, Davidson and Lazenby By James Galloway Last Updated: 04/04/20 7:25am Vodcast Lando Norris – sporting a fresh short trim – joins Nico Rosberg, Anthony Davidson and Simon Lazenby on the latest Sky F1 Vodcast McLaren’s Lando Norris gave the verdict on his new sheared look during his appearance on the latest Sky F1 Vodcast – and explained why it is right he is taking a pay cut amid the coronavirus crisis.
In the third instalment of the Vodcast, Norris chatted to Sky Sports’ Nico Rosberg, Anthony Davidson and host Simon Lazenby the day after the night before when he shaved his hair live on his Twitch channel.At Home with Sky F1: Watch all episodes so far Not quite #BaldoNorris explained
Having promised to take the clippers to his hair if fans helped raise $10,000 as part of the online platform’s Stream Aid’s COVID-19 Solidarity Respond Fund, Norris stayed true to his word live on his channel on Thursday night – although stopped a few grades short of going for the completely sheared look
“I don’t know about the haircut, to be honest!” Norris admitted to the Sky F1 Vodcast panel.”I don’t think I look great in it, but it was for a good cause at the end of the day.
“I’m probably going to have to stay in my house for quite a while longer so by the time we get to race one, I’ll probably look exactly the same as I did when I attended Australia!” A fantastic line-up for our third episode of the Sky F1 Vodcast! ğŸ�™ï¸�Newly bald @LandoNorris , @Nico_Rosberg and @AntDavidson join @Simon__Lazenby .If this episode gets 250,000 views, Simon will shave his head! âœ‚ï¸� — Sky Sports F1 (@SkySportsF1) April 3, 2020
On the commendable reasons behind the head shave, Norris said: “It was for the fight against COVID-19.It was for Stream Aid which was hosted by Twitch and I think we managed to raise in the end, not myself, something like $2.7m which was pretty cool – and I played a small part in that, which I was very happy to do.
“My 10k goal was the amount to shave my hair off.I didn’t say whether I would be bald or how much I would shave off, I just said I’d shave some of my hair off.
“Everyone obviously assumed I was going to be completely bald by the end of it, maybe I’ll get to that point.I need to stay with this for a while and get used to it and maybe for another stream idea, I’ll end up being bald.

It was the fight against COVID-19 and to help the people who are struggling more.” Why Lando has taken a pay cut
As part of measures to cut costs and protect jobs during the coronavirus crisis, the McLaren Group have put some staff on a two-month furlough – while the remaining workers have taken temporary pay cuts.
Drivers Norris and Carlos Sainz each voluntarily agreed to reduce their own wages as part of that latter measure and the 20-year-old Briton said: “It’s the best thing for all of us, including myself, at the moment to make sure that everyone can continue their jobs when we get back to being able to go to work.
“It’s a sad time for drivers, staff and everyone in Formula 1.Due to the impact of COVID19, the McLaren Group has adopted difficult temporary measures regarding its staff to hopefully protect jobs in the long term.I fully understand these tough decisions and I have obviously decided to take a pay cut.We are all in this together.pic.twitter.com/O2woN7kYKt — Carlos Sainz (@Carlossainz55) April 2, 2020
“So many girls and guys who work so hard over so many years and over the winter to build a car and everything and you get to the point when everything is just put on hold.
“I hope not, but we might not be able to do much this year – maybe we won’t even do some races.
“To see everyone sitting at home when we love to be working on the car, finding lap time and trying to win races is a sad time for everyone.But it’s the best thing we can do for our team to make sure that when we can get back to work everyone can get back to work and everything can return and go back to normally, basically, instead of things having to change.” Norris’ message for Verstappen on Virtual GPs
Although the racing season is on an indefinite hold, Norris has kept himself occupied at home with the youngster competing in sim racing across a multitude of races and hosting hugely-popular live events on Twitch.
Red Bull rival and friend Max Verstappen regularly competes against him in iRacing but the Dutchman has yet to follow into the Virtual GP world on the official F1 2019 game, with the second event taking place on Sunday night live on Sky Sports.
Asked if the Dutchman was running scared, Norris joked: “Absolutely!”
He then added: “No, I’ve got no clue.

The F1 game is really good fun.You’re racing an F1 car, it still feels quick, the cornering speeds and everything.

You get the feeling of driving a Formula 1 car in some aspects, and you get to drive on a lot of the F1 tracks, which is good.
“But you have some of the other programmes like iRacing, which is the one we compete against each other on, and there’s just more variety.You can race GT cars, you can do single seaters, you can do a lot more different stuff.That’s what I guess he [Verstappen] enjoys a bit more, the changing from one car to the other and the variety, rather than always driving on the F1 stuff.
“So I don’t think he’s driven on it [F1 2019] much anyway and he always says that when he joins something he wants to join and win.So I don’t know if he doesn’t want to join because he knows he’s not going to win, or the fact that he just doesn’t spend much time on it and therefore he’s not very confident.