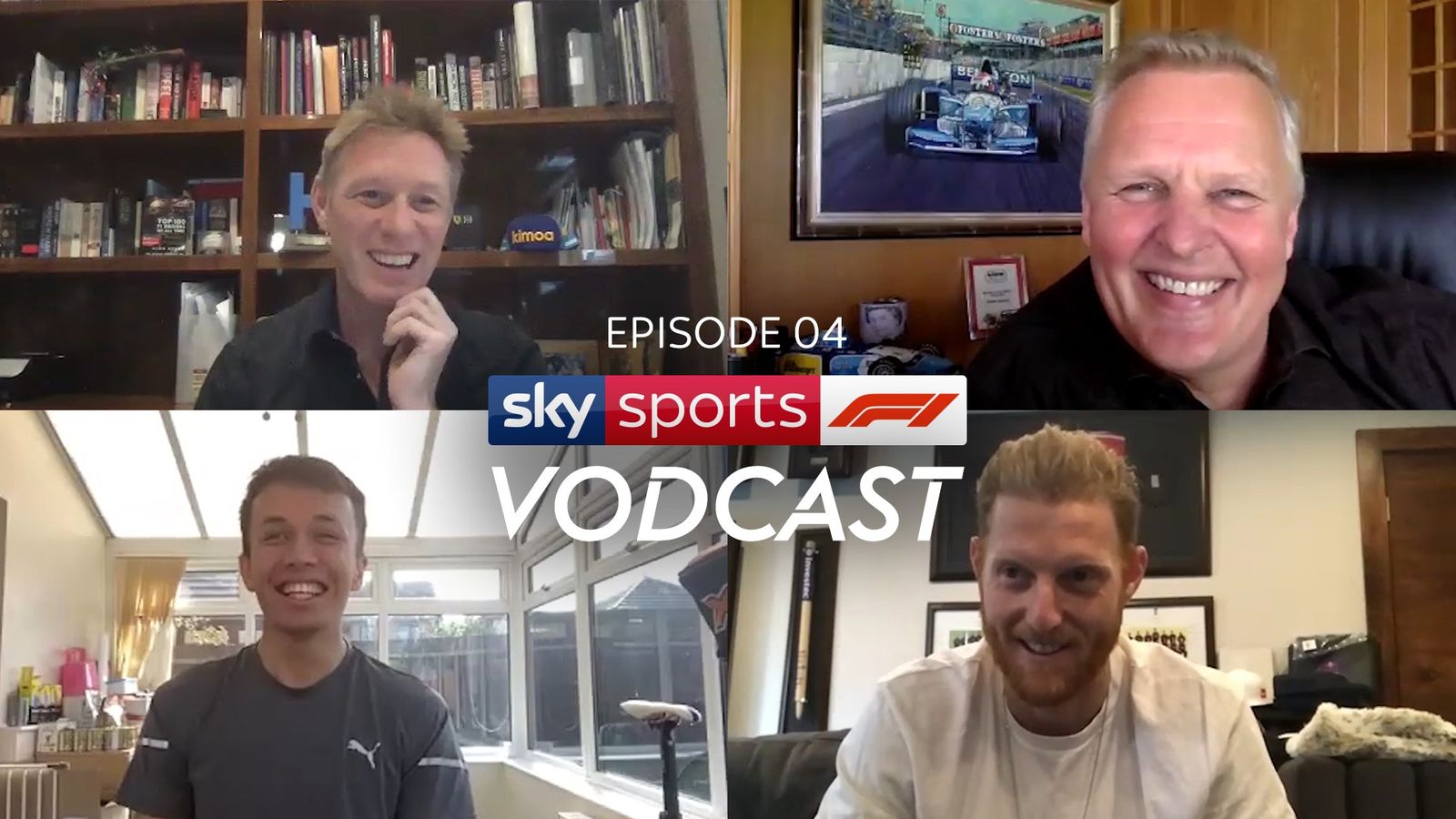 At Home with Sky F1: Watch all episodes so far ‘Massively out of my comfort zone’
Stokes was the only driver taking part on Sunday not to be, or have been, a professional racer – so it was no surprise that he struggled somewhat in his debut race.Although he certainly wasn’t embarrassed.
Stokes wasn’t too far off the pace in qualifying, and then moved up to 12th on the opening lap before spinning and eventually finishing last, after some battles with Sky F1’s very own Johnny Herbert.
“The experience as a whole was great,” Stokes, who only recently started practicing with a sim steering wheel, exclusively told Sky Sports F1.”I’m not going to lie, after the race I was in a bit of a huff because I came dead last!
“I obviously had to take into consideration who I was racing against, but the sportsman in me – I thought it would be great not to finish last.I was obviously gutted, but these guys know what they’re doing.It was great fun.” 0:23 Cricketer Ben Stokes swapped his bat for an F1 simulator, going head to head with stars of the motorsport world – but took an early spin in the Virtual GP.

“It was quite hard to let Ben get up to speed.He was with a controller to start off with and then he moved to a proper steering wheel and pedals.
“In the game itself there are so many little tricks, and I was trying to tell Ben to basically understand that.

But even me, I didn’t really understand it.We were kind of learning together!
“I was asking the Red Bull Esports guys what to do and even two minutes before the race I was asking Charles [Leclerc] what lap he was going to pit because I had no idea what to do.But we’ll be more prepared next time! It was good fun.”
And Albon doesn’t doubt that the F1 drivers will continue to play.
“During this conversation Charles has text the group chat to say we’re all going to get on it tonight as well,” he revealed.
Stokes and Albon also spoke about more job swaps, with the prospect of Stokes driving an F1 car for real touted, while the cricketer welcomed Albon to the nets with “no pads, no helmets, nothing”.Stokes vs Broad next time?
Albon isn’t the only driver who wants to give the Virtual GP another go.

Stokes said he would “100 per cent” be up for the next event, scheduled to be ‘in’ China in a fortnight.
“It wasn’t just a case of turning up on the day and giving it a go, I put a lot of time and effort into it,” explained Stokes, who was due to be in India competing in the IPL at the moment.
“It’s the most competitive thing I’ve had over the last couple of weeks.Being in a sport where you’re used to competing against other people all the time and then going to nothing – this was getting that competitive side back against other people.” Both of us in next race Stu??? Then I can compete against someone rather than driving by myself and getting lapped https://t.co/QJTfmsbYUn — Ben Stokes (@benstokes38) April 5, 2020
Stokes also insisted that he wasn’t the only cricketer interested in racing.
“Stuart Broad and Eoin Morgan are probably the two biggest fans.But I know a few of them have been to the F1 before.And since this game has come out there’s been loads of guys playing.”
So, could it be Stokes vs Broad next time? Also See: Drivers react to the Virtual GP
“Broady has just ordered one of these rigs,” he said.

“We’ve been firing out some tweets to push me and him being in the next race so that we can race against each other.”
Watch the full Vodcast – which includes a round-up of the latest F1 news from David Croft and Rachel Brookes – by clicking play on the video at the top of the article.Trending.