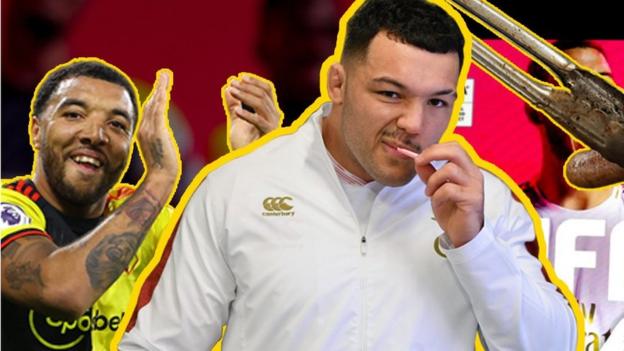 Ellis Genge has made 18 appearances for England Ellis Genge is one of the hottest properties in English rugby union.
Like a lot of us, the 25-year-old has spent the past few weeks at home.And, also like a lot of us, he’s spent plenty of that time playing computer games.
Genge – known as ‘Baby Rhino’ – names League of Legends as his favourite, but this week he was called up to take part in a Fifa tournament with fellow sportsmen, celebrities and YouTubers.
Among his rivals are team-mate Mako Vunipola, footballers Thibaut Courtois and Loris Karius, cricketers Steven Finn and Mark Wood, and Formula 1 driver Lando Norris.
Before competing, Genge spoke to us on the phone to discuss the best gamers in the England team, the sorest losers and, of course, sausages – because that’s how he famously described critics.Media playback is not supported on this device ‘We shut up the critics’ says try-scorer Genge
What have you been up to during lockdown?
“Same as everyone else.There’s nothing to do really, besides game.If you’ve got a baby, then you’re changing nappies for the day, but I’m yet to have that problem.
“I’ve been gaming online every night.

There’s a YouTuber called JCC – he got in touch with me to play Pro Clubs with him.He’s 117 games unbeaten, so I guess he’s a bit better than me.That’ll be good fun though.
“Otherwise, a bit of training and spending time with my missus, which is nice.

We don’t actually see each other that much usually.”
We saw that you and your partner have a baby on the way…
“Yeah, arriving in September, so that’s something to take my mind off it all!”
How did you get involved in this Fifa tournament?
“I don’t think it’s a secret that I enjoy gaming! I think they just assumed I was all right at Fifa…I’m actually terrible! I’m sort of relying on my childhood experience of playing Fifa 2003.”
We saw you beat Welsh rugby player Ashton Hewitt 7-4 recently.Talk us through that…
“Let’s just say it was a dark day for Ashton.I wanted to be Bristol City.When he went for Manchester City I thought: ‘I’ve got to be a team I’m quite good with.’
“I’ve always made my player play for Watford on career mode, because I get told I look like Troy Deeney.I’m a big fan of his anyway…I’ve got a bit of a thing for Watford.
“Anyway, I slapped him with Watford that day.”
Beyond Watford, which teams or players do you usually play as?
“Bayern Munich used to be my team because they’re just class.Gerard Deulofeu from Watford’s pretty decent.

Like I say, though, I’m not a massive Fifa player.”
Is it more League of Legends that you play usually?
“Yeah, strictly.”
Could you see yourself playing LoL at any kind of serious level?
“I’d love to.I’m getting a lot better.

I’ve climbed the ranks slowly during this social distancing period, but these lot are different gravy.Chalk and cheese – it would be like me asking them to play rugby.”
You played the Excel Esports staff recently.Tell us about that.
“They weren’t too sharp.” View more on twitter
Are any of your team-mates good gamers?
“Mako’s sharp on Fifa.Noel [Reid] is all right.Sladey [Henry Slade] thinks he’s decent, but he’s terrible.
“Luke Cowan-Dickie probably could have been a professional gamer.He was first in the world on Call of Duty at one point.

Mad impressive.He kept it quite quiet.”
Are any of them bad losers?
“Mako – terrible loser! I think we all are, though.It goes with the territory.”
What do you do to get into opponents’ heads?
“I just like giving it a bit of craic.I struggle when I’m playing against people in the same room because I talk too much and get distracted.”
Will anyone be called a sausage during this tournament?
“That could be my trump card! If my back’s against the wall, I’ll start the sausage chat.”
What exactly does it mean if someone’s a sausage?
“Did you ever get called a silly sausage? It ain’t nothing too deep.People think it means something much worse, but it’s just ‘silly sausage’.”
How are you generally at dealing with criticism?
“It’s all right.I don’t think the stick you get in rugby is as harsh as the criticism you see in football.
“My biggest qualm is the way rugby portrays itself as a gentleman’s sport and then people can be hypocritical on that, by slagging players off.
“Social media’s just the end of everything really.

It’s the greatest thing in the world, but it’s also the most toxic thing.”
Do you see yourself as a role model?
“I think sport on a whole just gets much better when you get diverse characters.
“The most important thing is for people to just be themselves.I’m not going to run around being disruptive, but you’ve just got to be yourself.
“If people who come from where I came from, and who usually don’t get to see rugby in a certain light, see me acting the way we acted when we were brought up, hopefully it appeals to them.”
Any people you’d like to game against?
“I don’t think there’s a big enough player pool in League of Legends, but I’d love to play against anyone.

If any of the pros want to teach me a few lessons, I’m up for it.
“With Fifa, I’ll play against anyone.I just hope I don’t lose because I’m a terrible loser.”
The Fifa tournament Genge is involved in will play out on Veloce’s YouTube channel this Saturday.Share this page.