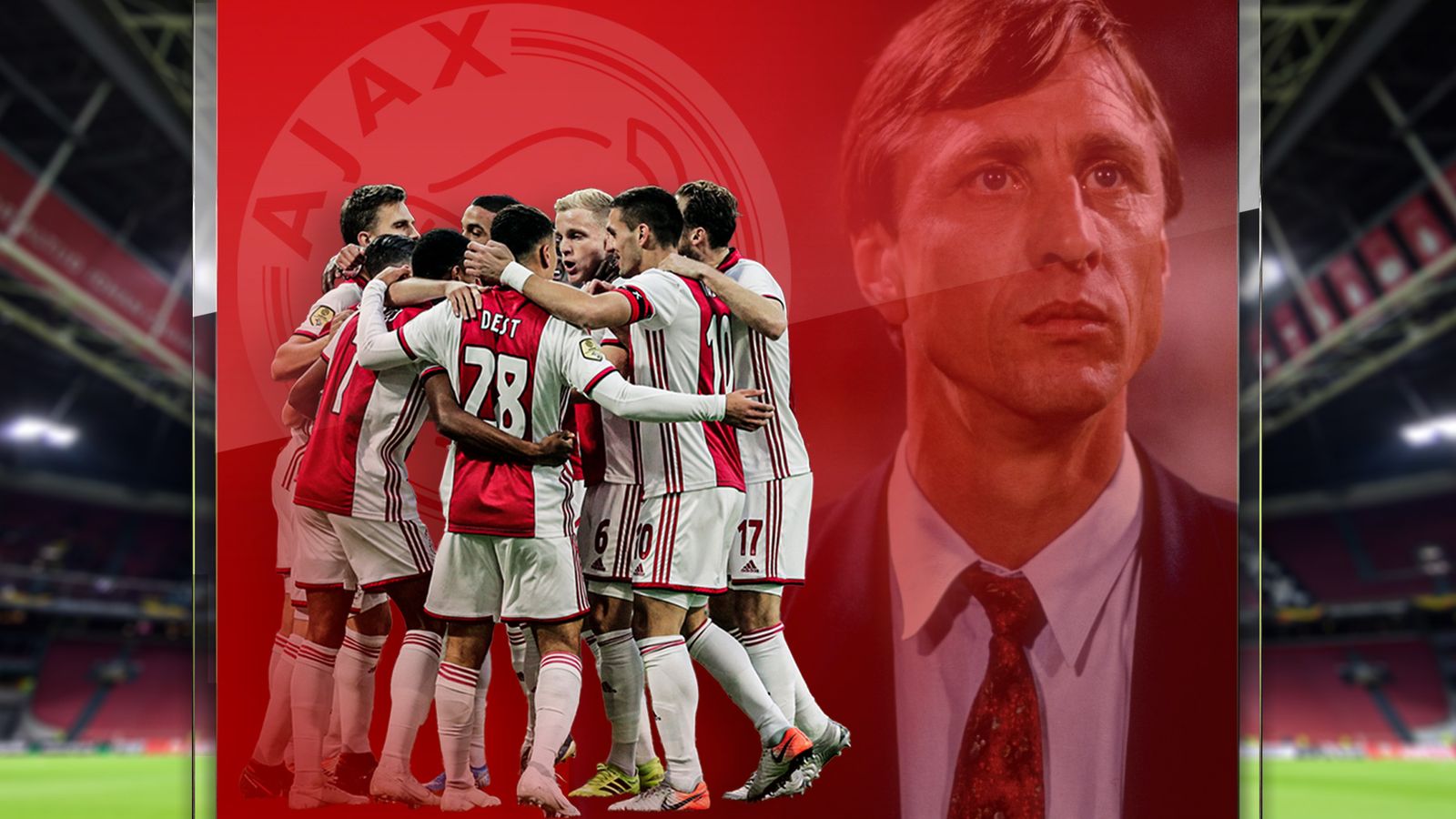 Why Ajax still rule the world

When Ajax reached the final of the Europa League in 2017, the excitement was palpable.It went up a notch when the club came within seconds of reaching the Champions League final last season.These examples proved that the famous old club could still compete with the world’s best.Ajax was still a force to be reckoned with on the global stage.
But while these successes provide a welcome fillip for supporters, anyone succumbing to the notion that Ajax need European glory to sustain their influence on the game is mistaken.Regardless of what happens on the pitch itself, this a club that is continuing to shape the way that football is played all over the world.The Ajax idea endures.
“Success at the highest level always helps,” Menno Geelen tells Sky Sports .”The fact that we did it with homegrown players playing attractive football the Ajax way helps even more.

It helps us to sell our story.But the other element is that we have built a brand around our football philosophy and that has enabled people all around the world to connect with us.”
Geelen is Ajax’s commercial director.If the cameras catch a glimpse of him, it is usually in the stands in conversation with more famous names such as director of football Marc Overmars or chief executive Edwin van der Sar.He is a man steeped in the tradition of this club.He is also the man charged with expanding the Ajax Coaching Academy.Ajax CEO Edwin van der Sar with commercial director Menno Geelen
Everyone wants a piece of Ajax.Just last summer Barcelona and Juventus paid vast sums for Frenkie de Jong and Matthijs de Ligt respectively.

Ajax cannot compete with those clubs financially, but the Dutch club is wielding its influence in another way.The battle for soft power is one that is being won on the quiet by the original trendsetters.
Former Barcelona midfielder Xavi once described the Catalan club’s model as an ‘Ajax model’ and now others want to import that model too.Crucially, they are prepared to pay for the privilege.As Geelen explains, the idea of leveraging Ajax’s coaching brand began somewhat organically but it is proving to be a financial game-changer for the club.
“Over the last 25 years, many clubs visited us to learn about our academy,” he says.

“We always showed them around and told them what we did because that is the polite way to behave.But with more and more clubs visiting and wanting information, it was not possible to do it for everyone any more.

It had become a full-time job for us to show people around.Ajax’s partnership with Guangzhou R&F is a lucrative one for the Dutch club
“Now, if a club wants to improve their academy then we come to an agreement about how to reach their goals.We can share our training methods and are coaching infrastructure.
“We have about 50 clubs we work with in the Netherlands.We have our own club in South Africa.We work for a club in Australia, Sydney FC.

In Japan we work for Sagan Tusy and in China we run an academy for Guangzhou R&F.
“It is really big for us.If you are Ajax then you are getting eight or nine million euros per year from television money.That is probably what a club like Everton gets every month.
“So we have to be creative.From Guangzhou R&F we receive three million a year for ten years – so 30 million euros in total.For a club like Ajax, that is a lot of money.

Ajax and Guangzhou R&F have vowed to construct China’s best academy
“With the other clubs too, we are getting five or six million a year from the coaching academy.Maybe in English football that might not sound a lot but for us that is almost as much as we get from television money and it is growing year by year.
“When we started it was just a few hundred thousand.

We reached a million about three years ago.Then we hit three million.Now it is five or six million.
“If the coronavirus is gone then in a few years from now we can get to eight or nine million.”
But what exactly are these clubs buying?
The prestige of Ajax has a cachet to it, of course, and the prospect of building an academy infrastructure in accordance with the principles of the best has its appeal.But many of these clubs are also receiving the practical benefit of insight from Ajax coaches.
“We had coaches here in Amsterdam who wanted a new challenge or a new lifestyle and they can now go to China for two years and then come back here,” says Geelen.”Our best coaches stay in Amsterdam but fortunately we have a lot of good coaches.” Clubs such as Guangzhou R&F now receive Ajax approved coaching
They take with them the traditions of Ajax, but also the innovations of Ajax.
“Innovation is maybe one of the most important things for us,” he adds.”We are stepping into the future head first.We have an open mind towards to change and to be creative is the key to moving forward.We want to be open to ideas and to stimulate those ideas.
“Remember, we were the first club ever to take a penalty-kick short.

Sometimes that can be difficult in football because it is very traditional in its thinking and people can be a little reluctant to change the culture.Remember, we were the first club ever to take a penalty-kick short.

That sums up a little bit how we think.We want players to be creative on the pitch so we also want to be creative in the organisation.Menno Geelen
“But you cannot sit down and think you know everything.If you think that you have cracked it then in two years you will already be out of date.We have a lot to learn but it comes to the development of players and coaches, we believe we have a unique approach.”
Some of the innovations seem small.

Ajax’s young players train in different coloured socks so that their team-mates know which is the stronger foot.

Details matter.
Others owe much to the club’s willingness to look elsewhere for inspiration.
“We have people who have come from cycling, athletics, baseball and field hockey now working in our youth development,” says Geelen.”How is it possible to cycle the Tour de France in 20 days at the highest level? Nutrition is the key to it and that is something that we can learn from when our players have to play three matches in a week.

Latest transfer updates
“It is really normal to have good food.Everyone does that.

We were giving our players the same good food before every match.But when we visited cycling teams we saw that every competitor had their own menu.

Some had more chicken than others.If you want to maximise performance you cannot give everyone the same menu.It has to be personalised.
“We have trainers from athletics teaching our players how to run.Just small changes in terms of where you position your feet have made a difference and helped them to improve.
“Esports has also been useful.

We noticed that our young players really like to play games.It is very good for your hand-eye coordination.Not all day but some of the time it helps with reactions.Maybe it is 0.01 per cent better but if it can help then we will do it.
“We were one of the first clubs in the world to have an in-house esports player.

That came from a commercial perspective because it made it easier to reach out to our younger fans and we wanted to connect with them.From the commercial side, it really works.The money that we make from esports can be reinvested in our academy.” Youngsters learn English in Guangzhou R&F’s in-house education facility
It is just another example of how Ajax are finding new ways to thrive in the modern game.
So what is next?
“Ajax is not Manchester United,” says Geelen.”We cannot do 20 countries at once so we have to do it country by country.There is a lot of interest in South America so that is the next step for us, but for now we are focusing our energy on China, Japan and Australia as well as the United States where we have an office in New York.”
Ajax might not be Manchester United, their omnipresence not quite so overt.But when it comes to shaping the game, the Ajax brand is strong.
“Our youth academy is our lifeline,” says Geelen.

“We cannot buy legends but we can create them.We know we are not the richest club in the world but when it comes to influence in how the world is playing football? We are still at the top, I think.