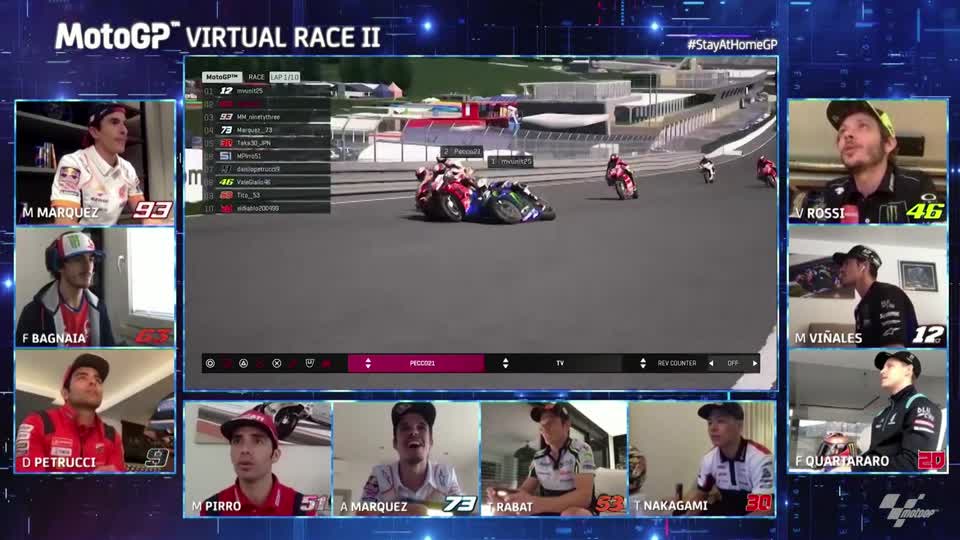 GRAPHIC REFLECTING FINAL RESULTS
17.(SOUNDBITE) (English) MOTOGP VIRTUAL RACE 2 WINNER, FRANCESCO BAGNAIA, SAYING:
“A lot of concentration for this race because Maverick (Vinales) when overtake me, he was setting a really good pace and in one lap I lose (missed) a hairpin that I recover in the last lap after.But then when he crashed, I start making a lot of mistakes.My rear tyre was so hot.160 degrees, so, was very, very difficult to manage the grip, but anyway, I tried to stay in front of him.

But, in the last lap when he overtake (overtook) me, I try everything (to get this win).”
STORY: Pramac Racing’s Francesco Bagnaia reigned supreme as he held off a dramatic last lap challenge from Maverick Vinales to claim victory in the second MotoGP Virtual Race at Austria’s Red Bull Ring on Sunday (April 12).
With the coronavirus pandemic wreaking havoc in the sporting world and causing multiple postponements and cancellations in the 2020 MotoGP season, Bagnaia started the second edition of the #StayAtHomeGP on pole but was caught up in a mass crash on turn one that saw Takaaki Nakagami take the lead.
The Japanese LCR Honda rider’s lead was short lived as Bagnaia quickly moved into first place, before Nakagami managed to crash into both Marquez brothers, Marc and Alex – the latter the winner of the inaugural virtual race.
Bagnaia and Monster Yamaha’s Maverick Vinales swapped leads at the front before Bagnaia’s final lap overtake saw the Italian hold on for a hard-fought victory.
(Production: Stefan Haskins).