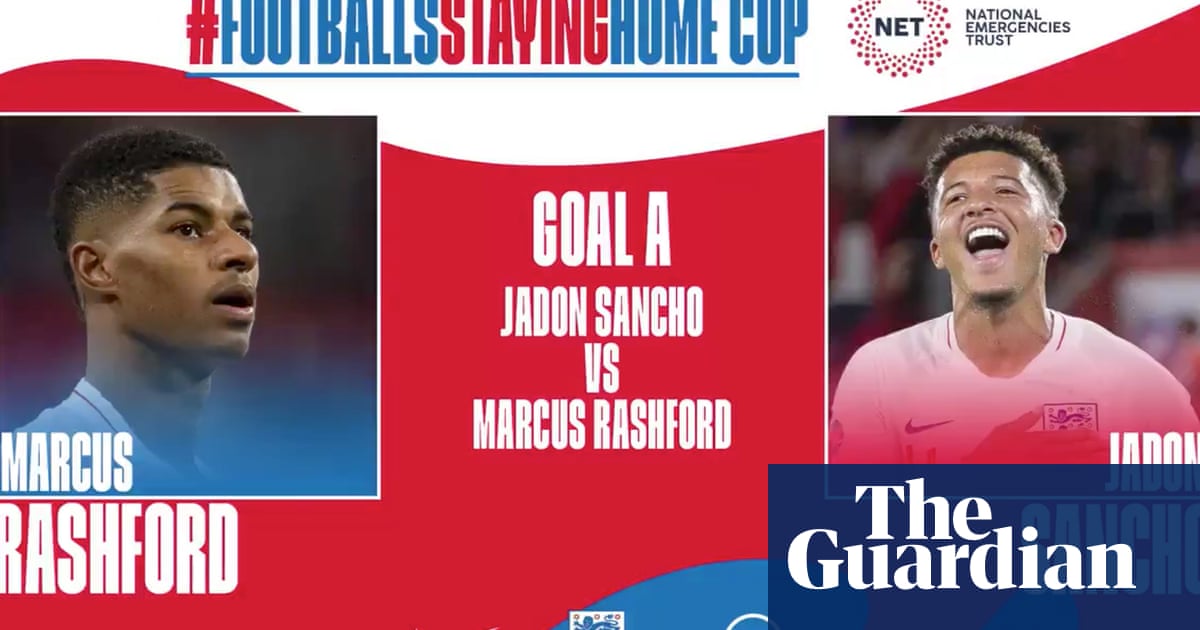 A growing number of online tournaments are raising funds and providing entertainment for locked-down football fans.F rom a half-cleared corner, the ball falls to Jordan Henderson.With a shimmy he turns past Danny Rose and finds Jadon Sancho in the box.The winger, wearing England’s red away shirt, finds room behind Harry Maguire and stands up a cross to the back post where Marcus Rashford is waiting to crash a header into the net.“Yes! Sancho to Rashford!,” screams Rashford at Sancho.“I know your hands must be sweating right now!”
My favourite game: Liverpool v Milan, 2005 Champions League final | Tom Jenkins Read more
Rashford, it turns out, has spoken too soon.Before half-time, Raheem Sterling has played in Rashford for a cool side-footed finish past Jordan Pickford: 1-1.

Into the second half and it’s Rashford’s turn to repay the compliment, playing a cute one-two with Sterling inside the England box to score the winning goal.Final score: 2-1 to England .“I swear down I’m going to go back to the drawing board,” Rashford says to Sancho.

“I’m going to play you again.”
While it may sound like the transcript of a fever dream, the above events did actually take place.On Friday night, Rashford and Sancho, the real-life versions, took control of their own avatars in a game of Fifa.

Streamed live as part of the Football Association’s #FootballisStayingatHome Cup , Sancho progressed to the round of 16 in an all-England video game challenge that continues throughout this week.
#Footballistayingathome is just one of a growing number of online tournaments taking place during the coronavirus crisis.This week EA Sports, maker of Fifa, will launch the Stay and Play Cup , in which players from 20 of Europe’s biggest clubs will compete to win a $1m donation to a charity of their choice.
Trent Alexander-Arnold, for example, will be Liverpool’s ambassador (he was dumped out of the FA’s tournament by Max Aarons in the first round).Other competitions include one sponsored by La Liga and a Milan derby played on the Fifa rival Pro Evolution Soccer.There’s also Rio Ferdinand taking on Mason Mount in a one-off, if that’s your thing.
Facebook Twitter Pinterest A screenshot from Friday’s clash in which Marcus Rashford (England) and Jadon Sancho (also England) contested a game of Fifa 2020.Sancho won 2-1.Photograph: Shutterstock
The abundance of celebrity Fifa matches is proof that, like many of the rest of us, footballers are looking for ways to entertain themselves during lockdown.

It’s a chance to raise funds for good causes, too.But it’s also something of an experiment: one that could show whether video games can fill the void where live football used to be and, also, whether football – the kind played on grass – can engage with a generation of people who prefer their games virtual.
“You can look at these Fifa tournaments and surrounding competitions as football coming to esports and trying to recapture the young demographic,” says Adam Fitch.

As editor of Esports Insider, Fitch covers the booming competitive video games industry, a sector which now generates a billion dollars in revenue each year and whose biggest events, like the League of Legends grand final, can attract audiences in the tens of millions.
When it comes to competitive gaming, Fifa is something of an also-ran.“In esports we have rankings where we tier games,” he says.“Fifa is in the third tier.There were 170,000 who watched the first La Liga tournament [which Marcos Asensio won for Real Madrid] and for Fifa that’s good.

But the League of Legends European Championship pulls in more than that each week.”
Fifa lacks certain dynamics that make for a great esport, not least the the fact the game reboots each year.Fitch speculates that it is mostly football fans who will be watching these celebrity match-ups, as for any esports enthusiast the quality of play would be too low.
Peter Bonetti, former Chelsea and England goalkeeper, dies aged 78 Read more
As of Sunday, the YouTube video of the Sancho v Rashford match had reached 100,000 views.And for a watching football fan the interest was in seeing how the players reacted to the game, as much as how they played it.Alongside the game footage and the chatter of a pair of commentators, were two small windows into the competitors’ living rooms.

Sancho was sat on a chair designed for gaming, Rashford bent forward on his sofa.
As the game went on you could hear Rashford get more and more peeved with himself.“Don’t mess about with the ball,” he shouted at Harry Kane at one point, before deliberating whether to substitute the England captain (after consideration, he stayed on).“I just find it fascinating listening to the players,” one commentator said, as he talked over them.
Not game enough for the gamers and not football enough for the fans, Fifa may be having its moment as a spectator sport, but the jury is out as to whether its truly ready for primetime.“I don’t see it lasting,” says Fitch.“Twenty per cent may stay, but the rest will go back to football, your Man Uniteds and Arsenals and so on.”
There is one audience lapping up virtual football right now, he points out, and that is the bookies.Gambling sites are suddenly serving up odds on any number of Fifa contests, often in obscure eastern European eSports leagues.“It’s the only type of thing you can bet on,” says Fitch.