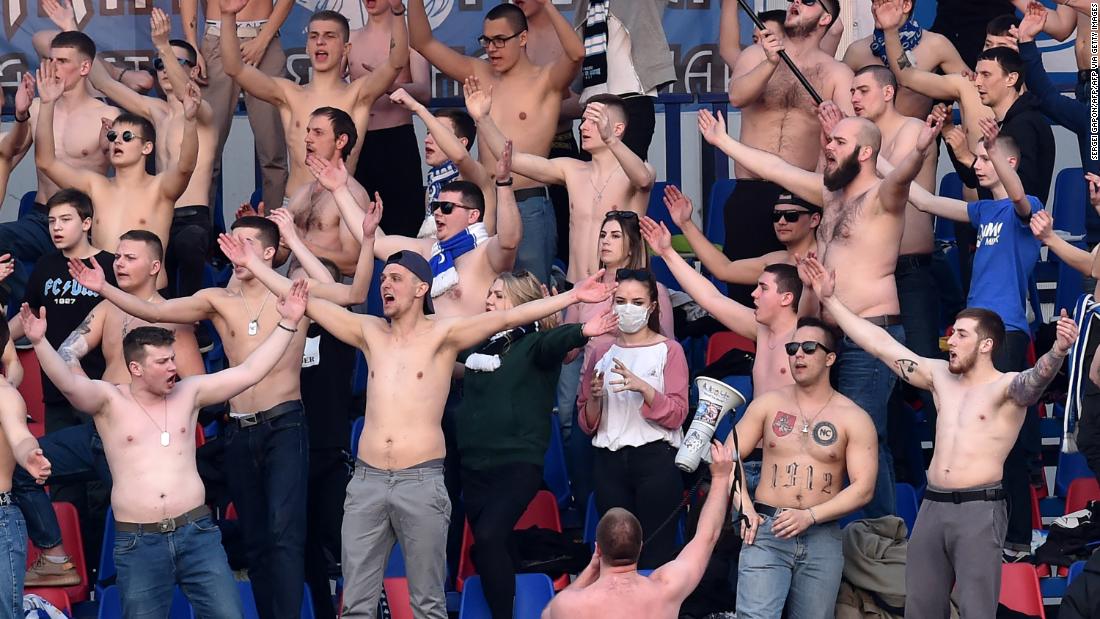 (CNN) Whilst most professionals sports have ground to a halt amid the coronavirus pandemic , there’s still a small number that are finding a way to continue.
Football, in particular, has been severely affected with all of Europe’s major leagues now suspended for the foreseeable future.However, for those fans desperate for a football fix, there are still some leagues around the world that are playing on.The Belarusian Premier League is now the only active competition left in Europe and has seen its popularity soar as a result.The country’s football federation even secured new broadcasting deals in as many as 10 countries, Reuters reports, including Russia, Israel and India.Read More READ: In a world gripped by fear, marble racing proves welcome distraction Fans of FC Minsk support their team during the coronavirus outbreak.

Mannequins and cardboard fans Incredibly, fans are still able to attend the matches in Belarus although attendances have been dwindling with supporters wary of the risks involved.As a result, one Belarusian club has started filling its stadium with virtual supporters.

Dynamo Brest has invited its new-found fan-base to pay for their face to appear on mannequins within the ground, with the money raised being donated to the fight against coronavirus.There have been 2,919 confirmed cases of Covid-19 in Belarus with 29 deaths, according to the latest figures .Elsewhere, leagues in Tajikistan, Burundi and Nicaragua have also all stood firm against criticism and have continued to play on.Tajikistan and Nicaragua have followed guidance given by the World Health Organisation (WHO) and are playing games behind closed doors, with the latter broadcasting matches live on television and the internet.Taiwan recently became the latest to launch its football division, with the new season starting on Sunday.

Players hope the extra attention will help them complete a move to one of the world’s more competitive leagues.World players’ union FIFPro says it’s incomprehensible that games are continuing.

Cardboard cutouts of fans filled parts of the stadium for Saturday’s washed-out baseball game.Other sports play on In addition to its football league, Taiwan has also welcomed the return of professional baseball.The Chinese Professional Baseball League was due to begin on Saturday but a rain delay meant the season instead started on Sunday with a match between Chinatrust Brothers and the Uni-President Lions at Taichung Intercontinental Baseball Stadium.No fans were allowed to watch from within the stadium but the game was broadcast live.

Baseball team Rakuten Monkeys had filled parts of its stadiums with mannequins and robotic drummers for the proposed curtain-raiser on Saturday.Taiwan has managed to limit the spread of confirmed coronavirus cases to just 393 and six deaths, according to the latest figures.

Horse racing has also managed to continue in a number of countries across the world, albeit behind closed doors.Tracks in Australia, Hong Kong, Japan and Sweden are among those to have continued racing through the crisis.Meanwhile, the world of esports is continuing the thrive in the absence of mainstream sport with hoards of professional athletes turning their attention to gaming..