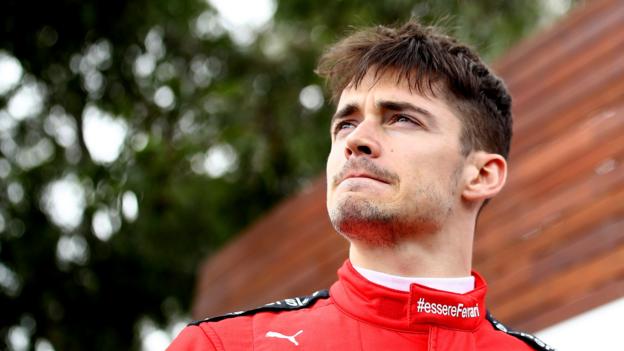 Read more about sharing.”In my spare time I like to do my job – only on a computer” He scored four pole positions in a row in his first season for Ferrari last year.And after only a couple of weeks of practice is now on course for an unprecedented quadruple.
Well, no idea if it’s unprecedented, given how many people have games consoles, but Charles Leclerc’s having quite the week when it comes to driving his Ferrari from the no doubt considerable comfort of his Monaco home.
Yeah, he’s into esports – and sim racing in particular – in a big way.
Having won the previous Virtual F1 GP, held at a simulated Albert Park circuit in Melbourne, after just a few days of practice, Ferrari’s young driver has become obsessed.
On Friday he helped raise more than $70,000 (£55,000) for charity to help fight coronavirus – alongside lots of other drivers – by winning the Race For The World.Real Madrid goalkeeper Thibaut Courtois also got involved.
Then after a bag of crisps and tin of pop (possibly) and a few hours’ kip, he was back at it again.

This time for the Veloce Not The GP Versus series, where drivers including Jamie Chadwick, Alex Albon and Nicholas Latifi went head-to-head in one-lap race-offs.Oh, and Courtois again – who went out in the first round.
This time, Leclerc beat Williams’ Latifi – yet to actually contest a real grand prix thanks to coronavirus – in the final.
So check back later to find out how Leclerc got on after his final race of the weekend – the Formula 1 Virtual Chinese GP (it would have been the proper one this weekend), at 18:00 BST on YouTube and Twitch.And, yes, Courtois is having a bash at that one too.
Leclerc will surely do better than he did in a lorry race the other day with Williams’ George Russell….