HomeEsportsFor once, Nadal found wanting as he is flummoxed by Instagram 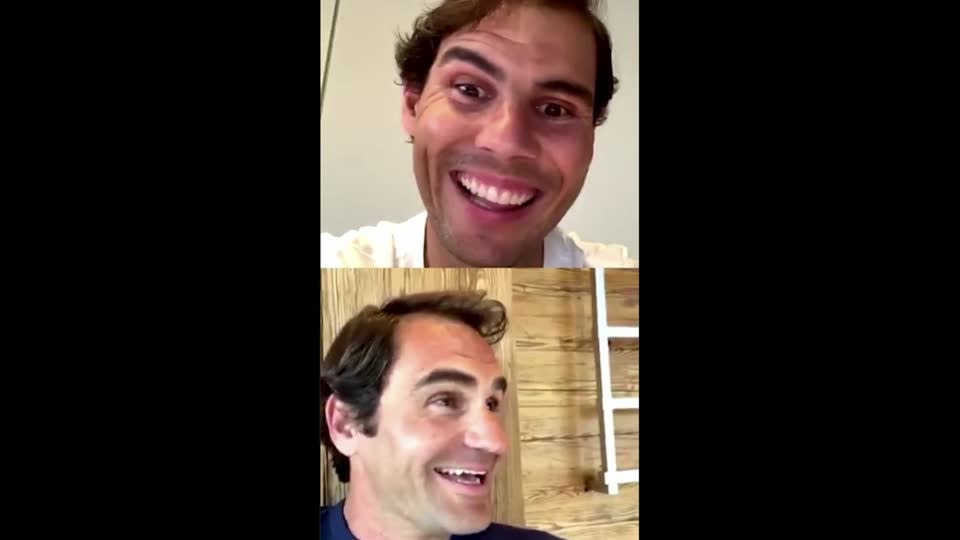 For once, Nadal found wanting as he is flummoxed by Instagram

How are you doing?”
NADAL: “It’s sure myself.”
FEDERER: “Me too.I went in and out and in and out I don’t know how many times but, in the end, we made it.My God.”
NADAL: “We are old enough for all these things.”
FEDERER: “Oh God.You couldn’t have chosen a better guy (LAUGHTER).”
PORTO CRISTO, MALLORCA, SPAIN / LONDON, ENGLAND, UNITED KINGDOM (APRIL 20, 2020) (INSTAGRAM – NO RESALE, MUST COURTESY: “INSTAGRAM/RAFAELNADAL”)
2.WHITE FLASH
3.

(SOUNDBITE) (English) RAFAEL NADAL AND ANDY MURRAY, SAYING: (SOUNDBITE BEGINS WITH MURRAY APPEARING AND NADAL BLURRED FOR THE FIRST FEW SECONDS)
MURRAY: “Rafa?”
NADAL: “How are you doing Andy?”
MURRAY: “I can only see…oh there you go.You’re back.”
NADAL: “These Instagram lives are… I am going crazy with this, man.”
MURRAY: “Yes, it’s a bit tricky getting people on it but they are good.People seem to like them once we manage but it was very amusing watching you.”
NADAL: “Hey.Next time, next time I’m going to be more ready.”
MURRAY: “Okay (LAUGHTER).”
6.WHITE FLASH
7.

VIEW OF NADAL’S COMPUTER SCREEN, RAFA, SAYING (English): “Oh guys, I hope you are enjoying the instagram live.As you can see, I am a disaster in everything but I am trying hard guys.”
PORTO CRISTO, MALLORCA, SPAIN / UNKNOWN LOCATION, SWITZERLAND (APRIL 20, 2020) (INSTAGRAM – NO RESALE, MUST COURTESY: “INSTAGRAM/RAFAELNADAL”)
8.(SOUNDBITE) (English) RAFAEL NADAL AND ROGER FEDERER, SAYING:
FEDERER: “(The) Academy is open or no it’s closed it must be closed, right?”
NADAL: “No, it’s closed.”
FEDERER: “When are you hoping to open? Do you have any idea or not yet?”
NADAL: “No idea today because we are following the rules.”
FEDERER: “Yes.”
NADAL: “We are following what the authorities says today.

Today I explained just a little bit before to the followers there is 85 kids inside the Academy and 70 workers; psychologists, coaches, people from the kitchen, physios, physical trainers.Everybody is inside taking care of the kids and I spoke with the kids and with the coaches a couple of days ago and have been great.They are happy even if they want to be practising tennis and for the moment we are not allowed to do it.”
FEDERER: “So you’ve not played since Indian Wells or what?”
NADAL: “The kids, or me?”
FEDERER: “No, you.”
NADAL: “Me? Me, I didn’t touch a racket since Indian Wells (LAUGHTER).

A long time.”
FEDERER: “Perfect.You won’t be able to play tennis anymore when you come back (LAUGHTER).”
NADAL: “I hope, I hope to remember something when I come back that’s for sure.You? How are you doing?”
FEDERER: “Yes, look I’ve been hitting a little bit against a wall, rehab with the knee.”
NADAL: “It’s good the knee? It’s improving?”
FEDERER: “Yes, it’s okay.I had a really good first six weeks, then it was a bit slower, now it’s getting better again but I have plenty of time so there is no stress, no rush, if there’s anything positive that’s the only thing really.I have plenty of time.I mean at the end of the day I just want the knee to be good.You know, it doesn’t matter when I return.So, I’ve been hitting a little bit against a wall and doing my rehab, my fitness and everything.

So, no things have been okay for me, you know, and I feel happy, you know, even I think after the second surgery… I mean I don’t know how many you’ve had but it’s easier the second time around, you know.”
NADAL: “Yes, I think so.”
FEDERER: “But I don’t need to experience a third one that’s for sure.”
NADAL: “No, better not.”
FEDERER: “No, exactly.”
NADAL: “At least not during our tennis careers anyway.”
FEDERER: “Exactly.We can do another one maybe later at some point but not at the moment, yes.”
Story continues PORTO CRISTO, MALLORCA, SPAIN / LONDON, ENGLAND, UNITED KINGDOM (APRIL 20, 2020) (INSTAGRAM – NO RESALE, MUST COURTESY: “INSTAGRAM/RAFAELNADAL”)
9.WHITE FLASH
10.(SOUNDBITE) (English) RAFAEL NADAL AND ANDY MURRAY, SAYING:
NADAL: “Yes that’s how it is but the kids are fine.

The kids are inside the Academy.”
MURRAY: “So, there’s still a lot of them there?”
NADAL: “Yes, because I think the Academy make… we make a big effort because for us it’s tough but at the same time it’s safer for the kids to stay in the Academy than travel back to their homes because the epidemic was so big in that moment so I think for the safety of the kids it was better that they stay inside the Academy so we closed it, everything.So, everybody has been inside the Academy since the beginning of the quarantine.Nobody can come in, nobody.So, if somebody has to go out for some reason they cannot be back until the situation improves and that’s the way that we proceed and like this we’re lucky now that there is not one case of the coronavirus inside the Academy so…”
11.

WHITE FLASH
12.(SOUNDBITE) (English) RAFAEL NADAL AND ANDY MURRAY, SAYING:
MURRAY: You’re playing in the virtual tennis event, right in Madrid? I spoke to Feli (Feliciano) Lopez.He messaged me today and said that you’d been practising for like three or four hours a day on the PlayStation.”
NADAL: “Yes.No, I’m not doing anything else (LAUGHTER).

First match today.”
MURRAY: “I played last night, and I was playing as you.So, you were my… I chose you to play obviously on clay.”
NADAL: “Are you playing the tournament or not?”
MURRAY: “No, no…Yes, I’m playing in the tournament.

I’m playing in the tournament, but I chose to play as you against… I was playing against Roger.”
NADAL: “And you hit against the backhand all the time?”
MURRAY: “We, so you and me, were playing unbelievable but after a set your guy was like unbelievably tired.

It’s like his energy thing was like (low).I was like I never saw you getting tired after one set before.”
NADAL: “No, they don’t want me to do well this year in the Madrid Open.”
MURRAY: “But, yes it will be interesting to see how that goes.It will be good fun.”
NADAL: “Are you practising? We can play a match later.”
MURRAY: “Yes? I’d be up for that, yes.

I’d be up for that.I don’t have a character so I’m not in the game, you know like as myself, so I have to choose someone else to play with, so.”
NADAL: “Well, that doesn’t matter.You can choose I don’t know, maybe Nick (Kyrgios) or something.”
MURRAY: “Maybe, maybe (LAUGHTER).Maybe I’ll take Nick, yes, maybe I’ll take Nick (LAUGHTER).”
13.

WHITE FLASH
14.(SOUNDBITE) (English) RAFAEL NADAL AND ANDY MURRAY, SAYING:
MURRAY: “What time are you having your dinner now? 11pm?”
NADAL: “Now, now it’s tough.Doing these timings are very difficult, man.It’s… some days I went to sleep around 2 in the night, 2 in the evening, some days 3(a.m.).

I don’t know, every day is different because… it’s difficult.I don’t have kids like you so I think the kids organise you a little bit better during this quarantine because with our routines the next day I cannot go out so I’m just doing the nights, some times I am doing things; I’m watching some series, I don’t know.”
MURRAY: “Yes, I’m 6…6 a.m.

every morning the kids are getting us up.So, enjoy your late nights and your lie-ins whilst you don’t have kids because…”
NADAL: “I hope to be in this situation in not very a long period of time.”
MURRAY: “Okay, well now is a good time because we’re at home with the family all the time.Now is a good time.”
NADAL: “Well, you never know, you never know (LAUGHTER).”
MURRAY: “Okay.”
CAPE TOWN, SOUTH AFRICA (FILE – FEBRUARY 7, 2020) (REUTERS – ACCESS ALL)
15.VARIOUS OF NADAL AND FEDERER TAKING A SELFIE
16.VARIOUS OF NADAL AND FEDERER PLAYING TENNIS ON A MINI COURT IN FRONT OF CAPE TOWN CITY HALL / TABLE MOUNTAIN IN BACKGROUND
LONDON, ENGLAND, UNITED KINGDOM (FILE – JUNE 29, 2019) (REUTERS – ACCESS ALL)
17.MURRAY PRACTISING AHEAD OF WIMBLEDON
18.VARIOUS OF MURRAY AT THE NET
STORY: Throughout his incredible career it has taken a pretty special opponent to worry Rafa Nadal but the Spanish great met his match in the form of Instagram Live on Monday (April 20).
Push the 33-year-old into a corner on a tennis court and he inevitably unleashes a wickedly spinning forehand or backhand to crush the spirit of the guy across the net.
Fans logging on to the social media platform for Nadal’s eagerly-anticipated live chat with Roger Federer saw a very different side of the Mallorcan.
He may have 19 Grand Slam titles, one shy of Federer’s all-time men’s record, but when it comes to IT skills, he resembled a Sunday morning park hacker crumbling under pressure.
With 40,000 viewers logged on, a flummoxed Nadal stared into cyberspace, trying to figure out why the Swiss maestro, isolating at home in Switzerland, refused to appear.
Eventually, to Nadal’s obvious relief, the great man popped up to share a few minutes of chit-chat about how each is dealing with the shutdown of tennis because of the coronavirus pandemic.
“Finally!” Nadal said to a chuckling Federer.
While Federer said he has been practising against a wall, when not entertaining his four children, Nadal said he has not struck a ball.

“Perfect! You won’t be able to play tennis any more when you come back,” a laughing Federer said.
Swiss Federer said the extended lay-off has meant he has had time to rehab his right knee after surgery in February.
“I’ve got plenty of time, there is no stress, no rush, if there is a positive that’s it,” he said.
After 10 minutes Federer signed off, leaving Nadal wrestling with his technology as he tried to locate Andy Murray, who began the trend of Instagram Live chats last week with Novak Djokovic.
“I think Andy’s hiding.” Nadal said, staring forlornly at his screen.
Murray, who trails Nadal 17-7 in head-to-heads, clearly enjoyed his old adversary’s discomfort when he finally popped up sitting on a large white sofa.
“It was very amusing watching you,” Murray said.
After some pleasantries, the conversation moved on to the forthcoming virtual Madrid Open being contested with joysticks rather than tennis rackets.
While Nadal admits he is an esports novice, Murray said he might have found an early edge.
“I played last night and I played as you,” Murray said.”I played as you against Roger, on clay obviously.
“We, I mean me and you, we were playing unbelievable but after a set your character was unbelievably tired.I thought I had never seen you getting tired after one set before.”
After Nadal then challenged him to a game, Murray said he does not even have his own character on the video game.
“I can’t be myself so I have to choose someone else so maybe I will choose Nick (Kyrgios)!”.
While Nadal said he has sometimes being going to sleep at 2am or 3am during lockdown, Murray said having three young children meant he was tucked up early for the 6am alarm call.
“I hope to be in this situation in not a very long period of time,” Nadal said to which Murray teased “Well now is a good time, now you’re home all the time.”
Earlier, Nadal said 85 young tennis players have been confined to his academy in Manacor and all were safe with no cases of the coronavirus reported.
(Production: Tim Hart).