HomeEsportsBBC World News: ‘I want to put a smile on people’s faces’ – Leclerc on being a lockdown sim racing star 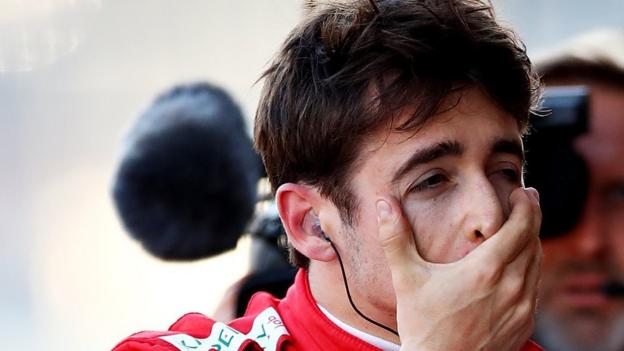 BBC World News: ‘I want to put a smile on people’s faces’ – Leclerc on being a lockdown sim racing star

Read more about sharing.”Training, simulator, cooking – that is basically my days,” says Ferrari driver Charles Leclerc of his life during lockdown.
The cooking is not going that well, it seems.”I am still very bad at it.Pasta, chicken.I am not taking too much risk.”
The simulator, though, is another matter.Leclerc is quite new to online racing, but he has proved as annoyingly talented at it as he is at the real thing – he has won his first four major e-races in a row, the most recent one Formula 1’s official virtual Chinese Grand Prix last weekend.

Leclerc completes esports quadruple as Poulter crashes being interviewed
Not only that, but he has proved a hit with the fans, streaming his races live on Twitch, causing a comedy moment when unable to end his feed properly, and just generally coming over like an all-round good guy, along with his F1 racer mates Alex Albon and George Russell, with whom his friendship and rivalry goes back to their childhoods.
“Streaming on Twitch is something I did not expect to enjoy but I did,” Leclerc says.”For the people who follow me, it is the closest you can get to the real me.

On an F1 track there is a lot of pressure and so it is a bit different, but playing with people I have known for ages it is more natural.” View more on twitter ‘I want to put a smile on people’s faces’
Leclerc emerged fully into the limelight last season – his first at Ferrari and only his second in F1 – as one of the brightest stars of the new generation, taking more pole positions than anyone else and winning two races.
He is clearly abundantly talented – but as with all the biggest sports stars, the ability is backed up by a lot of hard work.And he has transferred that approach to his virtual racing as well.
“It is quite a lot of practice,” Leclerc says.”I did not have the simulator for a long time but now I have it I am playing quite a lot – probably five hours a day.I am training to try to be competitive, and everything we do we want to be competitive as drivers.

There is a bit of a competition starting and we want to win.
“There is a lot of fun but there are some races when we take it quite seriously.The official F1 races we want to win.Other races we are doing together it is mostly for fun.We will organise some other races in the next few days.”
More than the sporting competitiveness, though, Leclerc says he sees streaming his online races as a way to give back to his fans and provide the public with a bit of light at this dark time.
“At the moment my main priority is to try to entertain the people at home and to keep myself entertained and to try to train on the simulator,” Leclerc says.
“So I am thinking of some ideas I can come up with to help the people who are at home bored who do not have a simulator like me and put a smile on their face.I think it has worked quite well.” Media playback is not supported on this device Beating Vettel is a great challenge – Leclerc
He is too modest to mention that he also raised more than $71,000 (£58,000) for the World Health Organization’s Covid-19 relief fund at the weekend.
Why is he so concerned about entertaining the public?
“Just because I see how my mum and brothers are here in Monaco; also speaking with all my friends,” he says.”It is tough times for people being at home who don’t have much to do.
“So to be able to race in a different way and to see people smile; I have had a lot of positive reactions to what I have been doing on Twitch and saying it helps them go through this tough time.
“That cheered me up massively and I am just happy to do it still.

And it helps me to be closer to the people who are supporting me and they can see me in a more natural way.” Coping with lockdown
Natural is how Leclerc comes across, whether it be racing online or during an online news conference with journalists across Europe.
The call is held early in the morning – just as with his team-mate Sebastian Vettel last week – and Leclerc laughs when someone brings up his ‘bed head’.His hair is messy and unkempt, just as you might expect of someone on lockdown at home, Ferrari shirt notwithstanding.
He describes the world’s present situation as “not very fun” but says he is coping well so far, spending lockdown in his Monaco home with his girlfriend.”I am more enjoying than struggling,” he says.”Sometimes we get angry with each other, but that doesn’t happen often.”
Is he doing anything that would surprise people?
“I am playing piano and guitar,” he says.”I am not very good at it.Apart from that, not really.

I am spending time with my girlfriend, (physical) training, playing the simulator and playing music.I am also reading a few books about the history of Ferrari, watching TV.There is not much more to do.”
He admits he is finding the situation a mental challenge, but says the sim racing is helping him “stay focused on the [real] goal and remembering that I am going racing.” Leclerc managed to crash competing in esports in exactly the same place he came to grief in Baku during qualifying last year Looking forward to racing again
F1’s current hope is to start the season with two races in Austria in early July followed by two at Silverstone, before continuing with the rest of the season, a handful of events in Europe, then on around the rest of the world.
If the plan comes off, the drivers will be going into the season ‘cold’ after four months out of their cars.Leclerc thinks such a long break could liven up the races.
“It is going to be strange,” Leclerc says.”The first time for any drivers not to be driving for a long time and then to go straight into first practice, second practice, qualifying and the race.It is going to be very tricky.Maybe it will mix up things a little bit for us drivers to adapt in a different way.I am definitely looking forward to it, anyway.”
Like Vettel, Leclerc is not especially keen on the idea of racing without spectators, but he accepts that F1 needs to do what it can to get the season going as soon as possible.
“It will definitely not feel like a normal race because during a normal race weekend you could really feel the support of the fans,” he says.

“It would cheer you up when you had bad times and even more when you had good times.
“It is going to be different but it is better than nothing and if we can start like this in a safe way, it is good.It will entertain people at home and help us get back to the car, which we are all missing the most.”
He rejects any thought of the season or eventual winner being devalued because the championship is shorter than intended – and says the shorter season might even bring benefits.
“Mercedes and Lewis [Hamilton] are still the favourites even if it is an eight-race championship.Maybe we will risk it more on track with risky strategies and risky overtakes.Maybe it will pay off and maybe not.
As for having multiple races at single tracks, and the question of whether that is fair, as it might suit one team more than another, he says: “You can always [talk about] the fairness but we mostly have to look at the situation and try to make the most out of it.
“If we have to race twice on the same track, we should look at this possibility to have the most races possible.”
And he likes the idea – which may not be realistic – of racing the other way around on certain circuits.”This would be very, very cool,” Leclerc says, mentioning Silverstone in particular.Leclerc at the Italian X-Factor last year with Alfa Romeo driver Antonio Giovinazzi.When in Milan…and all that Training and keeping the right mindset
It might still be months before the season can start, but Leclerc says he is already preparing for it.
“It is going to be difficult – the mindset and to find the bubble you need to be in to get into the car,” he says.

“It is something you get better at every time you do it and it is difficult to get back into it.
“But at home I am trying to do this, to put myself in ‘the zone’.Even if it is not to get into the car, to train myself to be in the zone – every time I go training, try to be as focused as possible to keep me working on this.”
As for Ferrari’s chances, he does not expect to start the real season as successfully as he has the virtual one.
“I still believe we have been struggling a bit during testing, so we need to catch up.

Last year we had a good progression throughout the year.We need to keep working and I am pretty sure the results will come.
“It will be a difficult season because as soon as it is started there will be no breaks.The work on track will be more important than ever.It is going to be important to be focused straight away.” Share this page.