HomeEsportsCan you make a living from esports during lockdown? 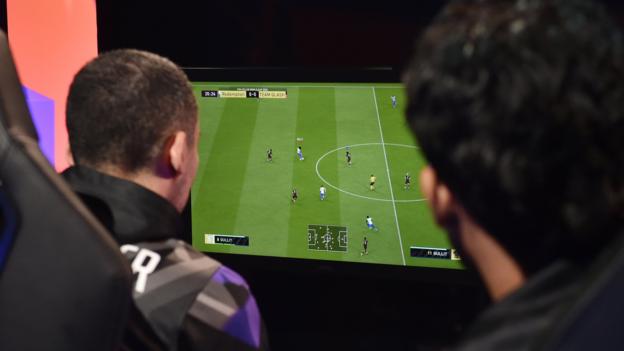 Can you make a living from esports during lockdown?

Can you make a living from esports during lockdown? By Jonathan Sutherland Jorge Chaves (far left) represents Celtic at esports Lockdown means many of us are reaching for games console control pads to pass the time.
So how good would it be if your hobby could earn you money and be your full-time job?
BBC Scotland asks two young men who already earn a living in esports how feasible it is to get started now.Scouted by Celtic
Jorge Chaves is a professional esport gamer for Celtic, so how did a Spanish computer engineer end up attached to a professional football club in Scotland?
As ever it all started with an obsession with a game, in this case Pro Evolution Soccer (PES).
“I used to play with my cousin at his home because I didn’t have a console,” he told BBC Scotland.
“When I grew up, I had my first console and my first videogame – ISS Pro Evolution Soccer.I loved this game.In 2013 when I was 19 my university created a PES tournament with the official site in Spain.I won it and I searched for more.”
“In 2014 I reached the Spain national finals and I was growing step by step.In 2016 I went to my first international tournaments in London and Lisbon.

Year by year I was getting more success.”
Eventually Jorge entered the efootball pro competition where ten professional football clubs compete for prizes.This is how he got spotted by Celtic.

He now trains for three to five hours every day.
Esports is huge and growing.As an industry it is worth over a billion US dollars annually, and the prizes on offer to the best players are staggering.
At the FIFA eWorld Cup Grand Final at the 02 Arena in London last year the overall prize pool was $500,000 (£405,000).The winner – Germany’s Mohammed Harkous (aka ‘MoAuba’) – pocketed $250,000.Over 30 million viewers tuned in to watch the action unfold over the weekend.
So what is Jorge’s advice to aspiring gamers who would like to make it big in esports?
“It’s difficult because there are a lot of people that want the same as you.

But if you have skills and you practice for a lot of time against very good players you will have some chance to earn money at e-sports.”
“There are different tournaments, tournaments with low prizes between €100 and €1000 you can join easily and they often are open to everybody.”
“But tournaments with thousands of euros of prize money are usually the official competitions from the company game.You have to qualify to join one of these tournaments.”
“I won the European regional in Milan but the highest prize money I ever got was the world regional stage in Berlin.” Playing for Spain star Morata Liam McCarron is a world champion on the free mobile game ‘Clash Royale’
Esports covers a wide variety of games.

Not all of them are based on sports.

In fact, far from it.
Liam McCarron began playing the fantasy strategy game Clash Royale on his mobile phone when he was off school ill.
Now at the age of 18 he makes a living as a professional gamer for the Spanish-based Ramboot Club team, which is part-owned by the Spain and on-loan Ateltico Madrid striker Alvaro Morata.
Liam is so good at Clash Royale that he won the Mobile Esports Open in Dortmund last year, scooping up the top prize of $16,000 (£13,000).

His advice is simple.
“To get started just play the game for fun.If you eventually find you are very good at it and you enjoy it as well then you can think about making a career out of it.”
“The very top earners in esports are earning similar salaries to footballers, millions a year.

But that’s only for the very top few.”
Liam is currently at home in Largs preparing for his next tournament.He puts in at least six hours of practice a day.
“To start off you need to work out if the game that you are playing has money involved.So what you can do is search up the game name and then ‘esports’ and if there is an esports scene inside that game you can find it on the internet.”
So how competitive is a game like Clash Royale?
“It is quite big.

It has hundreds of millions of players across the world, and because it is free it is very accessible.I would say esports with lots of players like Fortnite are probably the most lucrative.”
Kyle Giersdorf (aka ‘Bugha’) can testify to that.The 16-year-old American became Fortnite world champion last year winning $3m (£2.3m) in the process.
But it is worth keeping thoughts of any success in perspective – over 40 million people entered that competition.
So if you fancy your chances next time, good luck.