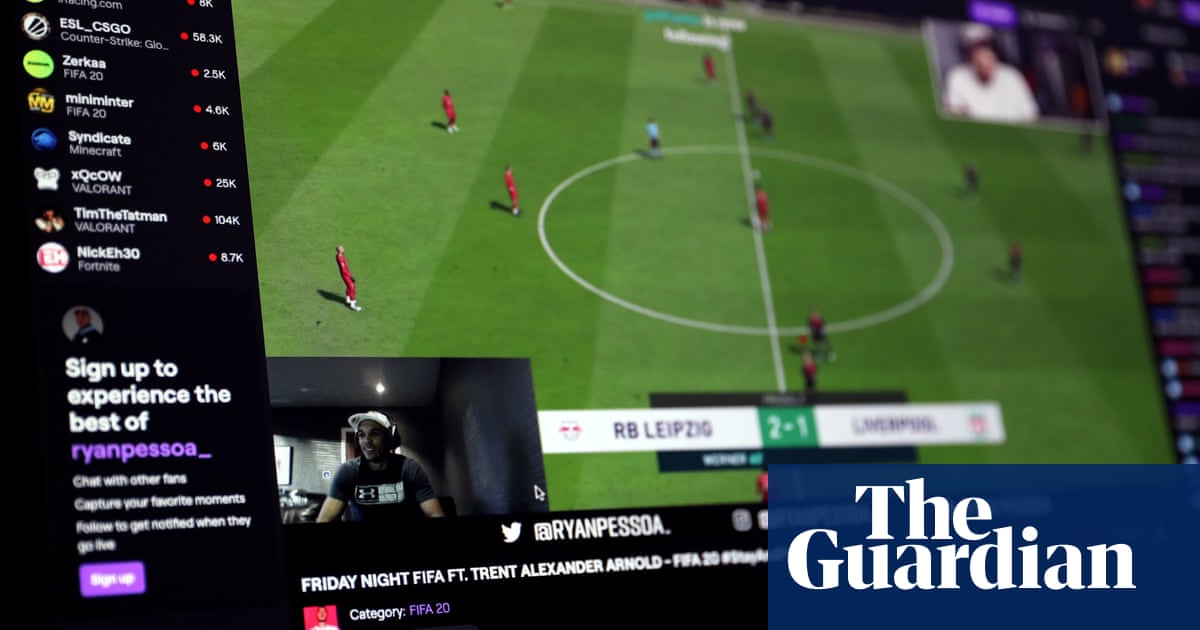 Esports and video games including ePremier League fill vacuum left by coronavirus.On Saturday afternoon, Sky Sports viewers will be treated to the semi-finals and final of a new football tournament, with an impressive array of players including Raheem Sterling, Trent Alexander-Arnold and Wilfried Zaha.
But the tournament, which is also being aired on BBC iPlayer, will be different to previous televised competitions.Due to Covid-19, it will be held in the Fifa 20 video game over two hours.
The ePremier League Invitational Tournament is a charity event, with selected footballers gaming to raise funds for the NHS (and occupy their time).
With the sporting calendar frozen around the world, this is the latest example of broadcasters turning to video games to fill slots in schedules that would previously have gone to more physical activities.
“We had been preparing for one of the biggest summers we’ve ever known,” says Ben Gallop, BBC Sport’s head of digital.“The usual stuff: the end of the Premier League, Wimbledon, the Opens, cricket, then Euro 2020, and the Tokyo Olympics.And then slowly, it dropped off one by one.
Facebook Twitter Pinterest Scott McLaughlin ‘driving’ a Ford Mustang in the Supercars All Stars Eseries on 22 April.Photograph: Clive Rose/Getty Images
“But there was a really strong audience need, even as events fell away.What really struck me is that our audience is still coming to us, to BBC Sport, even though there isn’t any live sport.

People are, across the country, in a pretty parlous state, and everyone needs what the BBC is able to provide: we inform and educate, but also we entertain.

We bring people together around the actual live events, and we wanted to carry on doing similar.”
The BBC is airing two other digital sports over the weekend: the fourth and fifth stages of the Digital Swiss 5, a gruelling 37km cycle race over a digital recreation of the Schallenberg mountain; and the first leg of the Formula E Race at Home Challenge, which sees real drivers from the electric race car league competing across eight digital recreations of real tracks.
Unlike Fifa, which is clearly a video game, these races are far closer to being digital recreations of the sports they are mimicking.The cyclists are riding their real bikes on turbo trainers, which mimic the resistance of a hill climb, while the racing drivers are using the same sort of simulation software that their teams use to tune up their cars before actual races.
Formula One , which has also launched an esports replacement, is using a game, F1 2020, that falls in the middle of the simulator-game spectrum.That can provide for entertaining crossovers between the virtual and real worlds, says Hazel Southwell, a motorsports journalist and esports fan.
Facebook Twitter Pinterest Swiss cyclist Fabian Lienhard of the Groupama-FDJ team during the first stage of the cycling race Digital Swiss 5 on 22 April.Photograph: Alexandra Wey/EPA
“There are two F1 drivers who were on a sim racing team in their spare time, and no one knew.

They’re two of the younger ones, and so little attention was paid that they joined an esports team.One of my friends was watching a virtual race and said, ‘I think that’s Max Verstappen.’”
The crossover with real sports is crucial for engaging audiences, says Gallop.With Fifa, for instance, “you’re seeing household names, in their own homes.You’re seeing their real competitive instincts – they’re dedicated to winning – and you’re seeing that tribal element of football.

I found myself strangely invested in watching Moussa Sissoko’s performance in the ePremier League, because I’m a Spurs fan.I was absolutely gutted when he was out of the running.”
If the drought of sports continues, Gallop suggests, the next step may be to look further into the world of esports.The fear is that, while airing an esports mainstay like the fantasy battle Dota or the football/racing hybrid Rocket League may bring younger audiences to the BBC, it could alienate those who don’t understand what’s going on.But, Southwell argues, people have a natural instinct to care about competition.
“We’ve all had that experience with the Winter Olympics of seeing something called, like, ‘downhill bell throwing’, where you tune in on day one to see what it is, and by the end of the Olympics you’re saying, ‘oh what a clanger’, when someone’s form is off.
“Well, a lot of the things that make esports good are the same things that make real sports good and watchable.”
Topics esports BBC Sky Motor sport Cycling Television industry Formula One news.