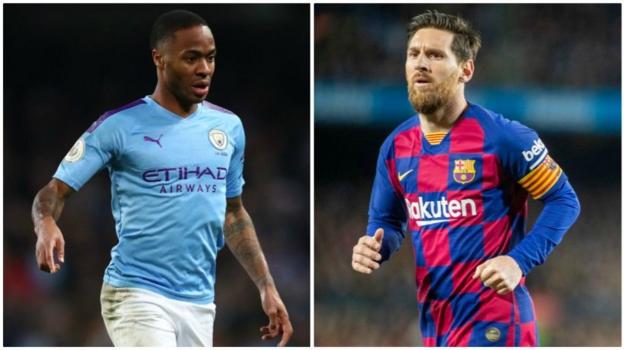 Manchester City forward Raheem Sterling will not be satisfied until he adds something else to his collection – a Lionel Messi shirt.
Despite already possessing dazzling array of football shirts, one belonging to the Barcelona star has proven elusive.
“There’s only one that I really want and that’s a Messi shirt,” Sterling said before his latest ePremier League Invitational tournament match against Everton’s Andre Gomes.
“When we played Barcelona I got a Neymar shirt.That was the first shirt I ever asked for.
“When I finish football and settle somewhere, I will hopefully have many shirts to choose from, pick my favourites and then I will do a room of trophies and football shirts.” Formula E esports to be broadcast on the BBC
Though a Messi shirt is number one on his wanted list, it was another Barcelona player who was Sterling’s inspiration as a youngster.
“Ronaldinho, he was the one,” Sterling told BBC Sport.“If you see my history on Youtube, I have seen every single clip of his playing career.
“I used to go into the garden and try to recreate what he’d done, but I couldn’t.I tried to the best to my ability.He was something special.”
With football likely to remain in shutdown for the foreseeable future, Sterling has been getting his football fix by pulling on a virtual Manchester City shirt and representing the club in ePremier League Invitational Fifa 20 tournament.
After seeing off Crystal Palace’s Wilfried Zaha , Sterling eased past Everton midfielder Gomes to set up a semi-final against Liverpool’s Trent Alexander-Arnold on Saturday.
But while Sterling’s success on the real grass had been down to those extras hard yards put in on the training pitch, his approach to the virtual game is a lot more relaxed.
“I’ve tried to stay off the console.I don’t want to keep thinking about the game.I know how to play Fifa,” he said.
“If you keep playing and keep thinking about it you’re just going to put more pressure on yourself.When the time comes I’ll be ready.”
When the season does resume, the final few games of the season are expected to be David Silva’s last in a City shirt.
The Spaniard is out of contract in the summer and he has been tipped to leave the club after a decade of service at Etihad Stadium.
Sterling says the 34-year-old is a shining example both for experienced players and youngsters.
“He is the most humble football player you will ever meet,” said Sterling.

“The trophies he has behind him to back it up too.
“It just shows when you go on to the next level and you’re doing all these wonderful things you can keep that humility about yourself and carry yourself in a decent way.
“If it is his last season he will be sorely missed because he has brought so much joy to the club.” Share this page .