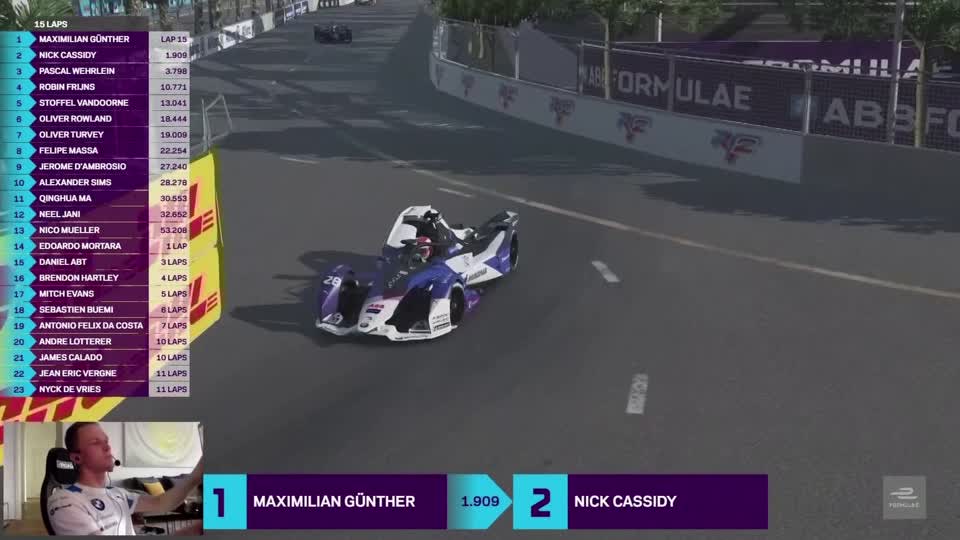 (SOUNDBITE) (English) SPLIT SCREEN OF PRESENTER AND BMW i ANDRETTI MOTORSPORT DRIVER AND RACE AT HOME CHALLENGE ROUND 1 WINNER, MAXILIAN GUENTHER, SAYING:
“Thank you very much, it was really nice to race, really happy to have this first victory and the 25 points.It wasn’t an easy race.I didn’t start from pole position and, yea, first two corners have been really tight and, yea, then I was in pursuit for the first few laps until Stoffel made a mistake I think.And yea, from there on I could control the race and secure the points, which is really great.”
STORY: BMW i Andretti driver Maximilian Guenther won the first round of the Formula E “Race at Home Challenge” around a virtual Hong Kong circuit on Saturday (April 25) as the all-electric series gave motorsport-starved fans some esports action.
It was the 22-year-old German’s second successive virtual victory after he won a test race around the Monaco street layout a week earlier.
New Zealander Nick Cassidy, a stand-in for Britain’s Sam Bird at Envision Virgin Racing, was second with German former F1 racer Pascal Wehrlein third for Mahindra.
Formula E is following other championships, such as Formula One and MotoGP, in using virtual racing to fill the void left by the COVID-19 pandemic which has brought sport to a standstill.
The all-electric series’ version, run over nine consecutive weekends and with all drivers competing from home, is also raising funds for the U.N.children’s fund UNICEF’s global coronavirus appeal.
Belgian driver Stoffel Vandoorne started on pole position for Mercedes but ended up fifth.
(Production: Stefan Haskins).