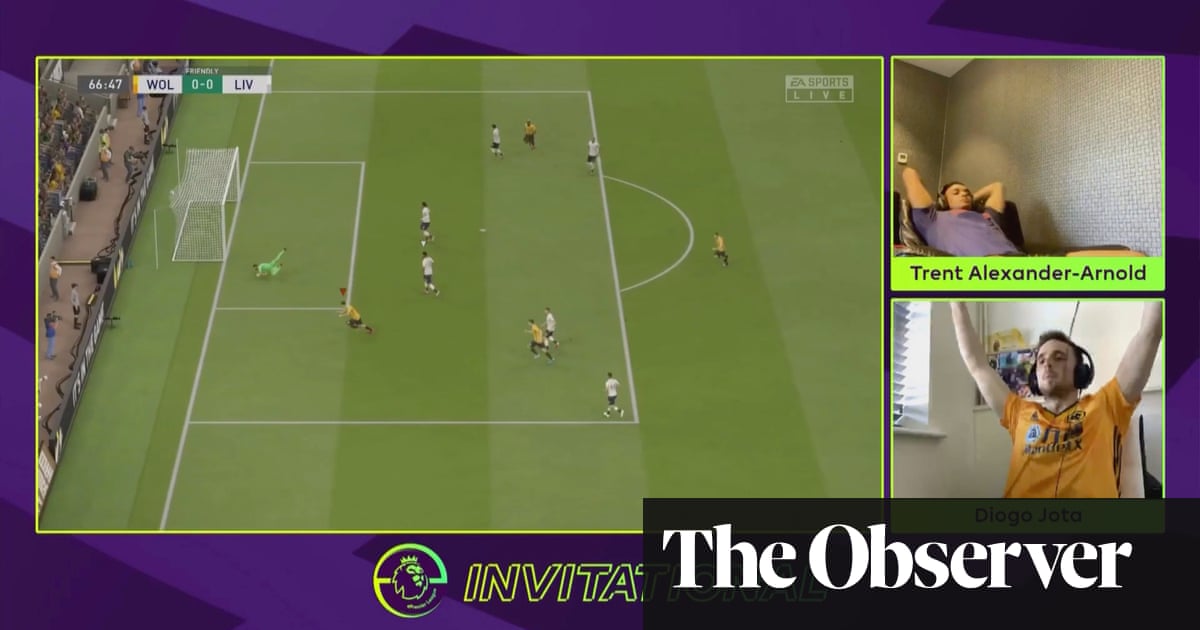 The Wolves man’s golden-goal win against Trent Alexander-Arnold kept Liverpool waiting for a title at the climax of a pound-shop version of MTV Cribs.I t was the least fitting of finals: after a tournament that had featured a net-busting 106 goals in just 18 matches when the best players met there were just two in the final, shared between Trent Alexander-Arnold and Diogo Jota, with the latter eventually winning after 68 impossibly tense, albeit sped-up minutes of golden-goal extra time.Still, after the events of the last few weeks the merest glimpse of the word “live” in the corner of a Sky Sports screen must have been enough to make action-starved fans quite emotional.
Esports ride crest of a wave as figures rocket during Covid-19 crisis | Scott Heinrich Read more
The fact that the games were being played on PlayStations was a drawback, but the action was almost frantic enough to make up for it and even if the goals were virtual they were created by actual footballers.The ePremier League Invitational started with 18 players and two celebrity hangers-on, and after four days of competition the decisive matches began at the nostalgia-inducing time of 3pm on a Saturday afternoon.
In purely sporting terms, while obviously being more console-reliant than ideal, the competition did not want for excitement and upsets.Form was fickle: Norwich’s Todd Cantwell was the pre-tournament favourite but he was thrashed 6-2 by Sheffield United’s Lys Mousset, who was in turn thumped 5-2 by pleasingly full-match-kitted Jota in the quarter-finals.
Chelsea’s Reece James was thrashed 8-0 by André Gomes in round two, with the Everton midfielder adding insult to insult by insisting afterwards: “I never play Fifa.Never.I didn’t touch the PlayStation until maybe one week ago.” Gomes went down 4-2 to Raheem Sterling in the next round, and Sterling then lost to Alexander-Arnold in a thrilling if lag-affected semi-final, the Liverpool player coming back from 2-0 down and riding quite a lot of luck to win 3-2 with another golden goal.
There was interest beyond the action, with the tournament doubling as a pound-shop MTV Cribs , a corner-shop Through the Keyhole , except filmed by extraordinarily short and completely static cameramen: you got a peek inside the homes of the rich and famous, but from an absolutely terrible and largely unchanging viewpoint.

Much of the décor we did manage to glimpse was unexceptional: Newcastle’s Christian Atsu was the epitome of this, providing a camera angle that afforded prime viewing only of his chin, with a completely bare, white wall behind.
This was probably wise, as any genuinely revealing decor was always likely to be seized upon by journalists desperate for things to be sarcastic about.

Burnley’s Dwight McNeil, for example, played in front of an arrangement of ragged-looking peacock feathers and a schmaltzy romantic art print in shades of brown, rust and ochre (the colours were such that an attempted image search returned thousands of photographs of laminate wood flooring), though as the 20-year-old still lives with his parents none of it was likely to be of his choosing.Elsewhere we learned that Leicester’s Wilfred Ndidi has one of his own shirts framed in his living room, that Tottenham’s Moussa Sissoko has a large photograph of himself on the wall, and that Everton’s Gomes owns a sofa with really astonishingly deep seats.
Sancho v Rashford on Fifa: Shutdown gives esports mainstream moment | Paul MacInnes Read more
His furniture would probably suit Alexander-Arnold , who in both the literal and metaphorical senses was the most laidback person in the competition.Before his quarter-final he was asked how he was feeling.“Quite relaxed, to be honest,” the Liverpool full-back replied.He wasn’t kidding: at this stage the only clue that he wasn’t actually unconscious was that his mouth was moving.Before the semi-finals he was at it again, executing some stretches that looked decidedly more waking-up than warming-up.
Sterling took precisely the opposite approach to the whole affair.

The most controversial moment of the tournament came in his earlier match against Wilfried Zaha, when he established a 4-3 lead with a goal that Zaha described as “disgusting” and “unacceptable”.“It’s all about winning,” fist-pumped Sterling.

“That’s the number-one rule when you go into a competition: do anything to win.”
Sadly Sterling couldn’t do anything to stop Alexander-Arnold, while Jota stormed through to a 4-1 semi-final win over McNeil.Perhaps a McNeil victory in that one would have been more appropriate – he and Alexander-Arnold should have met on Saturday afternoon anyway, given that Liverpool would have been playing Burnley at real-world football had coronavirus not intervened – but these are not ideal times and this was, all things considered, a pretty decent distraction from them.
Topics Premier League Sportblog esports Games Sports games features.