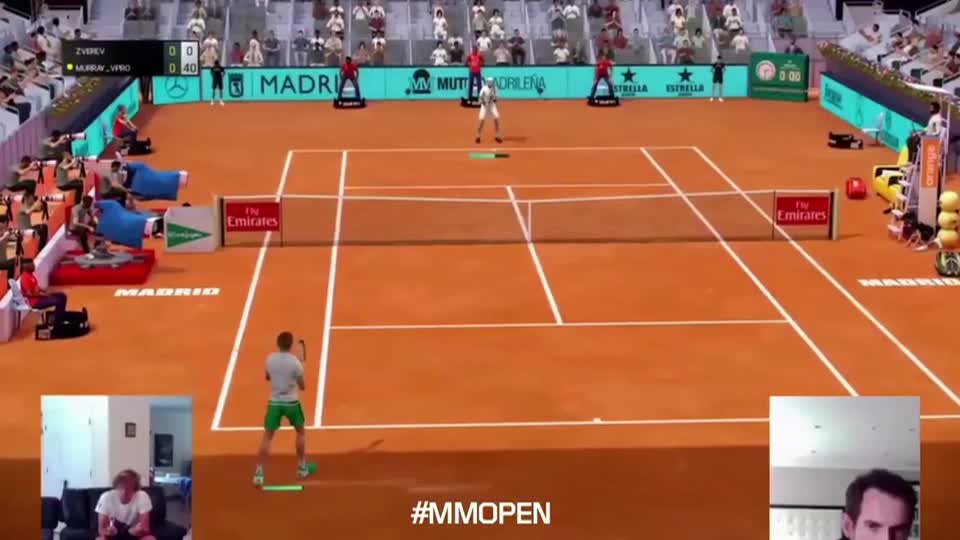 (SOUNDBITE) (English) TENNIS STAR ANDY MURRAY, SAYING:
“Yesterday or when I played Rafa, he was saying I had been practicing so much, today it was the controller was wrong with Zverev.Everyone has got all their kind of excuses, but the reason is that I’m just better than them.”
7.

VARIOUS RAFAEL NADAL BEATING YOUTUBER DJMARIIO
8.VARIOUS OF STEFANOS TSITSIPAS BEATING DAVID FERRER
9.VARIOUS OF KIKI BERTENS BEAT BELINDA BENCIC
STORY: Andy Murray showed there is nothing wrong with his competitive instincts as he brushed aside a swearing Alexander Zverev in an esports tennis match on Wednesday (April 29) and then said he was just “much better” than his fellow competitors.
The former world number one, who has seen his career stall after a hip injury, put his tongue firmly in his cheek after confirming he is the man to beat at the Madrid Open Virtual Pro, a money-raising gaming tournament, designed to fill in for the Madrid Open, which should have been taking place in Spain next month.
“Yesterday or when I played Rafa, he was saying I had been practicing so much, today it was the controller was wrong with Zverev.Everyone has got all there kind of excuses, but the reason is that I’m just better than them,” Murray said after thrasing Zverev from the comfort of his living room.
Elsewhere Rafael Nadal got a consolation win against Youtuber DJMariio, while there were also victories for Stefanos Tsitsipas and Kiki Bertens.
Sixteen men and 16 women are battling it out on a Manolo Santana Stadium that has been recreated in exquisite detail in the Tennis World Tour video game, designed by Nacon Gaming.
The two top players from each group of four will advance following a round robin.
Both the men’s and women’s winner will be awarded 150,000 euros ($162,000 dollars) of which they can choose to donate as much as they’d like to tennis peers struggling financially with the tour on standstill.
An additional 50,000 euros ($54,000 dollars) will be donated to the Madrid Food Bank.
(Production: Iain Axon and Stef Haskins).