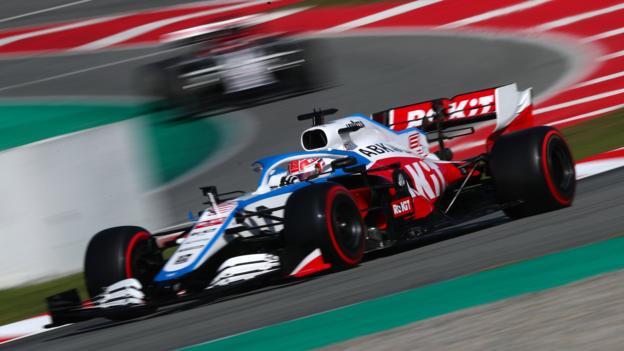 Formula 1 bosses have made a final offer to teams of a sliding scale budget cap reducing from $145m to $130m over the next three years.
The proposal is part of changes aimed at addressing the financial impact of the coronavirus in a letter to teams from F1 managing director Ross Brawn.
F1 has proposed a cap of $145m (£116m) in 2021, reducing to $140m in 2022 and $135m for the period 2023-25.
Teams will spend the coming days assessing the ideas before a vote.
The proposals – which also include a sliding scale of allowance for aerodynamic research according to a team’s success, and compensation for the manufacturer teams recognising the value of research and development of parts sold to customers – are billed as a final submission after weeks of negotiations ended in impasse last month.Vandoorne crashes off pole position twice in eventful esports weekend
A final decision on whether there will need to be a meeting of team bosses with FIA president Jean Todt, F1 chairman Chase Carey and Brawn, or simply a vote on the proposals, will be made once F1 has had feedback from the teams.What are the details?
The letter to team bosses lists a series of means by which F1 will cut costs in as fair a way as possible in the coming seasons.
A budget cap of $175m is already in the rules for 2021 but the coronavirus crisis will lead to a significant drop in income for F1, so bosses feel further changes need to be made.
In addition to reducing the level of the budget cap, two key proposals are those governing aerodynamic research and the “notional value” of customer parts.
One is aimed at levelling the field and the other at reflecting the value of the research and development resources invested by the big teams in parts they sell to others.
On aerodynamic research, there will be a defined benchmark amount of permitted wind-tunnel time and computing data, and a sliding scale of allowance of that data depending on a team’s finishing position in the previous championship.
The top three teams in a given year will be permitted only 70% of the total allowance, the team who finished fourth 80%, then 5% increments until the ninth and 10th-placed teams are allowed 105% and 110% of the total.
In short, that means the team who finished last will be allowed 40% more aerodynamic research the following year than the top three.
The “notional value” rule defines a valuation for parts typically bought by customer teams from manufacturers, such as gearboxes, suspension and so on.
Once a team has bought those parts, their defined value is taken off their total budget cap figure.Old adversaries: Ferrari want the budget cap to stay where it is, McLaren want it to go down Will the teams agree?
Ferrari has been leading opposition to reducing the budget cap below $150m, saying it causes problems for them in terms of the large numbers of redundancies it would require.
The Italian team declined to comment but is understood to be assessing the potential impact of the changes as outlined in the letter.
But the FIA has recently made a rule change that effectively makes Ferrari’s approval unnecessary.
Last month, its World Council approved a move to overturn the requirement for unanimous approval of competitors to amend rules at late notice.
A so-called “safeguard clause” has been added to the International Sporting Code so that only a majority is required.
The FIA said the change was needed “in view of the unparalleled Covid-19 crisis”.
That means that as long as five teams agree to the proposals, any objections will not necessarily stop them being adopted.

Is anything else in the letter?
The letter also confirms a number of other rules that have been widely discussed in public and agreed already.
These include:
• the delay in the introduction of the wide-ranging 2021 technical regulations until 2022.
• the requirement for teams to race their 2020 cars in 2021 as well.
• the possibility that the format of some race weekends will change to facilitate cramming in as many races as possible once the championship gets under way this season – for example by compressing the on-track action into two days.
• the budget cap will reduce or increase by $1m for each race that is removed or added to the calendar.So, next year for example, it will be $145m if there are 21 races, but $144m if there are 20 and $146m if there are 22.
• a cap on engine development costs, which Mercedes is pushing for, is to be discussed at a later date.Share this page.