HomeEsports‘Definitely not the real thing’: why eracers can’t go from the bedroom to the cockpit 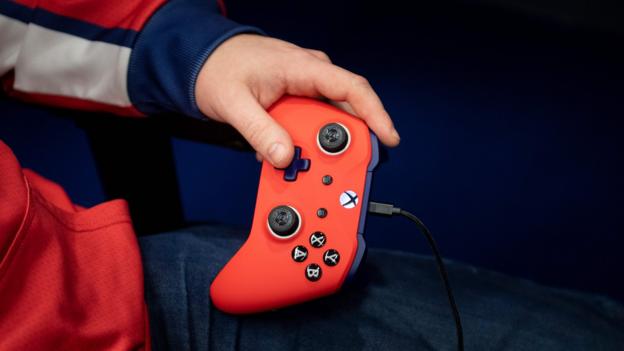 ‘Definitely not the real thing’: why eracers can’t go from the bedroom to the cockpit

No fear factor and no sense of speed?
For Williams driver Russell that day is unlikely to come anytime soon.
“For me it is like with the Fifa computer game and real-life football,” he told BBC Sport.
“The best Fifa player in the world would probably beat Lionel Messi on the game but put him on the football pitch and they wouldn’t stand a chance.”
So what are the main differences? In F1 and in virtual racing you are sat down with a track – be it real or on a computer screen – in front of you.
“The biggest difference is you don’t quite have that sense of speed or fear,” Russell added.
“Obviously when you drive at around 200 miles per hour around a track you know that if you make a mistake you can be in the wall and there can be big consequences whereas on a computer game you can hit restart and you go again.”
That sense of speed and the ability to cope with the threat of ever-present danger, Russell says, is something that would be difficult for an eracer to develop immediately if they were to jump into a real car.George Russell, left, and Alexander Albon are two of the current F1 drivers who have raced in esports
“Since I was seven I have known what speed feels like,” he added.
“That sense of speed and what it feels like to manoeuvre a car, your body just learns that.You build these senses over time.
“I know some of these top esport racers are doing simulator work for F1 teams and they are doing a good job but you need to have that feel when you get in a car and in a simulator you don’t have that sense of speed or feel the tyres.
“The tyres do definitely drop off during the race on the F1 game which is good because that is realistic but you just don’t have that feel.When you are in a real car you are feeling everything through your backside.” ‘Mind games and strategy the same as real life’
A sense of speed, fearlessness and being able to feel the car are certainly important qualities in an F1 driver but so too is racecraft.Quick reactions, an understanding of strategy and mental strength are all crucial to making it at the top and it is these qualities that an esports racer can be as good at, if not even better, than real drivers.
“I think getting in the right mindset for virtual racing is equally as important as in real life,” says YouTuber and sim racer Jimmy Broadbent, who beat Norris and fellow current F1 driver Nicholas Latifi to finish fourth in the Virtual Bahrain Grand Prix last month.
“If it gets in your head too much about who you’re up against then you don’t perform as well as you could.
“I think what’s not appreciated as much is that even when you’re sitting in your bedroom with a steering wheel that the mind games and strategy of racing virtually is just the same as in real life.”
An esports racer winning in real-life racing is also not unheard of.
Last year, Lucas di Grassi – a former F1 driver and Formula E world champion – was beaten by gamer Enzo Bonito at the Race of Champions.
Meanwhile, Britain’s Brendon Leigh, the inaugural Formula 1 Esports Series world champion, made the transition to real-life single seater racing last year and finished fourth in his first race at the BRSCC National Formula Ford 1600 at Snetterton, although a crash in his second race perhaps underlined Russell’s view that the jump from esports to motorsports is not an easy one.
But the talents of esport racers are becoming increasingly recognised and used by the top teams in Formula 1.
Since 2017, McLaren have ran the World’s Fastest Gamer competition.

The inaugural winner, Rudy van Buren, became an official simulator driver for the team, travelling the world and assisting then drivers Fernando Alonso and Stoffel Vandoorne in their preparations for race weekends.
“These top gamers in the F1 world are incredibly fast gamers and it is really impressive to see,” adds Russell.”I would definitely be interested to see how they would get on once in an F1 car.Media playback is not supported on this device Highlights: Max Gunther wins action-packed second Formula E Race At Home Challenge The crossover coming?
Seeing an esports racer in an F1 car may still be some time off, but the current pandemic and the turn to esports while the F1 season is on hold has certainly brought the two much closer together and those in the F1 world are certainly taking their virtual counterparts more seriously.
Norris recently called in one of his trusted former McLaren engineers to assist him in the virtual IndyCar race while Kenny Handkammer, a successful F1 engineer who helped Michael Schumacher and Vettel to a combined 13 world championships, is turning his expertise to esports.
Handkammer is now CEO of Fast Track – which hosts esports leagues and live race events – and he believes sim racing provides the ideal platform to both develop talented potential racers and tap into a new generation of motorsport fans that have possibly started to become disinterested with F1 in recent years.
“It is about engagement with the new generation,” Handkammer told BBC Sport.

“We know millennials have become disengaged with F1 recently so this is an opportunity to bring that audience back.
“We also want to make it more achievable for some people to get into a career in either motorsport or sim racing because both are financially rewarding career paths, but not everyone has the funds to start out in karting and continue on that path into real-life racing.
“Sim racing is cost effective and also much more accessible, you can race and practice any time while there are restrictions with karting with weather and limited time to be able to go and do it.
“This is an exciting time for esports.”
Additional reporting by Alex McLachlan Share this page.