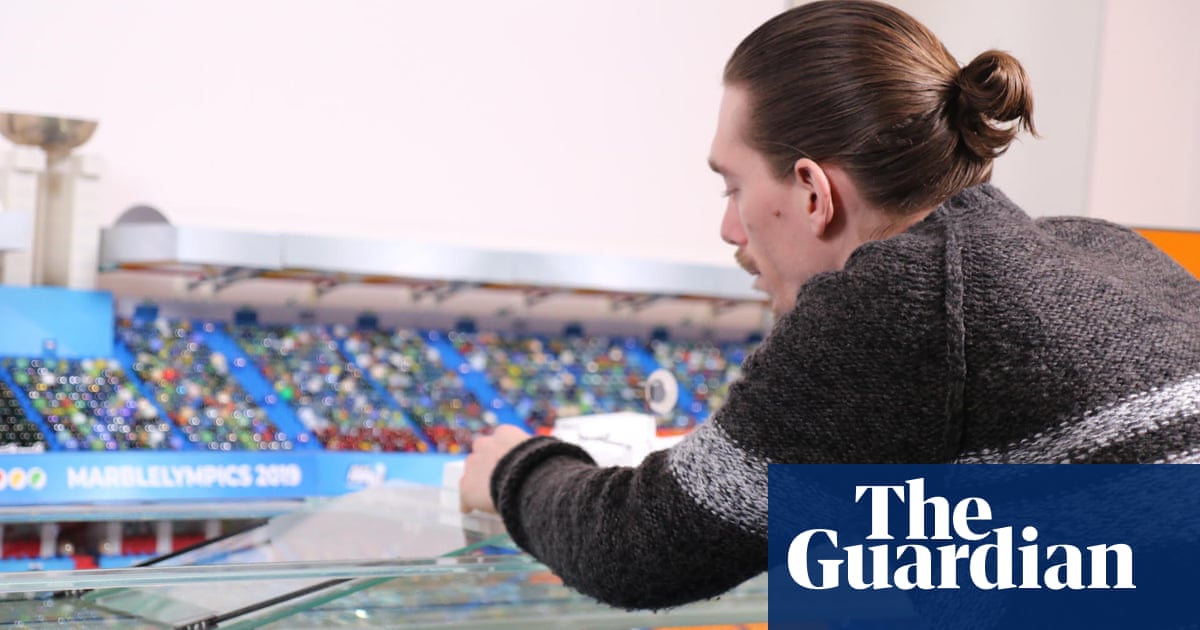 On the run: lack of sport drives fans to madcap world of marble racing | Technology | The Guardian

Lockdown has been good for Jelle’s Marble Runs, which has acquired more than 1m YouTube subscribers.“C an’t believe I watched this all the way to the end,” Gary Lineker tweeted early into Britain’s coronavirus crisis.“The lack of live sport is clearly getting to me.” He attached a 2-minute YouTube video in which a handful of marbles career down a twisting channel dug into sand, accompanied by a breathless commentary: “Marbles in the blocks … and they’re off!”

Once an unseen figure sets the marbles loose, there is no human interaction in the race, the positions of the coloured competitors decided purely by chance and the chicanes of the course.The early lead is taken by a light blue marble called Comet, until an unlucky collision knocks it back to fourth place.“And now Comet, just like that, fights back to the lead,” roars the commentary.The marble goes on to enjoy an emphatic win.

“Sod you, Lineker, you drew me in,” tweeted one follower.

“But you’re glad I did, aren’t you?” replied the TV presenter and former England footballer.

Welcome to the madcap world of competitive marble racing, which you might describe as a spoof sport were it not, to its growing number of fans, so very serious.

The sand rally was staged by Jelle’s Marble Runs , a YouTube channel that since 2006 has been run by a Dutch marble enthusiast, Jelle Bakker, and his older brother, Dion.

Beginning with relatively simple – if enormous – marble runs, they progressed to competitions, and now screen several elaborately staged events each year.These see teams of marbles, often having progressed through qualifying rounds, compete in sand racing rallies and motor racing-inspired contests called things like Marbula One .Later this month they will stage the Marble League , a multi-sport tournament inspired by – but no longer named after – a more familiar multi-sport event, after the International Olympic Committee objected to its original name of MarbleLympics.

Though marble racing’s popularity among fan communities has grown steadily in recent years, the global pandemic, as Dion notes wryly, “has been pretty good to us”.At the start of March, the JMR YouTube channel had fewer than 600,000 subscribers.That number is now more than 1.1 million and, he says, “I think we will jump to 2 million pretty soon.”

The past month has seen the sport make its TV debut on US network ESPN and attract the attention of the comedian John Oliver’s HBO show Last Week Tonight , which will financially sponsor the forthcoming Marble League in return for a few diminutive billboards placed among the event’s 10,000+ marble “spectators”.

The team will this week meet a major international TV producer who is interested in developing marble racing as a primetime TV format.After 20 years in youth work and child psychiatry, Dion quit his job three days ago, saying, “I just live from YouTube now.”

It was Jelle, now 37, who first began making marble runs as a four-year-old autistic child, helped by his brother, who is two years older.Jelle still builds all the tracks and stands for the races, though it is no longer a two-man operation.The commentator, Greg Woods, is American, their designer is based in Belgium, their composer in Greece, and a 15-strong committee scrutinises all times and results.“Yeah, we have to check everything really well,” says Dion, “because in America people are really living for it, and they see it as a real sport.” Merchandise sales for the competing teams, inevitably, are also booming.

How does he account for its appeal? The lack of any other sport has obviously been significant, he says, also pointing to the humour of the videos, which include stop-motion battles between competing marbles in the stands and marble streakers.

Fundamentally, Dion says, “It pulls you into another dimension.

Most people who watch it forget real life.Everything that has a competitive element – the human brain is just addicted to that.” He says 49% of viewers are now in the US, with the UK the fourth biggest audience after the Netherlands and Germany.“People are really rooting for one team.

It’s very cool to see and to experience.”