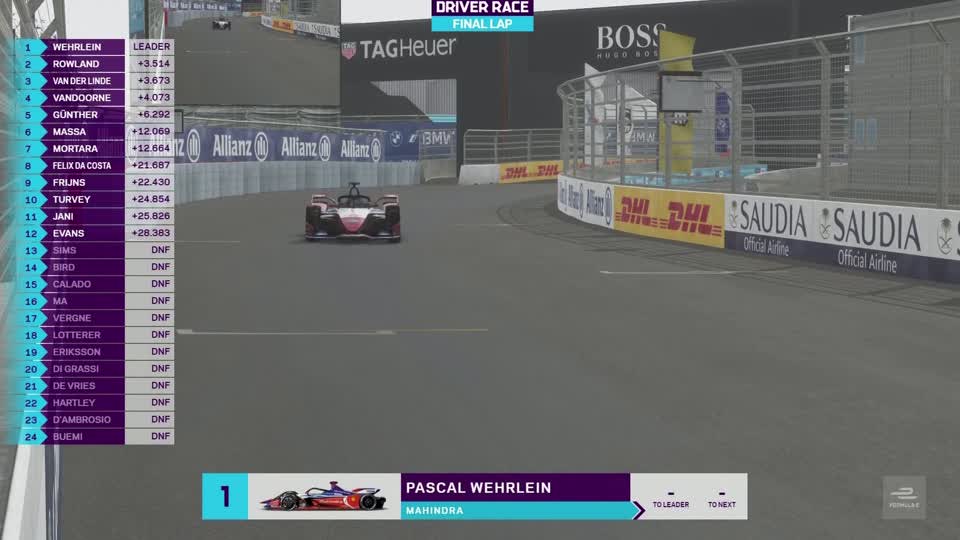 1.VARIOUS OF START OF RACE AND OPENING LAP WITH MAHINDRA DRIVER PASCAL WEHRLEIN TAKING THE LEAD

2.ON BOARD WITH MERCEDES-BENZ EQ DRIVER STOFFEL VANDOORNE

3.VARIOUS OF VANDOORNE OVERTAKING TWO DRIVERS BEFORE BEING OVERTAKEN BY ONE

REPLAY OF START OF RACE AS NISSAN E.DAMS DRIVER SEBASTIEN BUEMI BEING SPUN AROUND, CAUSING A PILE UP

6.VARIOUS OF WEHRLEIN CROSSING THE LINE FIRST TO WIN THE RACE

7.CARS AFTER THE RACE

“Yeah, it was a good race.I think it was one of the most difficult ones for me.I did a mistake in the beginning.I didn’t see the starting lights because of the halo.

I tried to switch the camera position, so, it changed to like TV position and then I couldn’t change it back anymore.So, the whole race I was driving with the wrong camera and it was really hard.Like, I was so happy I had a small gap and I could manage that gap.

Otherwise it would have been a very difficult race for me.”

The Mahindra driver led from pole position to go 12 points clear of Belgian Stoffel Vandoorne, who was fourth for Mercedes on the New York docklands layout.

The final round of the virtual all-electric season, around Berlin Tempelhof with all drivers racing from home on simulators, will be on Sunday (June 7) with double points available.

Abt parted company with Audi after getting a professional gamer to take his place in race five.

Former F1 driver Wehrlein revealed afterwards that he had been unable to see the start lights from his cockpit camera due to the halo and had switched to a different view which he then became stuck on for the whole race.

“It was a good race, but it was one of the most difficult ones for me,” said the 25-year-old.

Britain’s Alice Powell will race in Sunday’s grand final, the only woman in the line-up, in place of Robin Frijns at Envision Virgin Racing.