HomeEsportsLeague of Legends esports: Everything you need to know about the UK League Championship on the BBC 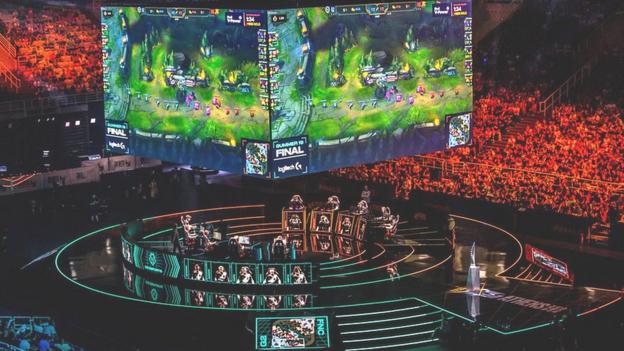 League of Legends esports: Everything you need to know about the UK League Championship on the BBC

Read more about sharing.The UK League Championship (UKLC) League of Legends competition is coming to the BBC, with some of the best esports players in the country fighting it out for a share of a £20,000 prize.

Eight teams will compete in a round-robin tournament over the next seven weeks to try and make it to the end-of-season playoffs, and you can watch each match of the competition on BBC iPlayer and the BBC Sport website from Sunday 14 June until Monday 27 July.

With so much action in the pipeline, you will need to get up to speed on everything UKLC before the competition kicks off…The League of Legends European Championship Summer Split 2019 finals were hosted in Athens League of Legends

League of Legends is one of the most popular video games in the world, with millions of monthly players.

Two teams of five compete on a map that has three lanes, to try and destroy the enemy’s base.In order to do that they will have to kill minions controlled by artificial intelligence and enemy players to increase their power, then destroy the towers outside the base before they can finally make their way to the Nexus, the building that needs to be demolished to win.

Players control one champion – or champ – which is selected at the start of the game and cannot be changed.Different champions fulfil different roles, and selecting the right group of champions is key to performing well.

This is done in the ‘pick and ban’ phase before the match begins, and involves a lot of strategy and mind games between teams as they try to figure out what their opponents will pick, then counter them.

A single game of League of Legends can last anywhere from 20 minutes to over an hour in extreme cases; most, however, end around the 30-40 minute mark.

The massive success of the game has led it to be the biggest esport in the world, with major leagues across the globe and an annual world championship that almost always breaks viewership records for esports – the 2019 edition attracted total views in excess of 137m (excluding streaming platforms in China).

Previous events have been held in locations such as Wembley Arena in London and The Birds Nest Olympic Stadium in Beijing.

In Europe, the top league is the Legends European Championship (LEC), a franchised league of 10 teams that compete in two splits per year, with the very top teams going on to compete at the world championships.A similar league, the Legends Championship Series (LCS), operates in North America with other non-franchised regional leagues based around the world.The UKLC

Organised by DreamHack and the game publisher Riot Games, the UKLC features eight of the top UK teams, six of which were directly invited to the competition and two that made it through a qualifying event.

The eight teams will play each other twice during the seven-week regular season, with the top four teams advancing to the end-of-season playoffs.Each team will play two matches every week, one on a Sunday and another on a Monday, with the first match of each play day kicking off at 18:00 BST.

The top two teams from the UKLC will have the opportunity to reach the Northern League of Legends Championship (NLC), the second tier of League of Legends esports in Europe – sitting just behind the LEC – and from there the aim is to qualify for the EU Masters.

The BBC will begin live streaming coverage of the NLC, from Tuesday 30 June.What to look out for

In the UKLC there are quite a few recognisable teams, including the academy teams of many organisations that play in the NLC and other competitions.

MnM Gaming Academy and Barrage Esports Academy have been around for years while Munster Rugby Academy is the second League of Legends team from the famous Rugby club, with their top team also competing in the NLC.

These rosters should be the breeding ground for new talent that could go up to the main rosters of these organisations, so keep an eye out for the next star.

More experienced League of Legends fans should also keep an eye out for some unusual strategies and team compositions, as the UK has a history of coming up with some more out-of-the-box strategies.

In the very top leagues, you can see very similar strategies battling against each other in every match, but in the UKLC it isn’t unusual to see something entirely new or rarely seen, which makes the action even more entertaining.

Week one fixtures and when you can watch them (times subject to change if matches overrun) NVision Esports v Demise.