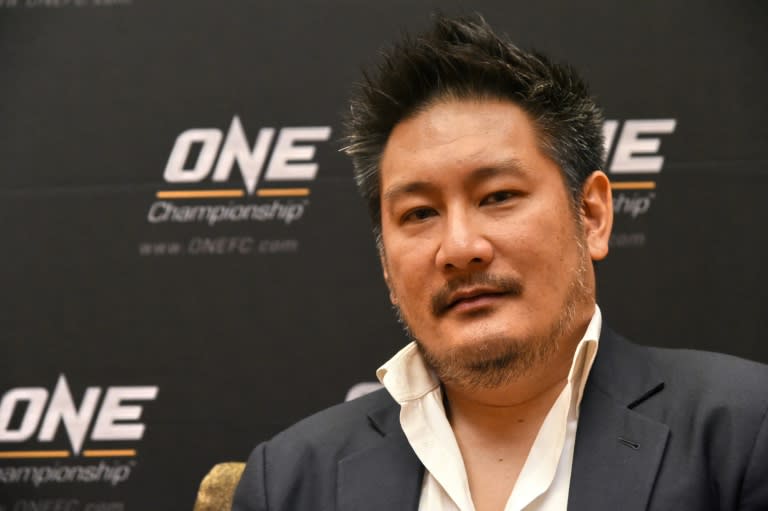 1 / 2 One Championship puts on fight cards throughout Asia Asia’s largest mixed martial arts promotion, One Championship, could resume putting on fights as early as next month, its CEO told AFP on Monday, as he warned of rocky operating conditions ahead after the coronavirus.

Chatri Sityodtong was speaking as the Singapore-based company slashed 20 percent of its workforce but also announced a $70 million funding boost from institutional investors.

He said One, which promotes cards across Asia in mixed martial arts, Muay Thai and kickboxing, was planning fight nights next month in China, Thailand and Singapore, depending on lockdown measures.

With coronavirus laying waste to professional sports worldwide, One’s last event was in Singapore in late February, and it had to cancel a series of events in April and May.

“Of course, this environment has made it trickier to operate but I’m always an optimist, and I believe that where there’s a will, there’s a way,” Chatri said by phone from Singapore.

“We are looking at next month already.Nothing has been announced formally, but I can tell you that we are working very hard to come back,” he added.

Chatri did not disclose the size of One’s now-reduced global workforce, but the company’s LinkedIn profile put the headcount at between 201-500 employees.

He said the job cuts in “non-essential” areas were necessary to insulate the company against an expected economic downturn, despite the $70 million cash injection.

“Extraordinary times require very unusual prudence to protect the company and the longevity of many years to come,” Chatri said.

“Our operating assumption is that the global economy will continue to suffer over the next 24 months, and potentially enter the worst global recession in history,” he added.

“And so we want to be prepared, under all scenarios, with a lean organisation with a big war chest.”

Chatri said the extra funding had come from existing backers as well as a new institutional investor — a “$20 billion fund” from the United States whose identity will be revealed in the coming weeks.

“I’m very grateful for this big vote of confidence, you know, in the middle of the worst global economic crisis in 100 years,” he said.

“I’m just very, very excited and inspired to return back with live events this summer, and start doing what we always do.”

Chatri said One was “in talks with every major Asian government to bring back our events online”.One Hero fights, feeder events for the main championship, will also be held in Shanghai on June 20 and 21, he said.

The US-based Ultimate Fighting Championship on May 10 became one of the first sports to restart post-coronavirus.

UFC has so far successfully put on six shows in tightly controlled environments under COVID-19 testing protocols in Jacksonville, Florida, and Las Vegas.

One Championship also has eSports and reality TV interests, Chatri said, as well as its “crown jewel” of stadium fights..