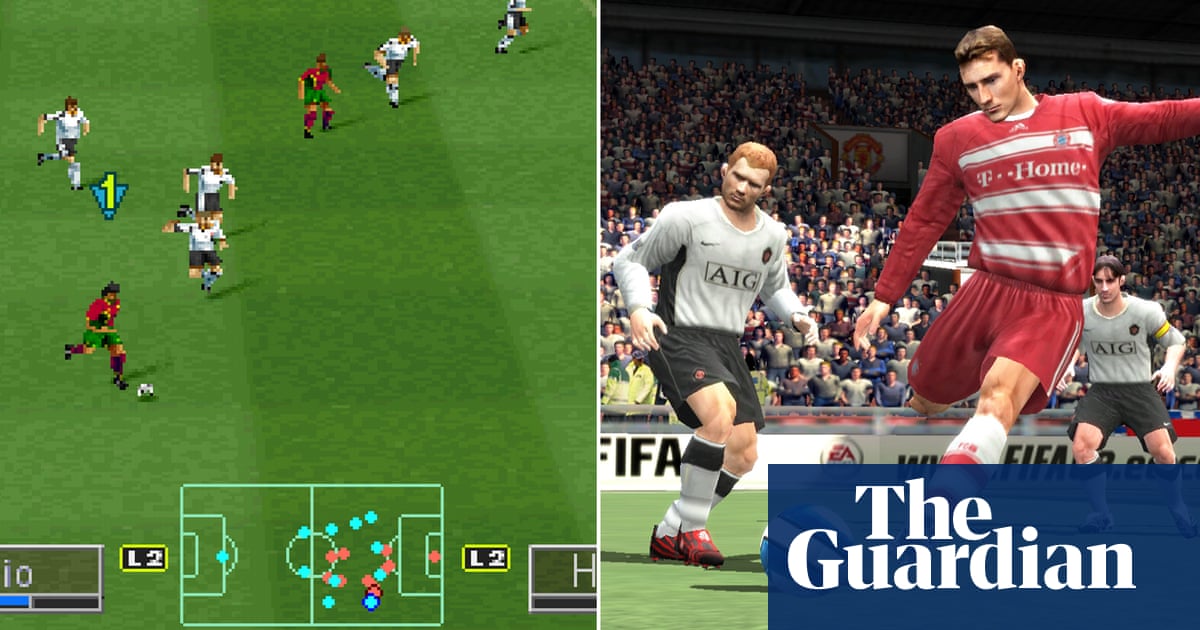 The football games’ 25-year turf war has been an exciting match.But will the next generation of consoles be the final whistle for PES? Game changers …International Superstar Soccer Pro and Fifa 08.Composite: Konami, Electronic Arts Game changers …

It was the latest shot in a turf war going back 25 years.When Fifa International Soccer launched on Mega Drive in December 1993, its competitors were already beginning to look old-fashioned.Contemporary hits Kick Off 2 and Sensible Soccer both adopted an overhead view and lacked any kind of big-league sponsorship.But Fifa was a flashy newcomer, designed for the 16-bit console era, and within a month it had sold 500,000 copies.

Critics and football fans loved its isometric viewpoint, realistic animations, end-to-end action and spectacular bicycle kicks.“The word ‘classic’ is used too much,” wrote Mean Machines Sega magazine, awarding it 94%, “but anyone who plays Fifa Soccer must concede that this IS football.” Fifa producer Matt Webster was surprised by the success, and concedes that although EA had an official licence, the original game wasn’t quite as accurate as later iterations.

“While we had an agreement with Fifa to use their name and logo, there wasn’t a way we could utilise real names,” he says.“We had to create fictitious names for thousands of players.I couldn’t help but drop myself in there as an England forward.The reception was way beyond our expectations.” Lead designer Bruce McMillan felt more confident: “I wasn’t shocked.

I knew we had a hit on our hands.Fifa became the standard for graphics, audio and gameplay.” Indeed it did.Future Sensible Soccer releases avoided console, and rivals such as Gremlin Interactive’s Actua Soccer series couldn’t match Fifa for technology or gameplay.

For four years it remained the darling of critics and fans alike.Seen as the plucky underdog …Pro Evolution Soccer 2019.

Photograph: Konami The game-changer was 1997’s International Superstar Soccer Pro – follow-up to the well-received early PlayStation kickabout, Goal Storm, and namesake of 1994 SNES title International Superstar Soccer.Developed by Konami Tokyo with a new 3D graphics engine, it sought to challenge Fifa by offering an organic, improvisational experience rather than something tightly structured around specific moves and tactics.Where its rival encouraged fast, thrilling goal-fests, ISS slowed things down, rewarding patient approach play and crisp passing, facilitated by a groundbreaking approach to tactical variety.The game included nine in-match strategy options such as zone press and overlap, emphasising the idea of simulation over arcade-style action.Plus its side-on visual presentation looked beautiful.“So smooth you forget this is a video game and actually feel like you’re participating in a real match,” cooed Absolute PlayStation .Three subsequent PS1 games widened the quality gap.During this time, PES became legendary for its made-up names: Roberto Larcos, Naldorinho, Batustita, but it didn’t matter that England lined up with Bekham and Skoles supplying Owenn and Sheerer.

The key was the intricacy with which they did so.Konami’s titles rewarded patience, and the genuine pace – such as that demonstrated by France forward Hanry – felt scintillating.“The series was always about gameplay,” says Steve Merrett, Konami’s PR mastermind from 2001 to 2018.“Even those earliest Tokyo-developed titles focused on control, with the blocky characters perhaps lacking the finesse of the EA game but offering a more flowing experience.

Players were recognisable.The Gazza in Konami’s English team had his peroxide hair.With the engine in place, each entry became a matter of refinement.” “The best football game on any console – ever,” insisted Eurogamer in 2001 as Pro Evolution Soccer landed on PlayStation 2.While that game scored 9/10, Fifa 2002 picked up 8/10, bolstered by 400 teams with correct strips and badges.

“From PES 2 to PES 5, you knew you’d succeeded when you’d demo the game to a magazine, and a few days later the journo would gripe that they couldn’t go back to the old version,” says Merrett.‘Ballsy or flukey’ …Pierluigi Collina on the cover of Pro Evolution Soccer 3.Photograph: Konami Konami grew so confident it plonked referee Pierluigi Collina on the cover of PES 3.“We could do anything at that point,” says Merrett.“Collina was well known, it was an iconic image and different from the familiar white EA covers with a stock picture of Michael Owen or David Ginola.I wasn’t involved in the planning, but with hindsight it was either ballsy or flukey! Let’s say the former.” Even EA’s employees were wowed by their rivals’ excellence.

“PES was a massive influence in the beginning,” says Gary Paterson, who became Fifa lead designer in October 2005.“I don’t think there was another sports game that created such varied, emergent, emotive gameplay back then.I loved it.” Paterson combined the lessons learned from PES with his own instincts, which had landed him a promotion from Fifa manager.“I was focused on creating logical systems that reflected what I knew of football, and that would generate the range of outcomes necessary for a dynamic experience – where no two games would be the same.We improved the sophistication of the ball physics and rewrote how the goalkeeper saved the ball … I also focused on replacing random elements with probability curves, based on context.” Fifa 07 sold a million copies more than Fifa 06, and earned encouraging reviews.

“Fifa 07 plays a quite different game of soccer to its predecessor, though initially it can be difficult to figure out exactly what has changed,” wrote Gamespot , vindicating Paterson’s substance-over-style realignment.

Paterson felt it was critical that this momentum carried over to PS3.“After Fifa 08 we didn’t really look towards PES.We had so much we wanted to do.We spoke a lot about the shooting system, a more sophisticated version of what we’d created on PS2.The designers would talk about how the challenge is not to pass the ball once, but 15 times in order to create space for a shot.” Better poised for next-gen gaming …

Fifa 19.Photograph: Electronic Arts In response, PES floundered.“EA copied everything that was good about old PES and implemented it in Fifa,” says Merrett.“PES started to focus on the wrong elements.

It went too mad for players that resembled their real-life counterparts, and motion-capture was front and centre.This was the tail wagging the dog.The engine was creaking, and responsiveness went out in favour of realism.” PES 2009 sold 6.9m copies compared to Fifa 09’s 8.7m.Six years later that fissure had become a gulf: 1.7m sales for PES 2015, versus Fifa 15’s 18m.One mode made the difference.Ultimate Team debuted as a £7.99 download for Fifa 09, enabling the collection of Panini-style digital cards to form an elite fantasy squad.“The journey of finding players you’d never usually consider and building connections was incredibly exciting,” reflects 12-year Fifa stalwart Adam Shaikh, now creative director of Fifa Ultimate Team.Yet those astonishing sales numbers have come at a cost, with accusations that its loot box pack-openings constitute gambling.

Shaikh admits the pot-shots sting.“We build Ultimate Team to be as entertaining as possible.Luckily, we know that many of our gamers feel we build great games, given how much they play Fifa.

It can absolutely be disheartening to hear feedback we believe misrepresents us as a team, whether that’s a focus on micro-transactions or other criticisms.

The happiness of our fans is a huge motivator.We listen to criticism, as much of it can be helpful in improving what we do – but it needs to be constructive.” Often forgotten amid the Ultimate Team debate are significant recent innovations, such as Fifa 16’s debut of female international teams.

Surprisingly, Konami countered by taking on EA’s licensing might.It captured exclusive rights to Barcelona’s Camp Nou stadium, Brazilian and Russian leagues, and – most famously – Juventus, leading to Cristiano Ronaldo’s team being renamed Piemonte Calcio in Fifa 20.This bold tactic felt at odds with the culture of early-2000s Pro Evo, where users would happily compensate for the lack of real names and kits by utilising comprehensive edit modes to swap “option files”.Worldwide sales of 550,000 for PES 2019 – compared to Fifa 19’s 12.2m – suggest the approach has failed, and it’s tough to see where Konami turns on PS5 and Xbox Series X.A 2017 FIFA Ultimate Team regional final.

The mode has become a staple element of the series.Photograph: BT Sport Asim Tanvir, whose devotion to PES scored him a job as Konami’s social media manager from 2016 to 2019, offers hope.“A new engine is key.The current mix of the Fox Engine and rusty code is holding the game back where it used to excel.Forget spending big on licences.

Go back to three pillars that made the series so popular: responsive gameplay, realistic AI and engaging modes.Give frustrated Fifa players a genuine alternative, rather than a cheap side dish.” As for next-gen Fifa, Ultimate Team and eSports are inevitable priorities – yet Paterson hopes fundamentals are retooled, too.“I’d love to see another step forward in animation, the likes of which we saw with PS3 – where it brought greater authenticity and gameplay possibilities.It’s such a big factor in immersion, and creating what we called ‘the emotion of scoring’.” PES will always be revered as the plucky underdog who often outplayed its rival using intricate, pretty football.Yet even amid Ultimate Team controversy, it’s Fifa that looks better poised for next-gen.McMillan, its creator, feels this was always the natural pecking order.

“Konami had a good product, but it was not Fifa.There are other search engines on the internet, but there is only one Google.Fifa endured because the core original fire never burned out.” Topics.