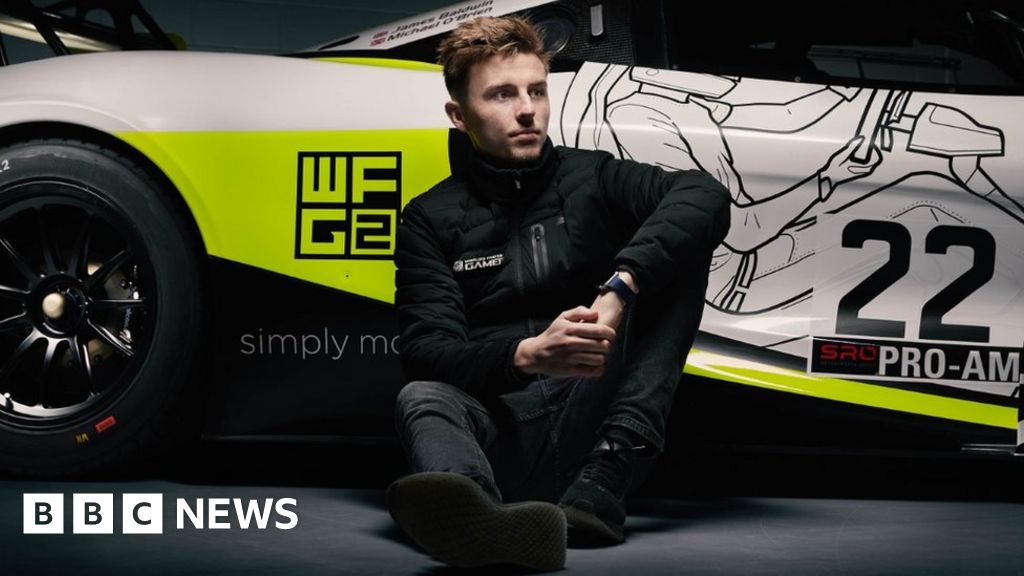 From the world’s fastest gamer to real life racer

A world far away from traditional go-karting that you might do at a mate’s birthday party, it’s a serious, expensive business; and the first step on the road to Formula 1 for the likes of Lewis Hamilton.

James, who was captivated my motorsport from the age of four, was no different.He raced karts but dropped out of the sport aged 16 because of a lack of funds.

He thought his motorsport career was over before it had even properly begun.

“I went into engineering and had no racing of any kind in my life,” James tells Radio 1 Newsbeat.

“But I think two years after I dropped out of racing, I was in PC World with my girlfriend.

“I remember it so vividly.

“We saw a simulator rig with a wheel and pedals on it on sale for about 250 quid and I was like, ‘oh that’s cool.’ So I bought it.

“At the time racing esports hadn’t really boomed at all so I didn’t have a clue about it.It was more of a casual thing.

“That was kind of where it led on from.” ‘The dream was back on’

James spent about a year as a casual gamer until finishing in the top 10 of one event won him an all-expenses-paid trip to Austria to compete for a cash prize.

“I took my girlfriend and I was like ‘what, this is crazy!’”

“I was completely out of my comfort zone,” James recalls.

“But it was cool.It felt like the dream of being a driver of some kind was back on which was quite a weird feeling.”

Continued success led to more travel and an invitation to compete for one of the biggest trophies, and coolest titles, in esports.The World’s Fastest Gamer.

“The competition was in West Coast California, and consisted of real driving, simulator driving, physical fitness tests, and media training, all over the space of two weeks.

“It came to a judge’s decision where they announced the winner and the judges were pretty cool.

“Juan Pablo Montoya was one of them and Rubens Barrichello was a coach (both ex Formula 1 drivers and multiple race winners).It was a very unique and special competition.”

World’s Fastest Gamer is now in its third season and looking for new competitors.

It was hugely competitive, but James says the key to what’s turned out to be a career-defining win, was remembering to have fun.

“It was very intense.

Two weeks when you’re on your own in America, it feels quite long.It was definitely a pressure cooker.

“But it was really enjoyable.I think a lot of the finalists forgot that they were out there to enjoy it at the same time.

“It was a once in a lifetime thing.They kind of got too fixated on doing well and I think they lost that enjoyment.” The one million dollar prize

Image copyright Torque Esports Image caption If you thought the title of world’s fastest gamer was cool, the prize might just top it

The World’s Fastest Gamer prize was a million dollar drive in a real life sports racer, known as GT car.

If that wasn’t good enough, it was with the team owned by Jenson Button, 2009 Formula 1 champion and British racing legend.

But, like so many things across the world, that’s on hold for now because of the coronavirus pandemic.

Instead James will be doing not one, but six races in the British GT Championship , starting this weekend, at iconic British tracks like Brands Hatch, Donnington Park and Silverstone.

The circuits are famous for a reason.

“If you go off, you’re probably going to hit something, so it’s quite risky,” James says.

“And the GT is quite a big step up, so it’s going to be insane.”

Racing is far more physical than many realise.

The drivers have to be super fit as their bodies are put under intense pressure and high G-forces.

“The brake pedal is the biggest difference.It requires a lot of force to get that down.

“If you crash, you’ve got financial implications and you could get injured.

In esports you can push and if you crash, it’s not going to matter.

“It’s just the immersion in a real car.You can smell things that you probably don’t smell in sim.

“The heat is really hot in a race, it takes you by surprise when you first get in the real car.” ‘If the goal isn’t audacious then what’s the point?’

The six British GT races represent a real chance for James to prove he has what it takes for a long career in real life racing.

“I’ve been waiting for this for a very long time, the opportunity to race in a big scale event.

I didn’t think it would come if I’m being brutally honest, so I’m not going to sit at home feeling scared.

“My ultimate ambition is to be one of the best racing drivers in the world.

“My goal is quite audacious, but I think if it’s not audacious, then there’s no point really doing it.

“I’ve always wanted to be a racing driver and I’ve got the opportunity to do that.So I’m going to make the most of it.”