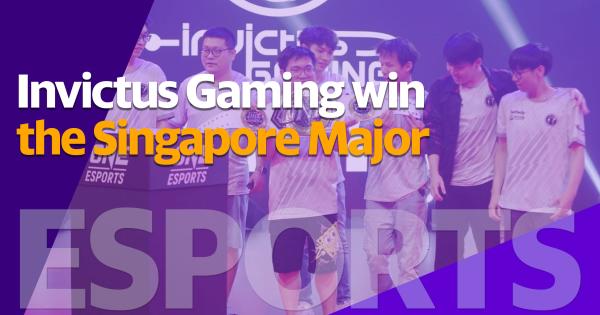 Chinese team Invictus Gaming (IG) came from 2-0 down against North American team Evil Geniuses (EG) to take the series 2-3, completing an amazing comeback at the ONE Esports Singapore Major's grand finals on Sunday (4 April).IG had started the tournament in the playoffs stage, after topping the China regional Dota Pro Circuit League.They had originally lost to EG in the second round of the playoffs, dropping to the lower bracket.There, they overcame dark horses Thunder Predator from South America, tournament favourites Team Secret of Europe, and fellow Chinese team PSG.LGD to book their second encounter with EG in the Singapore Major.It had looked like EG would take the whole series 3-0, but a few mistakes in game 3 allowed IG to come back into the match and they forced error after error from EG, giving them another chance in game 4 where they managed a superior draft, leading to game 5 where they completed the comeback and reverse sweep against their North American rivals..