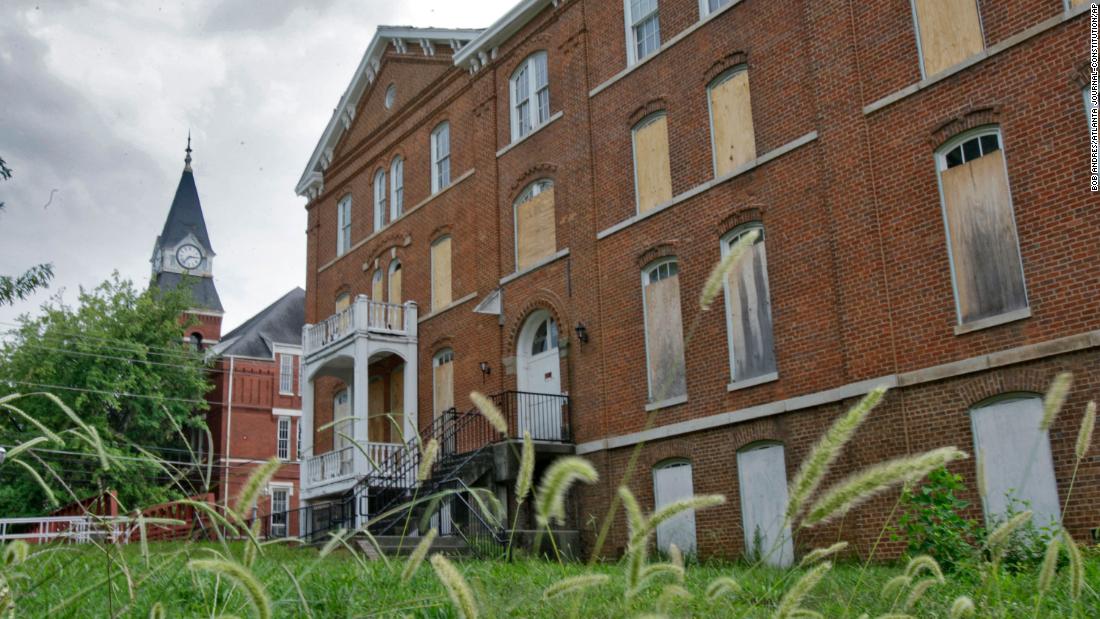 (CNN) It is no secret that at some point, something went very wrong at Morris Brown College.It was a disappointing, though not unfamiliar story.A school with a dedicated faculty and loyal students had run into financial challenges that eventually made it impossible to operate.

On April 13, the historically Black college in Atlanta became an official candidate to regain accreditation, an accomplishment 20 years in the making.The school’s accreditation was revoked in 2002 due to debt and financial mismanagement .For smaller HBCUs that have struggled with enrollment and finances, Morris Brown’s evolution in recent years may demonstrate that there’s light at the end of the tunnel for schools on the brink.Rebranding and lobbying for private support create the opportunity for these historic schools to come back stronger than they were before.Fountain Hall at Morris Brown College is seen in this undated photo from the US Library of Congress.The college is currently working to renovate the 139-year-old building.

Fountain Hall housed W.E.B.Du Bois’ office, where he wrote his seminal work, The Souls of Black Folk (1903).”Despite enrolling roughly 300,000 students each year nationwide, HBCUs have faced significant funding challenges with some even forced to close their doors,” said former Sen.Doug Jones , a Democrat from Alabama whose state is home to 15 HBCUs.”These schools provide a path for so many first-generation college students, many of whom come from under-served backgrounds.” In 2018, higher education institutions received a total of $149 billion from federal sources.Those funds affected more than 3,000 schools and roughly 15 million undergraduates.

In that same year, the Department of Education announced a list of eight private HBCUs granted federal loan deferment with a $10 million appropriation.

Read More This better equipped the schools — many of which had a total enrollment under 3,000 — to direct money through three main vehicles: federal student aid, grants, and contracts.With its new accreditation, Morris Brown will now be eligible for such privileges.Accreditation means a new start After losing its accreditation in 2002, the once-flourishing college lost most of its enrollment.The number of students fell from about 2,000 to less than 50.The college never closed but held on by a thread.

Faced with mounting debt and a crumbling infrastructure, the college’s board of trustees offered the administration an option: shutter their doors for good.The grounds could theoretically be converted into a museum or a site for private development, but its days as an active college appeared to be ended.Kevin James, the current president of Morris Brown, disagreed.He believed there was still a chance to regain accreditation, and evolve as an operational campus.

James was named interim president in early 2019 and officially made president in May 2020.He immediately focused on what he has labeled “the hard reset” for the college.”We will continue working to obtain accreditation, ensure financial stability, build a strong relationship with alumni, and grow enrollment through The Hard Reset,” James said in a statement when he was named president.James and the efforts of the university’s administration paid off.On April 13, Morris Brown officially received accreditation candidacy by the Transnational Association of Christian Colleges and Schools (TRACS), a Virginia-based accreditation agency recognized by the US Department of Education.Alonzo Herndon Stadium, Morris Brown’s former football stadium, lies abandoned this 2015 photo.

According to TRACS, accreditation candidacy means that the institution is in basic compliance with the standards and criteria of TRACS and has been evaluated by an on-site peer team that found the institution provides sound instruction and student services.Candidacy indicates that an institution appears to have the potential to achieve accreditation within the prescribed five-year period, according to TRACS, but does not guarantee the institution will become accredited.Reaccreditation means that Morris Brown is once again eligible to apply for federal education funding that could go toward student financial aid and Pell Grants or on-campus housing so long as the college remains compliant with federal conditions and standards.For private historically Black colleges like Morris Brown, gifts, grants, and contracts make up a smaller percentage of overall revenue for relative to their non-HBCU counterparts — 17% vs.25% — according to the American Council on Education.Within both public and private sectors, HBCU endowments lag behind those of non-HBCUs by at least 70%, according to the council.

The lower level of private funding makes HBCU’s more dependent on federal education funding.The unique role of HBCUs It has been a big year for HBCU visibility.Graduates of historically Black colleges and universities now sit at the highest seats of government and private industry in record numbers.Georgia Sen.Raphael Warnock has regularly credited his academic foundation and civic commitment to his time at Morehouse College, another member of the Atlanta University Center (AUC) and a historic “brother school” of Morris Brown’s.”I went to Morehouse College on a ‘full faith’ scholarship.

I didn’t know how I would pay for it but I graduated college, earned a Ph.D.degree,” he said in a campaign ad.Students like Warnock, Brown tells CNN, are precisely who Morris Brown College is designed for.”Historically, students who have been coming here over these unaccredited years, they’ve come because we’re a family,” James explains.”Our classes are not really like a teacher to a student is really more like a mentor to a mentee.” Gaines Hall is boarded up on the Morris Brown College campus in this August 2012 file photo.In the years after Morris Brown lost accreditation in 2002, enrollment ranged from between 30 and 50 students.

Due to the school’s unique circumstances, these students were able to participate in very small class sizes, often just three to five people.

For those who need more attentive and nurturing care, though, this could be a benefit.”With us, you get more hands on hand instruction, you get more flexibility with the instructor regarding, help with assignments and all those kinds of things,” James said.Like other AUC members, Spelman College , Morehouse School of Medicine, and Clark Atlanta University , Morris Brown was originally founded as a private, coeducational, liberal arts college engaged in teaching, humanities, and public.In the years since its founding in 1881, administrations have tried to maintain a competitive, nurturing space where African American students can gain skills needed to enter the workplace.James sees this time as a fresh start.When classes resume this fall — in person classes, at that — incoming students will be among the first to experience the college’s new academic programs, which have been rewritten from top to bottom.Campus services are also evolving to better accommodate a more digitally connected student body.

Among the college’s newest degree programs are hospitality management, global management and applied leadership, and even a first-of-its-kind esports performance program.Morris Brown will be the only school in Georgia that offers an esports major.In fulfillment of its mission as an institution of higher education, the school’s president says he and others are guided by the college’s motto: “God Our Father, Christ Our Redeemer, the Holy Spirit Our Comforter, Humankind Our Family.” “We remain committed to excellence and truth.This is only the beginning,” James said..