HomeEsportsHow do the American owners who tried to rip the heart out of football come back from this? 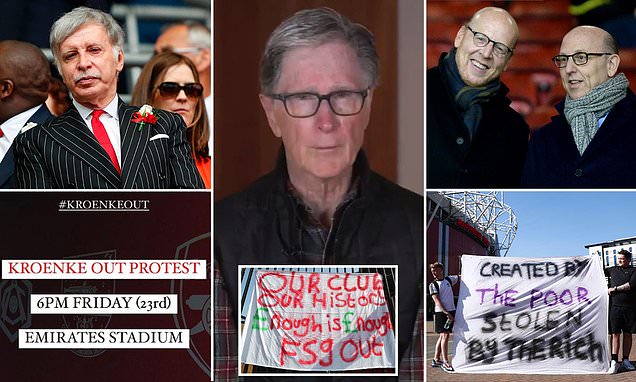 How do the American owners who tried to rip the heart out of football come back from this?

Never underestimate the power of a crowd.It’s staggering how John Henry, the Glazers and Stan Kroenke managed to get it so wrong.Liverpool chief Henry was the first to front up on Wednesday morning with a grovelling apology after sitting quiet for two days and watching his manager Jurgen Klopp having to face the music for a decision that wasn’t his to defend.At Manchester United , much-maligned chief executive Ed Woodward has outlined his plan to leave the club by the end of the year.

Is he falling on his sword, or is he walking out on principle? He has been so business orientated at United that fans can be forgiven for assuming it is the former.The Glazers’ apology came after.

And at Arsenal , Kroenke’s silence goes on – his name wasn’t on the club apology – but the fan fury will continue to escalate even though the Super League has crumbled.Sportsmail assesses the lie of the land for the three chiefs, and where they go from here with their credibility in ruins.

The 71-year-old owner of Liverpool, has an estimated wealth of $2.8bn.Like the Glazer family and Kroenke, when you’re worth billions you tend to get more decisions right than wrong.

But like Graeme Souness said on Sky on Tuesday night – when you’re at that level of business, you tend to think a few steps ahead and even have an exit plan.’You can bet certain Americans were looking at this (the Super League plan), [thinking] we’ll remain in this new league for two years, our assets will double in value and we’ll get out and we’ll move onto something else,’ Souness said.’This wasn’t an idea someone had a fortnight ago, this has obviously been on the go for months and months and months.’ If Henry really does listen to Liverpool fans, like he said in his apology, then he’ll still be recoiling at the reaction from Anfield fanbase, who draped banners outside the stadium calling for his FSG group to sell up.’Ticket prices, furloughing staff, trying to trademark the city name, now this.This isn’t an accident, when it comes to trying to bleed the game dry your policy is to ask for forgiveness, not permission.

Not this time, it’s a bridge too far.Sell up,’ read one scathing reply on the club’s tweet of Henry’s message.Another said: ‘Words are cheap.He says everything they do is to improve their club.’The only reason they wanted to be in Super League was to make the club value go up and for them to get richer.

None of that new revenue would have reduced ticket costs and games would have gone abroad.’ Speaking before Henry said sorry, Souness said he thinks that time is up for Henry.

‘I know the scousers, they will not forgive John Henry for this.I can’t see how he gets back from this, I honestly can’t,’ he said.Henry implied in his apology note that he has no plans to depart, saying ‘we’ve worked hard to improve your club – our work isn’t done.’ It’s too early to tell when it would be right for Henry to show his face at Anfield again, once fans are back inside the stadium.And while that is a shame for him, he only has himself to blame.No Liverpool fan can say that the club haven’t improved hugely under FSG’s ownership.They’ve won a sixth European Cup/Champions League and they’ve snapped a 30-year wait for a championship by winning the Premier League last season.They’ve appointed a manager in Jurgen Klopp who is adored by one of the most ardent fanbases on the planet and Klopp has built a team held in even higher esteem.

Klopp had always spoken out against a Super League and warned of its dangers.He has every right to be dismayed at the position the clubs owners put him in on Monday when he had to face the cameras around the game with Leeds while Henry stayed silent.Owners should never take centre stage but given the success they’ve had, things could – and things should – be so much easier for Henry at Liverpool than they are.The Spion Kop group who removed their flags from Anfield in light of the Super League news announced on Wednesday that they will be returned after Liverpool withdrew from the proposals.On FSG, they said: ‘Your continued wrong decisions and lack of consultation with the fans in these big decisions has been your ultimate downfall.Once again you have gone toe to toe with the wrong people and your delay in making a statement is cowardly.This is OUR club, not yours – never take us for granted because once again you have seen that it’s the fans who have the power, not the men with the briefcase.’ It is worth stating too that despite Henry’s reckless decision making here, there could be a feeling of ‘better the devil you know’ among some of the Liverpool fanbase.

After all, he bought the club from the hated Tom Hicks and George Gillet, who threatened to drive Liverpool into the ground.The club were facing administration before FSG stepped in.But Liverpool supporters who think it is in the best interests for FSG to cling on would admit that the route back is a long one here, if it even exists at all.Arsenal’s Kroenke has been involved with the Gunners since 2007 and took complete control three years ago.The billionaire, 73, also owns NFL team LA Rams, NBA’s Denver Nuggets, NHL’s Colorado Avalanche and the Colorado Rapids from the MLS.

He also has the Colorado Mammoth team in the National Lacrosse League and, since 2017 has been involved in esports, owning teams in leagues for the video games Overwatch and Call of Duty.Unlike Henry at Liverpool, Kroenke’s ownership has coincided with what at best can be described as a plateau in the fortunes of the Arsenal first team.Slowly they slipped out of the top four and last season reached the Europa League thanks to Mikel Arteta steering the club to FA Cup glory in his first few months in the job.Make no mistake, after this week Arsenal fans have had enough and want him gone.Ian Wright summed up the mood of Gunners fans on Tuesday with a simple tweet reading ‘#KroenkeOut’.Arsenal Fan TV said on Wednesday morning that despite the club’s withdrawal from the Super League, there will be a ‘Kroenke Out’ protest outside the Emirates on Friday at 6pm.Gunners fans across social media were sharing home-made fliers to encourage as big a turnout as possible.’Is this how far we have fallen? We are getting into competitions to the detriment of the English game because we aren’t good enough to get into them?’ Wright raged in an emotional video he posted on Twitter on Monday.

‘They (owners) announced it to us at like quarter-to-11 – are they catering for us? They don’t care about us, what’s going on in England.

Our clubs are English by name only and it is a real shame what has happened.It makes me very sad.Fans see straight through it.’ Martha Silcott, a member of the Arsenal Supporters Trust, told Sportsmail: ‘I pleaded to Arsenal to at least show an ounce of respect for fans by being the first of the big six to say “we made an error”.

‘People talk about Arsenal and class, a word often used about my football club.They put it down the toilet and they need to get it back.It is a very distressing time.Blokes in suits have an idea of their own benefit but when push comes to shove they don’t do it.’ Kroenke’s relationship with Arsenal fans has been a stormy one, with supporters of the north London club accusing him before now of ignoring them by not investing money in the team.

Despite his involvement in sports watched by millions Kroenke prefers to avoid the spotlight and has the nickname ‘Silent Stan.’ Gunners supporters have protested against him many times before but Friday could be the biggest yet.Florida-based Joel Glazer, 50, is part of the family who have controlled Manchester United since 2005, when it was bought by the now late businessman Malcolm Glazer.The family also own the NFL team the Tampa Bay Buccaneers – the recent Super Bowl Champions.United have not won the Premier League since 2013 but during their tenure have lifted 12 major prizes and, according to Deloitte, in 2021 are the world’s fourth richest club behind Barcelona, Real Madrid and Bayern Munich with revenue of $580m.The Glazers’ money comes from their sporting empires and real estate across the US.They bought the Buccaneers for $192m in 1995 and it is now worth $3.1billion.The team, led by legendary quarterback Tom Brady, beat the New England Patriots in the most recent Super Bowl.Likewise they took charge of United, according to Forbes, for $1.4bn with the club reported to be worth more than $3bn.

But looking ahead Gary Neville, as he so often does, struck the note that speaks for United fans in his explosive appearance on Monday Night Football earlier this week.Yes, the Glazers have got to go – but who can afford to get them out? ‘I believe in a free market, and I’ve always thought ‘what’s the answer to the Glazers? Who takes them out? Russia, China, state money for the £2-3billion it would need?’ Neville said.Perhaps the names mentioned are even less enticing than the Glazer family.’They have stepped over the mark.They are scavengers and need booting out of this football club and booting out of this country.’ But Neville perhaps made the most salient point when he honed in on Joel Glazer and how significant he felt it was that he had put his name on the statements issued by all founder clubs regarding the Super League.’He doesn’t put his name on anything, that man,’ Neville said.

‘They’ve been through hell at Manchester United in the early years.They don’t care, and when I saw his name on it, I was really worried.’ It’s hard not to feel as if that could be the overriding factor here – the Glazers don’t care about being disliked.There was never any warmth shown to them, they’ve only been disliked since they bought the club in 2005.They’re used to it.But the level of hatred aimed at them is really quite something.’There is not one Utd fan anywhere who would want these leeches to remain after Woodward leaves,’ one United fan said on Twitter.’They have shown their treacherous hand to the world of football and the FA/Prem League should never allow people like these into any football club ownership again.

#Glazersout’.Another said: ‘Don’t let them use Ed Woodward as the fall guy for this and get away with it.’He was a huge part of the problem and helped them on their way but was ultimately no more than a puppet for them.

The Glazers are 100% behind this.#GlazersOut’.Glazer put his name to a new note to United fans on Wednesday, apologising ‘unreservedly’ for the club’s Super League role.’We got it wrong, and we want to show that we can put things right,’ Glazer said.

‘Although the wounds are raw and I understand that it will take time for the scars to heal, I am personally committed to rebuilding trust with our fans and learning from the message you delivered with such conviction.’This is the world’s greatest football club and we apologise unreservedly for the unrest caused during these past few days.It is important for us to put that right.’ Quite how much trust there was to rebuild to begin with is debatable..