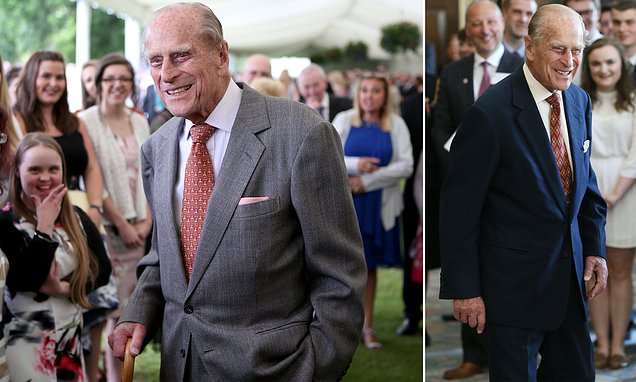 Young people taking part in the Duke of Edinburgh Awards could go on ‘urban expeditions’ or play computer games amid plans to boost numbers by the year 2026.The awards were set up in 1956 by Prince Philip and it has since spread to more than 140 countries with millions of people taking part.Ruth Marvel, its chief executive, now wants to expand it in the UK and has targeted reaching one million young people, up from its current 300,000.Among its plans to attract new participants is to add urban expeditions to where the Brixton riots happened and the introduction of esports, according to The Times .Marvel said: ‘Investing that money in young people is longerlasting …I think [that is what the duke would have wanted].

‘His passion was to extend the award to as many as possible, especially the disadvantaged.’We have seen more children pushed into poverty as a result of the pandemic.’ A new fund to help a million more young people achieve a Duke of Edinburgh’s Award, known as the Living Legacy Fund has been launched since his death.It will aim to give youngsters in the UK from wide ranging backgrounds the chance to complete a DofE Award over the next five years.The money will help to establish new centres, train thousands of more leaders and volunteers and provide targeted help to young people who need specialist support to complete their award, the DofE Award charity said.

DofE chief executive Ruth Marvel said it has been ‘an overwhelming and emotional experience’ to have heard from thousands of people, from teenagers to politicians, presenters to sports stars, sharing such powerful stories about the difference DofE has made to their lives.She said: ‘We want to make sure every young person – whatever their background, ability or income – can develop the self-belief, skills and confidence to take on whatever life throws their way.

And ensure that no young person faces barriers to starting or achieving their DofE Award.’ Last week it was announced Commemorative £5 coins could be issued to fund a statue of Prince Philip or even new Royal Yacht Britannia under Treasury plans.Ministers are said to be considering minting the ‘crowns’ following the death of the Duke of Edinburgh who passed away aged 99 at Windsor Castle last week.Vice Chairman of the 1922 Committee Sir Charles Walker told the Telegraph: ‘I can think of few better ways of celebrating the Duke of Edinburgh’s full and wonderful life than the issuance of a special memorial coin.’If the Royal Mint did this, there would be a large number of people – myself included – who would want to own one of these coins as well as buying one for children and grandchildren.’ A petition calling for a statue to Prince Philip following his death aged 99 has been signed by thousands of people.Save Our Statues launched a change.org campaign calling on Boris Johnson to erect a monument to the Duke of Edinburgh in London.The page has been signed more than 10,000 times since it was set up and heartbroken signatories left tributes to the Queen’s husband.

Prince Philip was 34 when he first conceived the idea of a scheme to help bridge the gap between formal education and national service.Inspired – or, as Philip put it, ‘pestered’ – by his headmaster at Gordonstoun school, Kurt Hahn, he worked to set up a challenge that allowed young men to make the best use of their free time and the Duke of Edinburgh ‘s award scheme (DofE) was born.Now, 65 years on, more than 6.7million young men and women have participated in DofE programmes in the UK and achieved 3.1million awards.

It is now offered in more than 140 countries.The scheme is arguably the duke’s greatest legacy, having helped young people learn new skills, confidence and resilience – improving their life chances and employability.But it did not receive such a warm reception when he first mooted the idea, with the then minister of education Sir David Eccles commenting: ‘I hear you’re trying to invent something like the Hitler Youth.’ Nevertheless, the concept got off the ground in February 1956 and after the first year 7,000 boys had started a DofE programme and 1,000 awards had been achieved.By the second year, other small-scale pilots were launched overseas and a programme for girls had been set up.Hahn, a German Jew who fled the Nazis, was a huge influence on Philip’s life.In 1934 he established Gordonstoun, the Scottish private school.Philip, who had moved to the UK from Germany, was one of his first pupils.

At Gordonstoun, the boys rose at 6.30am for a cold shower and a run.Hahn, who died in 1974, had been concerned with the ‘decline of modern youth’ and pinpointed antidotes, such as fitness training, expeditions and projects.His motto was ‘There is more in you than you think’ and it was a philosophy that would leave a lasting impression on the young prince – and one that still resonates with the awards today.It takes six months each to complete the bronze and silver awards, and 12 months for the gold.It is open to everyone aged 14 to 24.Nowadays, there are four main sections of a DofE programme – volunteering, physical, skills and expedition.For gold, participants also complete a residential section.

The awards have moved with the times and include activities such as vlogging, kite-surfing and DJing alongside traditional pursuits such as bell-ringing and cross stitch.Awards are achieved through schools, colleges, universities, youth clubs, businesses, housing associations and even in young offender institutions.Heathrow and British Gas are among the companies which deliver the scheme to their young employees.Research has found those who complete an award are more likely to be retained by the organisation and promoted.The intake of 2019/20 saw record-breaking numbers of young people start the DofE scheme, with 295,490 entering the programme, up 2.6 per cent.

Of those, 72,577 came from disadvantaged backgrounds.A record 159,051 awards were presented.

Among those to achieve the award in previous years is the Duchess of Cambridge, who won her gold while at Marlborough College.Dame Kelly Holmes got a silver award, while footballer Kevin Keegan and Olympian Tessa Sanderson achieved bronze.Other notable alumni include singer Katherine Jenkins, actress Ashley Jensen and adventurer Ben Fogle.Anyone who achieves a gold award is invited to a presentation attended by a member of the Royal Family.The duke himself attended more than 500 ceremonies.Prince Philip’s youngest son, Edward, Earl of Wessex, has taken over as patron..