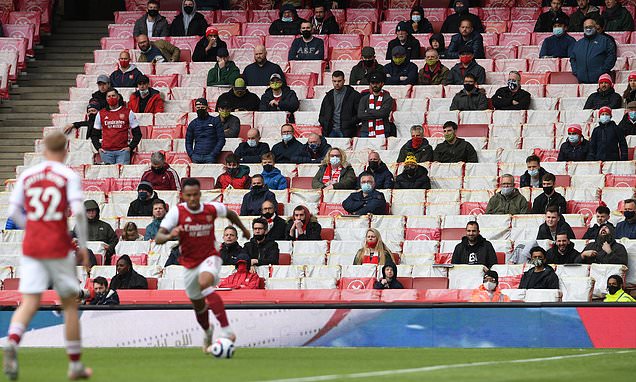 There has not been much for Arsenal fans to celebrate in recent times, so the promise of a price-freeze on season tickets provided much-needed cheer.But while at first glance the Gunners appear to have honoured the promise, supporters have been left fuming.They point out that while prices remain the same, the lack of European football means they will get 21 games (19 league matches and two FA Cup ties) as opposed to the 26 they were guaranteed when the team were good enough to qualify for continental competition.‘It’s over a grand for 21 games, which doesn’t sound like a price freeze to me,’ one fan pointed out.Arsenal say that because Europa League matches were at the lower end of the price structure, they are right to say prices have been frozen.PFA boss quits Manchester New Professional Footballers’ Association boss Maheta Molango is certainly going about things in his own way.The shock choice to replace Gordon Taylor took up his position earlier this month, and has already surprised some by deciding that he will work from the Manchester-based trade union’s London office, close to Monument station.Around 50 staff work in Manchester, where the organisation was founded, with 10 to 15 in London and fewer still in a satellite office at St George’s Park.

The view is that Swiss-born Molango will be tasked with improving the PFA’s commercial output, so London seems the obvious choice.You’re axed…but have a very happy birthday Good of British Athletics to wish Charlotte Purdue a happy birthday on their Instagram account.This is the marathon runner left to seek legal advice after she failed to make the cut for the Olympics.Purdue, 30, lost out to Steph Twell despite her PB of 2hr 25min 38sec in London in 2019 being faster than Twell’s best of 2:26.40.She claimed ‘false information’ over her fitness was presented at a UK Athletics selection meeting and subsequently lost an appeal against a decision which left senior figures ‘aghast’ at the omission of one of GB’s best marathon runners.

Still, happy birthday, Charlotte.No ‘moral dilemma’ for the BBC at the Euros This column reported the debate within the BBC last week over how many staff to send to Tokyo for the Olympics, as bosses grapple with a ‘moral dilemma’.It appears the same approach has not been taken with the European Championship.Those in Baku to cover Wales have noted the broadcaster has more than 20 staff in the Azerbaijani capital.

The merry band is covering Wales for BBC Sport, BBC News, radio and S4C.PFA contact Alan Judge over action after Ipswich exit The PFA have contacted ex-Ipswich midfielder Alan Judge to see if he wants to take action over his acrimonious departure from Portman Road.

Judge was informed in April he would not play for the club again due to a clause in his contract triggering an extra year had he made one more start, after playing 29 of Ipswich’s League One games.The 32-year-old was not involved in the final six games and left this summer when his contract expired.The PFA want to see if there was any wrongdoing or employment breach by Ipswich.Media U-turn on travelling to Japan with UK on red list Japan putting the UK on their red list – meaning arrivals in the country must quarantine for six days – is perhaps the latest example of the hosts’ attempting to put the world’s media off travelling to Tokyo for the Olympics.

It appears to be having the desired effect, with many who have booked flights and hotels now questioning the logic of their trips.Talent drain at BBC Sport continues The drain of talent from BBC Sport continues with the departure of editor of sports newsgathering Jon Buckley.Buckley, poached by BBC News, is a respected operator with a desire to see his department break stories.It is to be hoped his successor is of a similar ilk, and not part of the ludicrous craze that has brought cage fighting, eSports and childish banter to the broadcaster.

Social media pages key for top-flight scouts There were knowing looks at Premier League clubs following the unearthing of historical, offensive tweets from England cricketers.For more than 12 months, social media has been a key part of scouting reports among the big six and beyond.

Scouts sift tweets and Instagram posts of potential targets and flag anything that could be viewed as questionable, with the advice that the posts be deleted should the player sign.Firm charges broadcasters £5k to film on Wembley approach Quintain, the opportunistic development firm that owns what was formerly Wembley Way, is charging broadcasters £5,000 to film on the iconic approach throughout the tournament.The shrewd move has not gone down well, although some – including ITV Sport and the BBC – have decided to stump up the cash because coverage from the shadow of the Arch will form a key part of their match build-ups.The firm waxed lyrical about what a great deal this was when contacted by Sports Agenda, pointing out the fee includes a ‘dedicated security team, crowd and health and safety management and b-roll of recent aerial footage’.St George’s Park’s local airfield causes problems The FA deserve credit for the media facilities at St George’s Park, with giant screens, work desks, separate interview tents for rights-holders and a pop-up cafe.

But one thing they cannot control are the skies above.Tatenhill Airfield, half a mile away, remains operational and is causing problems.Last week, one pilot performed noisy loop-the-loops while Jordan Henderson was being interviewed – which wreaked havoc with subsequent transcription attempts.Venkatesham claims he was in the dark over Super League The stories following the car crash that was the European Super League breakaway continue to amaze.Sources say that Arsenal chief executive Vinai Venkatesham – who called the other 14 Premier League clubs to apologise for the Gunners’ role in the doomed project – also suggested he had been left in the dark over the plans in a US-led operation.

Arsenal, however, say he was merely pointing out that the club were not the drivers or authors of the botched scheme..