HomeEsportsEsports Movers and Shakers in June 2021 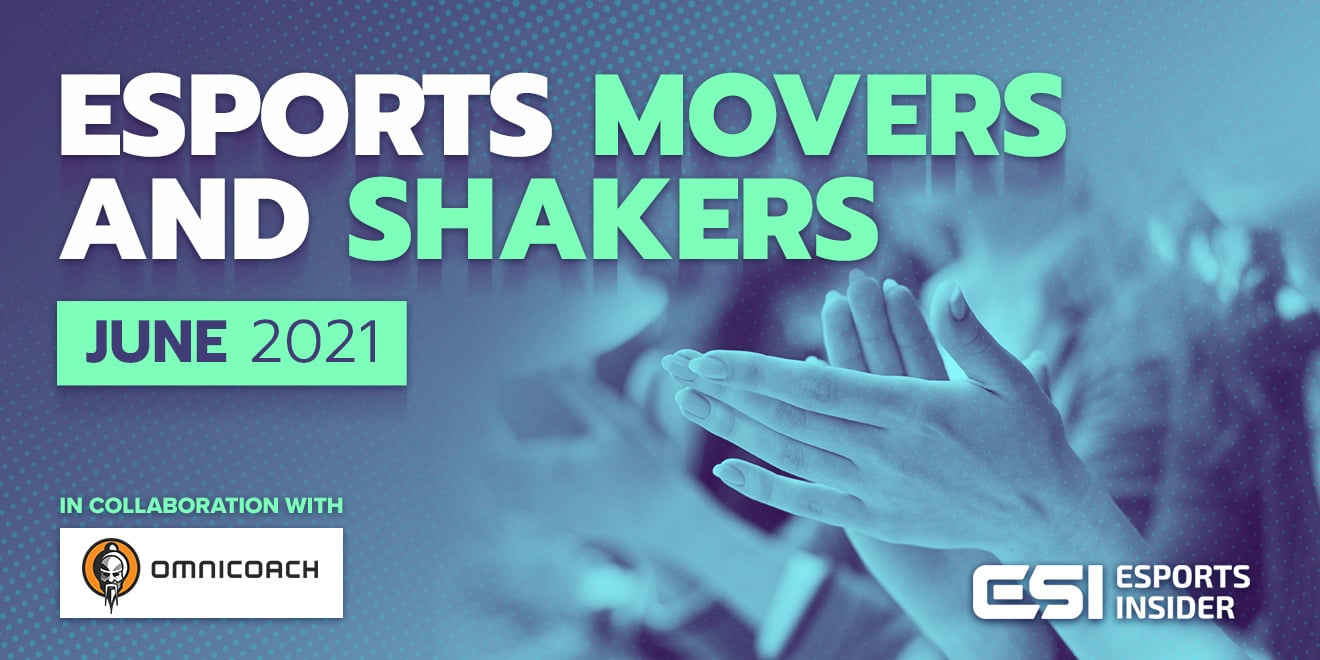 Esports Movers and Shakers in June 2021

Each month, ESI, in collaboration with Omnicoach, compiles the period’s most significant esports movers and shakers (personnel changes).Omnicoach is an AI company that has created a white label gamification and monetisation system that uses competitive video games — namely, League of Legends and Valorant — to engage and challenge target audiences.It can help teams, tournament operators, brands and more to better engage and monetise audiences more effectively.To learn more about Omnicoach’s offering, click here .Here are the key esports movers and shakers from June 2021.To read more about a story below, click the link in the corresponding title.Spotlighted story [Gen.G promotes several staff, strengthens C-level global team] Multinational esports organisation Gen.G has announced several backroom staff changes with multiple personnel being promoted.Clarissa Avendano and Martin Kim have been promoted to the positions of Chief Financial Officer and Chief Revenue Officer respectively.

In addition, Gina Chung Lee has been appointed as the organisation’s Chief Marketing Officer.The Gen.G Global Academy has also formally introduced Guan Wang, who was previously at education technology start-up VIPKID, as its President.To read more https://esportsinsider.com/2021/06/gen-g-promotes-several-staff-strengthens-c-level-global-team/ .[TSM FTX names Erik Marino VP of Apparel] North American esports organisation TSM FTX has appointed streetwear veteran Erik Marino, formerly of FaZe Clan, to the role of Vice President of Apparel.On his appointment, Marino stated: “It is an honour to join a premier esports org like TSM FTX, who I admire not only for their winning heritage but also for being pioneers in the business of gaming and esports on a global level.” To read more https://esportsinsider.com/2021/06/tsm-ftx-erik-marino-vp-of-apparel/ .[Fnatic COO Glen Calvert announces departure] At the beginning of June, Glen Calvert announced that he has stepped down as the Chief Operating Officer (COO) of European esports organisation Fnatic.Calvert joined Fnatic in early 2019 following a seven-year stint at Affectv (now Hybrid Theory), a company he founded.His next venture has yet to be revealed.

Marc Edwards, ORDER’s CEO, commented: “We are extremely excited for someone of Ryan’s calibre to be joining ORDER at a time of expansion and growth for the organisation.” To read more https://esportsinsider.com/2021/06/ryan-nejmanowski-joins-order-as-chief-development-officer/ .[Guilhem Causse joins Prodigy Agency as Head of Sales and Partnerships] Esports talent agency Prodigy Agency has appointed Guilhem Causse as its Head of Sales and Partnerships.In his new role, Causse will look to create commercial opportunities for players represented by the agency.This is Prodigy Agency’s second appointment this year.In April, the agency appointed Jordan Savelli as its FPS agent.

The programme’s newly-appointed Executive Director, spoke on his new role: “I am honoured to join the Training Grounds team as we expand opportunities for young people to experience the joy, community, and rigour of competitive gaming within a diverse and inclusive environment.” To read more https://esportsinsider.com/2021/06/samir-bolar-cloud9-executive-director-training-grounds/ .[eFuse appoints Halina Malik as Director of Content] Ohio-based esports startup eFuse has promoted Halina Malik to become the company’s new Director of Content.

Malik will steer the content strategy of eFuse, a platform that helps players build digital portfolios to network and find opportunities within the industry.Malik was previously eFuse’s Marketing and Partnerships Manager, a role she only held for three months.To read more https://esportsinsider.com/2021/06/halina-malik-efuse/ .

[London Esports appoints former West Ham CCO as Non-executive Director] UK-based esports organisation London Esports has announced the appointment of Karim Virani as a Non-executive Director.Alfie Wright, CEO of London Esports, spoke on the appointment in a release: “As a big West Ham fan, I’ve been in contact with Karim for over a year and he’s had a very hands-on role in shaping this organisation for a number of months now.” To read more https://esportsinsider.com/2021/06/london-esports-karim-virani-non-executive-director/ .Sign up to our ESI Dispatch Newsletter Supported by Omnicoach.gg.