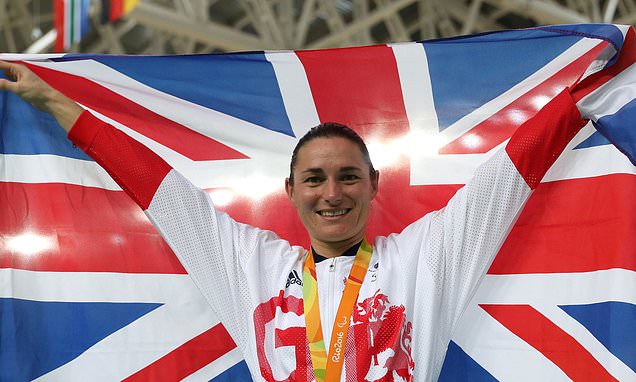 The mental calculations that go into making a good chocolate cake don’t sound like the typical concern of a sportswoman who is about to pursue a 15th gold medal on the ultimate stage and make British Paralympic history.But these have not been typical times.In lockdown , Dame Sarah Storey was juggling the challenges of home schooling her children Louisa and Charlie while trying to maintain her own elite performance level as a cyclist.’We did a lot of baking,’ she relates.’It works for maths, science and tech and all sorts of different parts of the school curriculum so it was ideal for us.’ Lemon drizzle or carrot cake, maybe? ‘It’s always a chocolate cake in this house.’ Storey’s mantra that ensuring the children are happy and settled makes a mother’s training more achievable goes back to when the children were new-born.The Olympic rower Helen Glover described before the Olympics how it was Storey she turned to for advice on these matters.

But it’s needed more than baking sessions to clear the obstacles to success at Tokyo which these past 18 months have posed.There was a total loss of race impetus, with no competitions for an entire year after the UCI Para-cycling international Yorkshire in September 2019.

Storey even started competing in cycling’s Esports world championships in an attempt to find the competitive edge again.The subject seems like the chance for a little sense of fun to enter this extremely serious conversation, though that never materialises.This was clearly not cycling’s equivalent of Ben Stokes and Johnny Herbert battling it out in virtual F1 cars.’I needed to keep the race impetus going,’ she says.’Races are such an important part of my programme.But there’d been no stage races.No travel abroad.It’s good to have other people attacking when you’re not expecting it and to have to respond to that in Esports brings a different level in your physiology.’ Storey would argue that there is no room for any levity when you are seeking the consistency which saw her become Dame Sarah Storey after London 2012, in recognition of 11 Paralympic gold medals in swimming and cycling.

There are 14 golds now.The first two, in swimming, were right back at the 1992 Barcelona Paralympics.She switched to cycling in 2005.Next week, she will go in search of the first of three more golds by seeking to defend her title in the C5 category of cycling’s 3,000m individual pursuit.

(C5 is for competitors with milder impairments.Storey was born without a functioning left hand.) In the second week, she will look to defend her time trial and road race titles.Already Britain’s most successful female Paralympian, two golds will take the 43-year-old past former swimmer Mike Kenny — who has 16 gold medals — as Britain’s most successful Paralympian.She will be up against compatriot and Rio Paralympics medallist Crystal Lane-Wright in all three disciplines.

We have just witnessed an Olympics in which athletes traced their success back to making the best of things in lockdown.Max Whitlock took a pommel horse home.Pentathlete Joe Choong set up a shooting range in his back garden.Storey’s equivalent was the turbo trainer machine she had at her home in Disley, on the edge of the Peak District.

‘I’d either use the once-a-day exercise allowance to do a training ride or I’d train on the turbo and use that exercise slot to take the kids for a walk,’ she says.Her husband Barney, a three-times Olympic gold medallist as the sighted pilot for blind or partially sighted cyclists, is a constant reference point in our talk over Zoom.’He did so much of the home schooling,’ she relates.As the Paras have neared, so the chance for competitive cycling has started to pick up.

Some athletes would not welcome their sport’s world championships, two months out from the Games.But the Para-cycling worlds at Estoril, on Portugal’s Algarve in June, provided a proving ground.Storey won the C5 class 25.2km time trial on the former F1 circuit there, as well as the 67.2km road race.

That event came a month after it emerged she had received a retrospective Therapeutic Use Exemption (TUE) following an adverse finding for levels of the asthma drug salbutamol in a urine sample at London 2012.Storey insists that that she was diagnosed with asthma as a child.She had ‘breathing difficulties’ immediately after winning gold in the individual pursuit, requiring the use of the inhaler.There is disagreement among former British Cycling doctors over who applied for that exemption.Dr Richard Freeman has said Professor Steve Peters, then British Cycling’s head of medicine, asked him to fill in some forms relating to the application.Peters denies this.Greater clarity would certainly have helped clear up this controversy.

Since Estoril, Storey’s training routine has taken her to Lanzarote, which offered unexpectedly good acclimatisation for the heat and humidity of Tokyo during her three-week preparation camp.’There were training days of 45 degrees,’ Storey says.’It provided me with a very good environment.I also lived without air conditioning out there.I went to accommodation that didn’t have the choice because if you’ve got the choice you or someone else will flick it on.’ Now back in the UK, she is going out on training runs with multiple layers of clothing.’It’s been quite a balancing act to make sure we get all the training that we have to do,’ she says.

She was engrossed by the Olympic cycling events concluding at the Fuji International Speedway track at Izu, where she will compete.’We were looking at gradients of the hills and the different layout of the track and how wide it is,’ she says.’We were analysing how other riders were riding, the speed of climb, the gearing they were using.Anything we could to get an idea of how to pitch and pace things.’ The chance to make history is not a part of her thought process, Storey insists.’The medals aren’t lined up in front of you before you leave the apartment so it’s not something you get reminded of visually,’ she says.’I’ve got 25 Paralympic medals that I’m going to be leaving here in the UK.To be able to go there and return with something to add to that would be amazing.’ For just a few more days, though, her training companions will be the ones who were with her throughout the foothills of this Paralympic preparation.The children.

‘They’ve been coming out to meet me with Barney, for the final couple of kilometres of my training runs,’ she says.’We’d just ride home together, with them on the kids’ bikes they just rock around on.Just the four us.’.