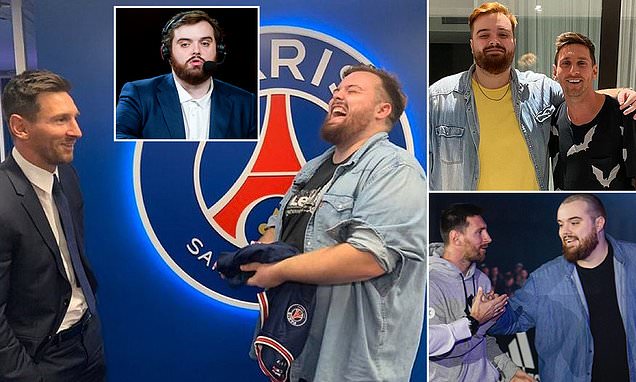 As the world’s top journalists scrambled to get an interview with Lionel Messi in a media frenzy at his presentation with Paris St Germain, one figure stood out among the suited and well-preened reporters.Decked in an open denim shirt and jeans and sporting a full beard, Spanish streamer Ibai Llanos, 26, stood on the Parc des Princes pitch taking in the moment as he prepared for his chat with the world’s most famous player in the most anticipated moment of his career.’I’m not going to ask him about Pochettino’s formation, we’re going to just have a nice chat with him,’ Llanos told his colleagues before following Messi down the tunnel to speak to the Argentine for streaming platform Twitch.While no members of Spain’s traditional media were able to chat to Messi, Llanos was in fact perfectly placed to get the interview everyone craved, as he had been invited to the player’s farewell dinner with the Barcelona squad the previous Saturday.But just how did the larger-than-life video game fan get to know Messi and how does Spain’s traditional media feel about the privileged access he enjoys? Sportsmail investigates…

SO WHO EXACTLY IS IBAI LLANOS? Llanos grew up in Bilbao in Spain’s Basque Country and began his path to the online celebrity he is today by commentating on a League of Legends match in 2014.He soon became a hugely popular Esports commentator and moved to Barcelona, where he currently resides.

In 2019 he made a comedy video which became the most viewed post on Twitter of the year in Spain with 116,000 retweets.His popularity truly rocketed though as the coronavirus pandemic struck and forced Spaniards into a brutal lockdown when they were only allowed to leave the house for medical emergencies or to go to the supermarket, while anyone under the age of 16 was not allowed out at all.More and more people started watching Llanos’ streams as a result of the lockdown and media interest in Llanos also grew.He has appeared on popular late night chat show La Resistencia and recently did an hour-long chat with famous television journalist, Jordi Evole, Spain’s answer to Michael Parkinson, who weeks before had interviewed Messi and a former Spanish prime minister.WHAT’S HIS RELATIONSHIP WITH FOOTBALL? Llanos is a huge football fan and commentated on FIFA matches for LaLiga last year when the season had been paralysed by the pandemic.His status in the video gaming community also led to him doing online streams with bored footballers who were unable to train during the pandemic and ended up spending more and more time playing video games.He struck up a close relationship with Sergio Aguero while the Argentine was still at Manchester City while chatting with the striker on Twitch.

He also got to know the player’s son Benjamin, sending him a Boca Juniors shirt which riled Aguero, who grew up a fan of rivals Independiente.He also formed a relationship with Barcelona defender Gerard Pique, interviewing the footballer this year and later doing a deal with the player’s Kosmos productions company to broadcast the Copa America, featuring Messi and Aguero, on Twitch.

SO HOW DID HE GET TO KNOW MESSI? Llanos was one of the privileged few people invited to Messi’s farewell dinner party last week after the Argentine confirmed his shock exit from Barcelona.But he had no idea he was going to meet Messi.Llanos had been invited out by Aguero, who told the gamer they were going for dinner at an exclusive restaurant with his brother and mum.Instead, Aguero drove Llanos to Messi’s house, where he was greeted by the Argentine.’There he was wearing a Batman t-shirt, Chicago Bulls tracksuit and with no socks on.

I felt like I was about to have a heart attack,’ Llanos told his viewers on a stream about meeting Messi.Messi then invited Llanos to travel to Paris for his presentation on Wednesday and interview him on Twitch.HOW MUCH DOES HE EARN? While Llanos might not have the shape of the elite footballers he mingles with, he does pocket a footballer’s wage.He earns a cool 1.4 million euros (£1.2m) each year alone from subscribers on Twitch, who pay five euros per month to watch his content.His earnings allowed him to live like a footballer too and earlier this year he bought a Barcelona mansion previously belonging to former Barca striker Samuel Eto’o, where he lives with eight other streamers.But he does not exactly live a celebrity lifestyle.He claims he does not wear top clothing brands as he is too big to fit into them, while he was turned away from an exclusive Barcelona restaurant despite having a reservation as he was wearing shorts.

Instead, he went to a kebab house.HOW DOES THE REST OF SPAIN FEEL ABOUT HIM? Llanos is hugely popular with the Spanish youth, with newspaper El Mundo calling him ‘the best known man in Spain..by your son’.But more traditional media are concerned with how he and other streamers such as DjMario are usurping them when it comes to scoring interviews with the biggest names in football.Many established journalists have criticised Llanos for being too pally with players in interviews and not asking the more difficult questions.

‘Every time Ibai Llanos interviews players it’s the same old story.He is an entertainer and his priority is not to explain the news or contextualise events,’ remarked Xavi Hernandez, journalist for Catalan newspaper Ara on Twitter.Prominent radio journalist Juanma Castano caused a far larger stir when he tweeted ‘I just don’t understand it’ after Llanos’ interview with Messi.Llanos responded: ‘Of course, I’m not a journalist and I don’t want to even compete with the press, I respect their profession a lot and have many journalist friends.

But I cannot turn down a chance like this if it’s offered to me, I’m sorry.’.