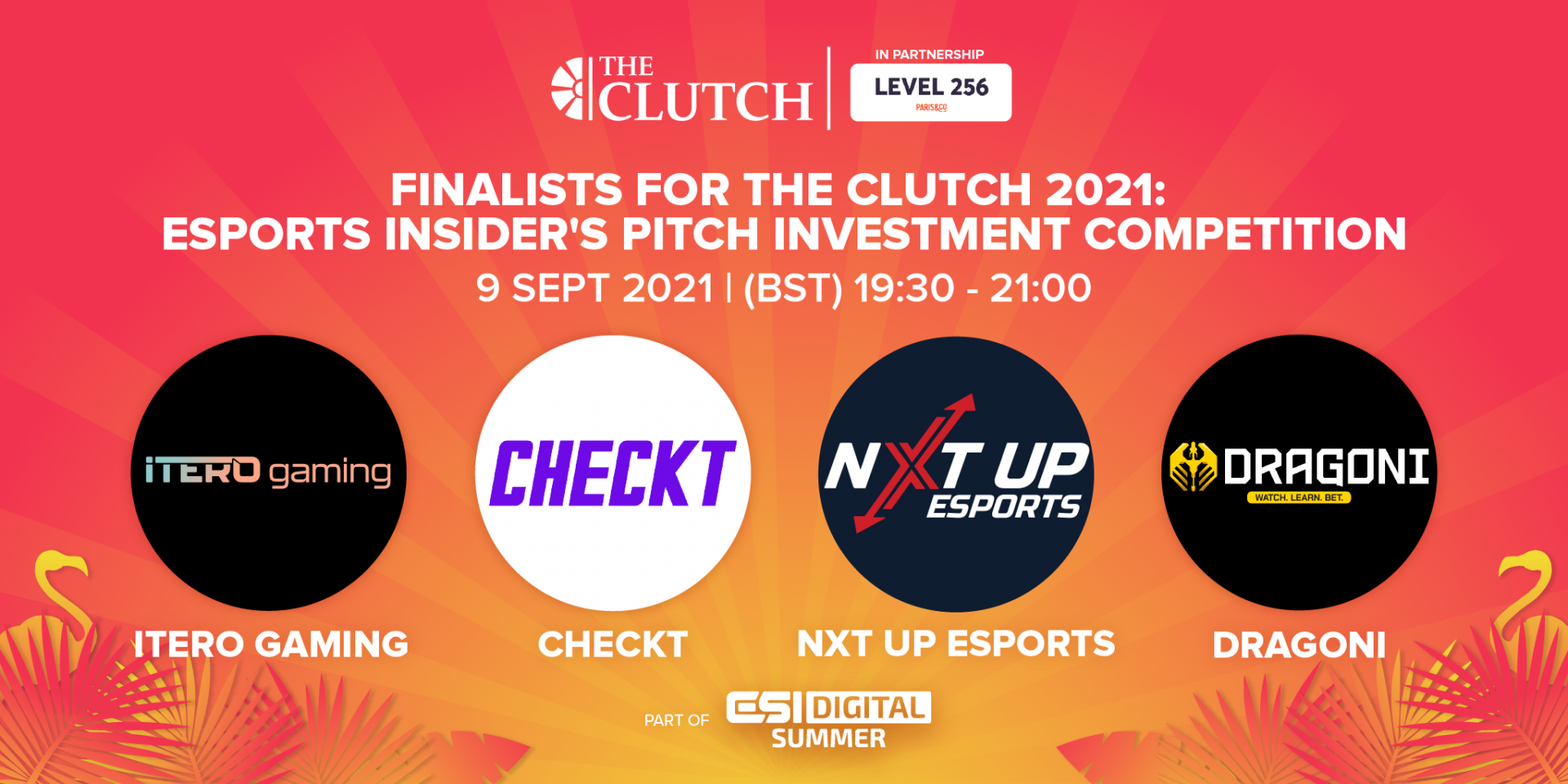 Esports Insider has announced the finalists for the 2021 edition of The Clutch , a pitch investment competition that provides esports focused startups with a platform to promote themselves and network with some of the industries most influential figures and brands.The Clutch will take place at ESI Digital Summer from September 8-9th.In addition, speakers from Faze Clan , Team Liquid, Moonton (Mobile Legends), Nerd Street Gamers, Apex Legends/EA, Ninjas in Pyjamas, Omnicoach and We Are Nations have been announced for the virtual conference.RELATED: Esports Awards announces 2021 industry finalists ESI Digital Summer’s full agenda can be found here , and tickets are available to purchase https://esportsinsider.com/esi-digital-summer-2021/#register .The Clutch, in partnership with Level 256 has become a focal point at ESI events with ESI Digital Summer hosting the fifth iteration this year.Judges for the competition include sought-after figures in and around the investment field from Hiro Capital , Gamesquare, Level 256 and HSBC Private.The winning company will receive an exclusive place in Level 256’s €5,000 incubator programme, alongside extensive promotion, and access to guidance and mentorship.The start-ups announced for The Clutch include: – [Dragoni] – An esports betting and data platform where users can search information on players, teams and matches across esports titles, and play real money wagers.

Sam Cooke, Managing Director and Co-founder of ESI, commented: “The Clutch has become a fundamental part of ESI events and we are thrilled that ESI Digital Summer is hosting the fifth edition of the esports investment competition.Receiving more applications than expected for another year in a row, we have once again worked hard to whittle it down to the final four.“With the industry continuing to grow, we are always looking for the most innovative and exciting startups to enter the esports space, and I’m proud to help those companies, providing a platform to showcase themselves and their thought-provoking ideas.” Speakers for ESI Digital Summer include some of the industry’s most influential figures and brand authorities.Sessions include: Day 1 (September 8th): – Moonton, ByteDance and Mobile Legends – Esports and Education 2021Confirmed speakers: Matt Watson – Head of Research, Learning & Development – International Federation of Esports Coaches (IFoEC), Ariane Lim – CEO – AcadArena, Annabel Lawday – International BTEC Portfolio Manager – Pearson, and Josh Williams- The NUEL – Founder – Prospects – is it commercially viable for esports teams to have academies?Confirmed speakers: Jonas Gunderson – NiP, Atle Stehouwer – Founder & CEO – Team Singularity, Erik Lydecker – Founder/CEO – Pluck GG, and Kieran Holmes-Darby – Co-Founder and Esports Director – EXCEL ESPORTS – Esports teams and revenue diversification – Talent management agenciesConfirmed speakers: Matthew Woods – CEO and Co-Founder – AFK Creators, Damian Skoczylas – Managing Director – ICON Agency, Justin Stefanovic – Misfits Gaming Agency, and Irymarc A.